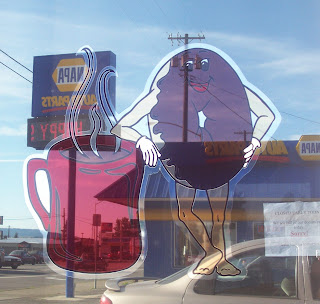 “The only thing that ever sat its way to success was a hen.” This is the most recent pearl of wisdom from whoever is currently behind the reader board at the iconic Davis Donuts in Coeur d’Alene. There was a time not too many years ago when the Davis Donuts sign wasn’t cute or even slightly uplifting, but was filled with scathing political commentary that would often cause such controversy that citizens would write passionate letters to the local papers decrying or championing its messages. People would wait anxiously each week for the next hot-button communication, which normally ranged from bitter commentary about government, church and society to angry call-outs of local politicians and newsmakers.

Rumor had it that these missives were concocted by a cranky old bearded fellow who could be seen in the shop many nights whiling away the wee hours with coffee, pen and notebook, but he was silent, unapproachable. The staff itself played dumb, claiming to have no affiliation with the mysterious author. Adding to the enigma was the fact that no-one could claim to have actually seen the sign being changed over.

The glory years ended one random day after a new owner took control and the sizzling eloquence was replaced with Hallmark-card schmaltz and even bible quotes. Horrors! Suddenly the very axis and equilibrium of local politics was thrown atilt, and some might say it never fully recovered. Nowadays, the sign features a mellow mix of motivations (“Go Ironmen!”), slightly snarky humor (“Men are from Earth. Women are from Earth. Deal with it”), and even a national-news making scorcher ("Duncan, Welcome to Idaho, a death penalty state. May you get your wish and die.")

Still, it’s not just a quote-worthy message board that’s made Davis Donuts into such a local landmark that people refer to Fo 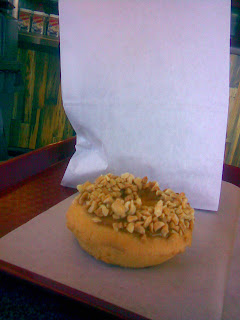 urth and Appleway as the “Davis Donuts Intersection.” It was only partially in jest a few years ago when folks suggested that the Coeur d’Alene Police Department relocated their headquarters to the north side of town to be closer to the place. Primarily speaking, it’s the soul-satisfying baked goodies that have consistently placed Davis Donuts firmly in the hearts of many North Idahoans and anyone else lucky enough to have dropped in during its long existence.

For many years, it was open 24-hours a day, but these days I’d highly recommend checking in as early in the a.m. as possible. Around here, when the donuts are gone, the donuts are gone and owner/baker Dennis Monroe is done for the day, case closed. I discovered this fact on a recent lazy Sunday visit when my main intention was to give their biscuits and gravy a go. I’ve been told by several raving local foodies that I absolutely had to have them in my little world. Of course, a visit to Davis Donuts wouldn’t be complete without at least one of their classic namesakes. Even at the semi-early hour of 11a.m., I almost missed the boat, and there were only five lonely items remaining in the massive glass display case. “That’s it?” I asked. “That’s it,” the counter girl answered dryly. “What’ll you have?” I peered in and took inventory of the situation. A plain donut with frosted maple and nuts. Two big bear claws. Two muffins, one chocolate and one blueberry with cream cheese filling. I decided on the frosted plain and a bear claw to go, along with the “famous” biscuits and gravy and an Oregon Chai tea with soymilk.

Right behind me, a young grandmother walked in with a couple of squirrely kids and ordered the last three items. The counter girl instantly killed the lights, flipped “Open” to “Closed” and hung a sign that said “Sorry - out of donuts - closed early.” Still, several groups of ladies all dressed up for church came shuffling in ready for apple fritters and maple bars, reacting with cold indignant frowns when Dennis apologetically shooed them away. Waiting for my breakfast, I noticed that since my last visit a few years 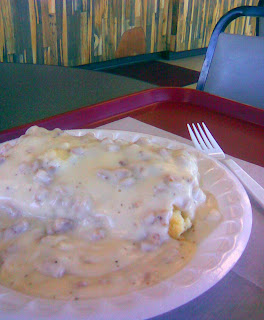 ago, the clinical white walls have been painted rusty red and mustard yellow, which adds warmth and personality along with along with a massive moose collection and an inviting “take a book, leave a book” shelf.

My biscuits and gravy arrived steamy and intense, and absolutely lived up to the hype. The biscuits themselves were fluffy and grand; more like little moist cakes, and as far away from hockey-puck syndrome as a biscuit can be. The home-made gravy just needed a sprinkling of salt and black pepper to hit perfection, rich and dense with salty, crisp diced ham chunks in the mix. It’s a huge portion and for two measly bucks it beats any other biscuits and gravy deal on the local market. I chased it with my peanut-sprinkled, maple-frosted plain donut, which was an excellent specimen, but not as memorable as the bear claw, which I ate later that afternoon. It was a paw-shaped glazed donut with a shamelessly messy crumbly crumb coating and an explosive sweet apple filling, and it was so brain-tinglingly soft and gooey, it made a Krispy Kreme donut seem tragic and sad like a Little Debbie Honey Bun.

I ate quickly, grabbing my Soy Chai to go and on my way out, noticed a sign on the wall behind the register that read “There will be a five dollar charge for whining.” A-ha! They sell off all the donuts early, then hang out and charge $5 to everyone who comes in and complains because they didn’t get their precious donut fix on time. With such a high demand, the owners of Davis Donuts must be getting rich this way.
Posted by OrangeTV at 12:01 AM

I love it. the police department wanted to be closer to it. Well, you know: cops and donuts go together like, well, cops and donuts. Bad cop, no donut!!!

What do they do to people who don't pay the whining charge? Call the cops and report them for them shoplifting?

Hello,nice post thanks for sharing all this with us. I just joined and I am going to catch up by reading for a while. I hope you still doing this amazing work because we need websites like this one to improve our knowing.
2j3j

Yeah actually I hate that place, they use to many fat on the food and I can't eat that...

I love the donuts on this place, seriously, they have the baest desserts in our country.

@bn196: So otherwise, you managed to have biscuits and gravy here that doesn't come close to what they serve.

Do you actually ever like anything you eat? Ever post you make on this blog you seem to trash the place in question, regardless of the food quality. And on most posts, then make a snide remark about the culinary tastes of the locals here. Makes me wonder what food you actually DO like.

I remember when they first opened.. I thought, these guys are never going to make it. Nobody in CDA is going to go to a freaking doughnut shop when Buttries ( spelling?) is just down the street... boy was I wrong,.... good ol Davis doughnuts Im happy they have been around for as long as they have...