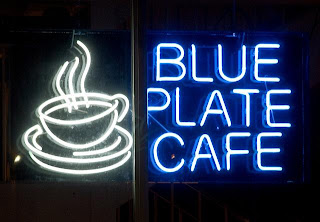 Breakfast plans were momentarily waylaid after cruising by the Blue Plate Café and seeing that there were more cars in the parking lot than there were square feet in the restaurant itself. Q. and I were mildly cranky after making the brave trek north in sub-zero temperatures through four feet of powdery snow on roads that made us feel like we were trapped in some kind of apocalyptic Iditarod nightmare. Weather conditions were so bad, we weren’t even sure the Blue Plate would be open for business, and even if it were would anyone besides us be foolish enough to venture out? It attests to either the popularity of the restaurant or the hardcore-ness of Haydenites that the answer was a resounding yes; driving by, the tiny building was overstuffed with eager diners. Q. was hesitant to deal with a crazy crowd, but I vetoed his objections. We would at least see how long the wait time was before instigating a Plan B.

Our rumbling tummies were giving off more attitude and sass than even Q himself could manage to muster. Entering the Blue Plate, we were immediately halted by a crowd of around a dozen folks waiting for a table to open up. Technically, there wasn’t a lobby so people just were just gathered willy-nilly in the aisles between tables or wherever they could grab some space. Claustrophobia was threatening to do a tap dance on my weary mind, and I was about to turn to Q and say “Forget it, let’s do IHOP” when the hostess announced “I have a table for two ready. How about you two?” she winked and pointed in our direction. Lady luck was serving our eggs sunny side up; everyone else waiting required tables for four or more.

We were certainly happy to have been seated so quickly, but the claustrophobia didn’t exactly fade away. We were sat at a wee table near the door, so the waiting crowd stood hovering right around us, all up in our hula hoops. We were officially squished and also involuntarily forced into feeling holiday cheer for directly next to us sat a cheery Christmas tree which threatened to collapse directly into our laps, it was so overstuffed with decorations and toys. Holiday tunes blared relentlessly overhead as cruel wintery breezes assaulted us each time the door opened to allow more sardines to squeeze into the can. “Popular place,” Q. observed dryly as we attempted to tune out the maddening crowd and focus our attention on the menu.

The idea of lunch must be taboo on Sundays at the Blue Plate; only breakfast items were on offer, but that was alright. We were still wearing our grumpy morning faces despite the early afternoon hour. The Blue Plate breakfast menu is a hand-typed, basic, black and white list of ordinary morning fare, nothing “f 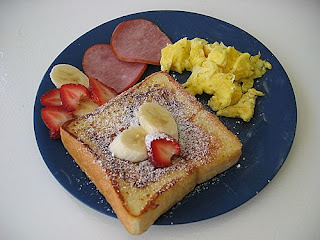 oo-foo” as Q. put it. A selection of ordinary omelets, an egg-potato-etc scramble, combos involving your choice of meat, toast, potatoes and eggs. Coffee. Juice. Most astounding were the prices, with nearly every meal right around the five dollar point. I decided to go for the “Frenchy”, which was French toast, scrambled eggs and ham. Q. opted for the “1-1-1”, a simple combo of bacon, a fried egg and toast .

Moments after she took our order, our waitress returned. “Hey guys, can I ask a favor?” she purred sweetly. “Can I move y’all to another table? We need to push some smaller tables together for a six-top.” Some might find the idea of being asked to suddenly relocate after fully settling in offensive and rude. I could just hear my mother, for example, freaking out at the notion and even I might not be so keen on the idea under different circumstances. However, with polar penguins waddling underfoot and the waiting crowd practically sitting on our laps, we jumped at the chance. Our new table was spacious and warm, a 4-seater located right next to the kitchen.

As we began to absorb the atmosphere from a better perspective, the Blue Plate’s true “mom and pop” nature began to reveal itself. The sunny yellow and blue walls are covered in bric-a-brac which looks culled directly from some Grandma’s country farm kitchen, and our waitress kept loudly referring to the cook-on-duty as “Hey Dad!” I poked my neck around the corner to see Dad in action and realized that he was the guy whose caricature appears on the front of the Blue Plate menu, bespectacled and stern, wielding a spatula as if it were a sacred talisman that holds many ancient and rare breakfast secrets.

Q. lustily pointed out the sign listing that day’s homemade pies, which included “huckleberry peach” among others. We became l 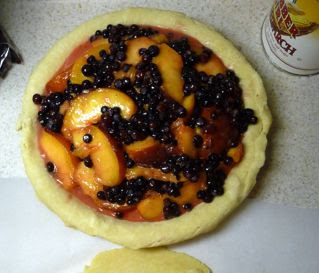 Our pie fantasies popped like bubbles upon the arrival of our breakfasts, and yes indeed, they were served on blue plates, a nice powder blue to be exact. My slice of French toast was as thick as a Nora Roberts paperback and just as fluffy, served sprinkled in powdered sugar and warm real maple syrup. My eggs were perfecto, and my slab of pit ham was tender and juicy and as thick and wide as my manly hand. Q. declared his rye toast to be “the best in town” (the truth, I know because I snuck a bite when he wasn’t looking), made even finer with the help of an actual jar of homemade blackberry preserves. His chunky, funky potatoes were crispy, golden-brown and perfect.

Service was exceptional despite the heavy business; it seemed we often had several waitresses busily buzzing around us at the same time. The only minor complaint we could conjure up was that the coffee seemed a little weak. We needed a caffeine boost to get us motivated to tackle the retail hordes and do Christmas shopping, but we couldn’t manage to catch a buzz from the thin brown liquid that was being poured. Two words for Dad and his fine crew: French Roast.

The tab arrived and the total made us laugh. We were tremendously satisfied and full, in fact we were too full even for any Huckleberry Peach action, all for approximately a ten dollar bill plus tip. A deal that economical is a mighty rare thing indeed and worth mucking through any amount of snow to find.
Posted by OrangeTV at 12:34 PM