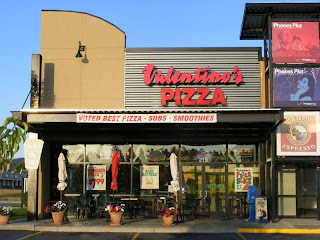 “Pizza is a lot like sex. When it's good, it's really good. When it's bad, it's still pretty good.” ~ Unknown

Stumbling upon a local pizza place that serves it up by the slice is always cause for celebration, especially when that place has nine tempting varieties of Blue Bunny ice cream to celebrate the discovery with. As someone who doesn’t mind taking a solo lunch break from time to time, I rarely get a chance to indulge in pizza simply because I don’t want or need to order an entire big old pie to myself.

Fresh, melty pizza is my favorite and most guilt-inducing food fetishes, and that right there is really the problem. A slice or two once in awhile isn’t going to cause my weight loss plan to crumble and croak, but an entire box of leftover deliciousness would put a definite strain on the threadbare fabric of my willpower and would end up chasing my light vanilla yogurt off the breakfast table the next morning.

With their massive selection of delightfully carb-rich pizza pies, sandwiches, baked treats and other goodies, Valentino’s in north Coeur d’Alene would actually even test the willpower of Dr.Atkins himself. Owner Charlie Taranto left no pizza stone unturned menu-wise, with a sprawling and unique selection of items based on the recipes of his father Valentino, a legendary name in the Chicago-style pizza scene.

From what I can gather, Taranto’s entire life has been spent basking in the radiant heat of the pizza oven, and tangy tomato sauce runs through his veins. He and his wife Candy ran a handful of award-winning take-and-bake pizza restaurants in Southern California in the early 80s, a time when take-and-bake was still a new and risky business concept. Obviously, the idea caught on faster than it takes me to incinerate a 99-cent frozen pizza, and by the time the Tarantos relocated to North Idaho and opened Valentino’s, people everywhere were taking-and-baking themselves silly.

The couple wasn’t content to simply rest on their laurels when they arrived in their strip-mall storefront across the street from the Silver Lake Mall. The addition of a row of cozy booths and some Tuscan décor was part of a logical expansion into actual restaurant-hood, and they didn’t stop there. Val’s Giant Subs are indeed colossal from what I saw, and are served up booth hot and cold on fresh, soft-baked rolls. Their signature sub, the “Santa Barbreque Beef” is a hefty little number, with thin-sliced roast beef cooked up with onions and smoky BBQ sauce and topped with melted mozzarella.

For those with a stronger knack for self control than I possess, Valentino’s serves five varieties of garden salads big enough to please two hungry tummies, and a Veggie Pizza on whole wheat crust that even brings zucchini to the party. Also on the low-fat fun list are their nearly two dozen smoothies named with a creative and somewhat surreal variety of names such as Strawberry Field, Oh My Papaya, Raspberry Romeo, Chocolate Cow, and Picasso. Don’t forget to top it off with a Fat Stripper Power Boost. 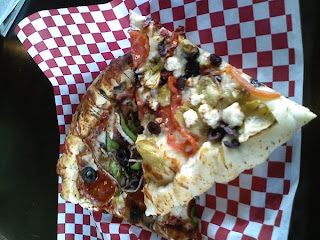 Naturally, Valentino’s pizzas themselves are the main hook and it’s not hard to see and taste why the restaurant was voted the region’s best pizza the last two years in a row in the North Idaho Business Journal reader’s poll. Along with the usual “build-your-own” setup, combos include the Hawaiian Delight, the Meat Lover, the Garlic Chicken with white sauce and the meatless Margherita Roma, which is as Italian as Don Corleone with Garlic Marinara, smoked provolone cheese, and fresh Roma tomatoes. Cosi Bello!

The Mediterranean delight seems to be one of their fastest flying specimens, as evidenced by the number of customers I heard speak its name up at the counter. I was fortunate to have arrived just as Taranto was pulling one out of the over to sell as individual slices for lunch. Feta, Mozzerella, and Romano cheeses; Artichokes, kalamata olives and sundried tomatoes; these are a few of my favorite things. The recipe is old school and in Valentino’s hands, reminds me of the beginning of a story once told by Golden Girls’ Sophia, “Picture it, Cicely, 1921…”

The thick, fluffy garlic crust was cut from the Chicago-style mode and was good enough, I would have eaten it by itself. Toppings were generous and my two slices were served piping hot, something that can be an occasional issue with pizza-by-the-slice. No problems here, and although I was pretty stuffed, I wasn’t feeling so full (or guilty) that I couldn’t sample a kid’s cone full of “Bunny Tracks” ice cream, a rich vanilla laced with tiny chocolate-peanut butter bunny rabbits.

Whether you take it and bake it, shake it or steak it, Valentino’s is a truly fantastic, locally-owned alternative to the ubiquitous national pizza and sub chain restaurants, and its memorable fare and charming personality put it at the top of the lunchtime heap.
Posted by Patrick Jacobs at 12:00 AM

I have only been there once and the crust was horrible. Flat and cardboard like. Not at all like your picture or description. I might have to check it out again on my next Ross excursion.

We get 2-3 pizzas a month from Valentino's and it is the best, much better then Papa Murphy's take home. Great food and they make it how we like it.

Their subs are excellent. Also, the chicken caesar salad, for around $6 is a healthy meal and a half.

For take and bake, though, I think they're the best around. The $6.99 specials are what we go for. I can't eat Papa Murphy's or Domino's or any of those chains. Talk about your cardboard crusts!

I'm ready to eat and eat and eat a lot of pizza master! for now I owe my life to you, you make me discover one of the best places to eat pizza over this country.

Well actually ones I saw something really disgusting in this place that I never get back, this was 3 months ago and I told people to not go, they should watch closer what are the employees doing instead they cook.

$3.71 for one slice!!! I don't care how good it is "supposed" to be. And the attendant at the counter was an arrogant old man.

I've just downloaded iStripper, and now I can watch the sexiest virtual strippers on my taskbar.