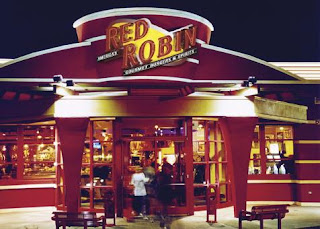 Some pink or no pink? It’s a question on the lips of thousands of smiling Red Robin servers across the USA and Canada. They’re asking if you want your burger cooked either medium or medium-well, but the question is evocative of something that might float through the mind of a fine artist at work. A dab of orange here perhaps, a few splashes of green there, tough to decide on the pink. It’s actually an oddly appropriate connection to make. Red Robin restaurants are like the Pop Art movement of the 60’s, taking a mundane everyday concept, the burger chain, and presenting it in a cartoonish, somewhat ironic and ultimately appealing way.

Appropriately, among the dozens of framed images of Hollywood icons and posters for classic films that adorn the walls of the Coeur d’Alene Red Robin, hangs a print of Pop artist Andy Warhol’s famous bright red portrait of Jackie Kennedy and a large black and white photo of the bewigged artist. Warhol was fond of mass-producing many screen printed canvases with the same image, and although they do vary slightly in image placement and application, many are basically the same. 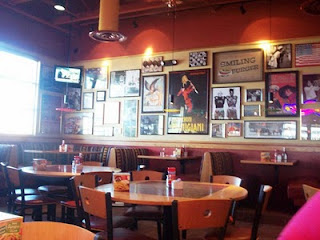 And so it goes with Red Robin, which started out in Seattle’s Eastlake neighborhood as Sam’s Red Robin Tavern in 1969, but in the last thirty years has multiplied itself to almost 500 restaurants across the country. The Coeur d’Alene store opened up a little over two years ago and has been hopping ever since, many times packed with folks on their way to or from the nearby cinemas who’d rather spend twenty bucks on a good meal than on a bucket of popcorn and a small soda. People flock here for a comfortable, predictable experience and service is generally fast enough to get in, eat, and get out quickly so they’re not late to the next showing of “Alvin and the Chipmunks: The Squeakuel”.

Our local Red Robin has all the required quirky trademark elements that make every Red Robin a Red Robin. There’s the aforementioned clutter of framed eye candy, the interestingly placed televisions, a miniature Statue of Liberty greeting visitors at the front door and the larger-than-life, Woody Woodpecker-esque statue of their mascot bird. Their menu is as eye-popping as the atmosphere, printed on a poster-sized, laminated sheet that’s lurid with colors and food imagery.

The mainstay here is the burger, of course, and while it’s easy to make fun of them for bandying about the slogan “Honest to Goodness” while serving burgers that likely arrive on site frozen, I’ve never had any major complaints about the end product. I’ve only dined at Red Robin a handful of times, but I have managed to sample several of the 20-or-so burger creations offered. The A1 Peppercorn Burger is kind of a monster, piled with bacon, Pepper-Jack cheese, crispy onion straws, zingy A-1 peppercorn sauce, all on an onion bun and was pretty good, but I’d have to say I prefer the Bleu Ribbon Burger because I’m a sucker for the marriage of bleu cheese and ground beef, and the swipe of chipotle mayo is the honeymoon. 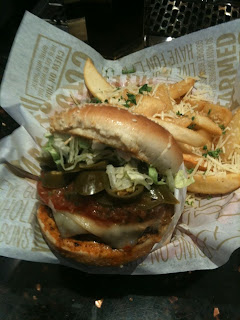 The accompanying steak fries are usually quite satisfying as well, nice and mushy in the middle but with a golden-crispy shell. It’s a little disconcerting that they only give you about ten fries initially but they are “bottomless”, and to keep their little legs from getting cold with no pants on, Red Robin covers them with shreds of fresh, melty parmesan cheese. The Towering Onion Rings are served piled high on a stick and their presence as an opener is a must, along with their severely habit-forming Artichoke & Spinach Dip.

My most recent appearance at the Riverstone Red Robin was for a rainy-day lunch with a friend who frequents the place more than is probably really necessary. Our server, the enchanting Miss Allie, waved to him in recognition as we pulled tall chairs up to the bar, and came around a few moments later to visit and take his order for “the usual”; the sinus-clearing 5 Alarm Burger with Pepper-Jack cheese, jalapeños, and fresh tangy salsa.

I decided to behave a bit with a soup and salad combo, tempted mainly by the prospect of French Onion Soup. It wasn’t as good as some I’ve had, brought down by the severe sogginess of the floating bread layer, but with the mass amount of bubbly melted cheese, it was passable enough to avoid a return trip to the kitchen and a nasty stink-eye directed at the cook. The accompanying side salad was sufficient but unremarkable, only perked up slightly by a sprinkling of red tortilla chip strips.

I’ll inevitably return to Red Robin, as we all eventually do. While it may not be the most singular and unique food option out there, like Pop Art it does reflect American consumerism in a creative and oddly fulfilling way.
Posted by Patrick Jacobs at 12:01 AM