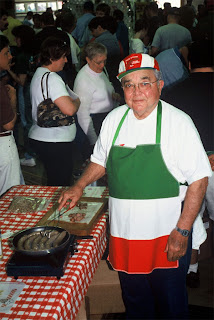 Think about smiling country folk, white scarves on their heads, gleefully stomping grapes with bare feet and making wine the old fashioned way. Think about heaping plates of fresh pasta piled with rich sauces stewed all day long, just like Mama used to make and served with loaves of oven-warmed bread. Think of warbling folk singers operatically expressing the agony of romance, or bearded artisans selling their finely crafted wares to passersby on the street. Think of a place with a three-syllable name that starts with the letter “I”.

Italy, you say? Wrong, my little manicotti. It’s our very own Idaho, at least for this weekend as Post Falls’ Bonaventura Lodge 2814 presents the 3rd Annual Festa Italiana at the Kootenai County Fairgrounds in Coeur d’Alene. The Bonaventura Lodge is the local chapter of the Order Sons of Italy in America, a group established in 1905 as a mutual aid society for Italian immigrants and as an excuse to wear an Armani suit and drink Campari. Today, the OSIA has over 600,000 members and according to their website their missions include “encouraging the study of Italian language and culture in American schools and universities, preserving Italian American traditions, culture, history and heritage and promoting closer cultural relations between the United States and Italy.”

They also firmly believe in throwing a totally bananas, weekend-long party and inviting the whole town to share in the festivities. Admission’s free and parking is $1.00 per vehicle with money earned going to the youth group collecting at the gate. In fact, all proceeds raised by the lodge during the Festa go directly back to community youth and school groups in the form of scholarship and donations, so you can eat some extra cannoli guilt-free, knowing you’re helping a child in need by doing so.

The action kicks off today at 10:30 a.m. with an opening ceremony that won’t quite rival that of the Beijing Olympics earlier this year 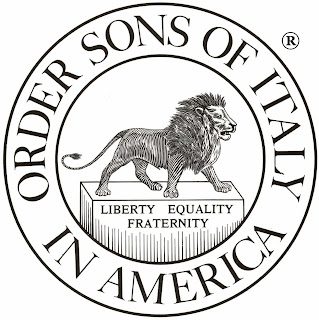 , but should still create a few semi-pleasant mid-morning moments. First, the national anthem will be interpreted by an as yet un-named Post Falls High soloist, followed by some color guard action and then the Legion of Mary show up to do whatever fabulous thing it is they do. The entertainment line-up is literally all over the map, even incorporating the St.Patrick’s School Irish Dancers, representing yet another place with a three-syllable name that starts with an “I”. It’s truly not an everyday occurrence to see Irish folk dancing at an Italian festival in Idaho, but it seems like anything goes here at the Festa.

Event headliners The Singing Nuns of Mt. Saint Michael will be performing today at 1 p.m. One of Spokane’s hottest “pop groups”, these ladies have recorded over a dozen albums and even appeared on the Merv Griffin show in 1981. Things continue in rollicking fashion with the senior dance troupe Lake City Tappers, who are chased offstage by the Nonini Strings, a group of 16 violinists aged 3-15. According to the schedule provided by the organizers, both Saturday and Sunday evenings at the Festa finish with several hours of “Italian Music” from a mysteriously unspecified source. By that time, everyone will probably have had too much vino to even notice or care where the music is coming from anyway.

Naturally, the big draw of the Festa Italiana is the probability of extreme indulgence in the food and drink department. The Bonaventura Lodge themselves will be serving up Italian Sausages with green peppers and onions, hot meatball sandwiches, and a dozen flavors of Italian sodas. Pizza will be provided by the Pizza Factory and the friendly neighborhood Schwann’s man will be frying up artery-enriching goodies like pizza rolls, mozzarella sticks and jalapeno poppers. Desserts by Gelato Joe’s, Bakery by the Lake, and Chiappe Pastries will be on hand so you’ll have no trouble inducing a nice sugar coma to go with that immobilizing pasta bloat.
One of the highlights of the Festa is sure to be the hourly “Bolla Grape Stomp Competitions”, the idea of which brings immediately to mind hilarious visions of Lucy Ricardo wrestling wildly in a wine vat with her professional grape-stomping partner and nearly drowning. If you want to roll up your jeans and feel the grapes squish-squash between your toes, you actually have to sign a waiver attesting to your physical fit 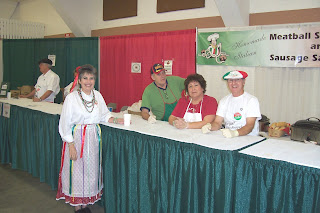 ness and releasing festival organizers from all liability in case of ”injuries or damages”. The objective of each three-person team is to crush the most juice from 20 pounds of grapes in four minutes with the least amount of bruises on your behinds.

There’ll be plenty of non-food ways to laugh in the face of the shattered economy and spend some cash as well. Dozens of featured merchant booths will be vending everything from jewelry, spices and lotions, to diaper bags, salad dressings and lawn sculptures. Italian food would be all stuck together if it weren’t for olive oil, and the Coeur d’Alene Olive Oil Co. will be on hand with more varieties than anyone knew existed. With carnival games, jumping castles, face painting and a fake tattoo booth, there’s plenty of ways to keep the kids entertained, at least for a few minutes before they show up and start annoying you again. Hide out in the beer and wine garden where you can build up the liquid courage to belt out a Sinatra tune at the all-Italian Karaoke contest.

Question: What is your favorite Italian meal?
Posted by DFO | 6 Oct 4:01 PM

My favorite Italian meal is also one of my favorite days during the year. Being from an Italian family, we all get together once or twice a year to make fresh Ravioli, Tortellini and Fettucini. We make two different stuffings; one is a prosciutto and italian sausage, the other is a spinach and cheese. Then we make marinara, pesto and three cheese sauces to place on top of the pasta. Add on a bottle of wine or three, and it is definitely my favorite Italian meal.
Posted by Dr. Chuckles | 6 Oct 4:19 PM

Dr Chuckles - may I PLEASE become a member of your family????

I love ALL italian food - and my general shape is exhibit A.

The Italian Festival was great this year. The Ferrari's at the entrance were fun to admire.

As for food, I had a meatball sub and a cannoli from Chiappe Pastries.

I really enjoyed the sisters from Chiappe; they were very sociable, fun and defintely put out an authentic spread.