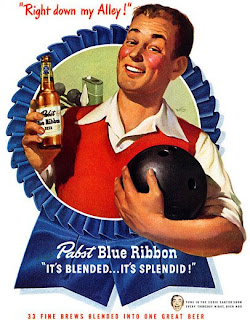 2. Pabst brewing company was founded by in 1844 in Woodridge, Illinois by Jacob Best. His great-great-great-granddaughter is actress Caitlin O'Heaney, who once modeled for Salvador Dali.

3. Pabst is renowned in Milwaukee for its brewery tours where a massive statue of King Gambrinus greets visitors. King Gambrinus is the patron saint of beer.

4. It's the beer swilled by hipsters in every Indie Rock bar from Tacoma to Tallahassee.

5. The can boasts proudly, "This is the original Pabst Blue Ribbon Beer. Nature's choicest products provide its prized flavor. Only the finest of hops and grains are used. Selected as America's Best in 1893."

6. More recently, in 2006, it won top honors and a Gold Medal at the Great American Beer Festival, with the judge saying, "A contrasting counterpoint of sharp texture and flowing sweetness is evident at the first sip of this historic brew. A slowly increasing hoppiness adds to the interplay of ingredients, while the texture smooths out by mid-bottle. The clear, pale-gold body is light and fizzy. Medium-bodied Blue Ribbon finishes with a dusting of malts and hops. A satisfying American classic."

7. It was the brand my late grandfather would drink a full 24-pack of in one sitting out on the fishing boat at 5:30 am.

8. Seems like the microbrew craze has died out a bit in favor of a return to the old classic lagers. For years, I kept telling the owner of my regular haunt to bring in PBR on tap but she thought I was nuts, calling it "old man beer." She finally started serving it a few months ago and it's become her top selling beer. A pitcher is a dollar cheaper than the other domestic brands. I've seen some places with PBR on special for as low as $3 a pitcher.

10. Some Pabst hardcorists claim that the only way that it should be consumed is from a can. Something about how the metal provides a flavor element that kicks it up a notch. I've tried both canned and draught and couldn't really distinguish any major difference between the two. Of course that was after I'd already had a few so who knows?

Oh Anonymous, there's nothing worse than a beer snob. You come to my party, have fun drinking water I guess.

PBR might very well have been America's best beer in 1893. Heck, had they stuck with the same recipe, it might still have been the case. Yet they didn't. PBR, Bud, etc. changed recipes after the prohibition to better serve the weakened palettes of the masses. Sad but true: the beers were deliberately "dumbed" down from what they used to be.

But hey, to each his own.

Well, in reality I do like all kinds of beer brands and I'm not devoted to one brand over the other, but I do like PBR because it's easy on my poor wallet and I can drink lots and lots without feeling like I just ate a loaf of bread, which is how I react to many of the darker beers or micro brews. I like those too, but sometimes an ice cold, weak, American, dumbed down PBR just hits the spot.

Question: Which classic beer is your favorite?
37 comments on this post so far. Add yours!

OTV, I kinda liked your orange circle avatar. Why on earth are you using Stephanie's picture?

Stephanie rocks, so I changed my avatar to her for a day. I wasn't really expecting DFO to use it for my byline photo LOL. No amount of hair color and makeup could make me look even close to the lovely and talented Ms. Vigil. Question is, I wonder if Stephanie drinks Pabst Blue Ribbon too…

OK, so I changed my avatar back to avoid confusion between myself and my fave anchorwoman (an obvious mix-up) but Stephanie remains atop this post. I like the incongruity of that, actually.

I'll have to go with PBR too for quick, cheap drinking.

For a bit spendier, and still cheap and not very good … bud light.

Oh, Jbelle, that has me recalling my days in St. Maries with my first editor, Ralph, who always drank Miller High Life. As he thoroughly pointed out to me … it's the champagne of beers.

Sam, that Ralph is right on!

My new classic beer favorite, by the way, is Stella. yumola.

My prediction is that PBR will begin to take over market share from budweiser as more people come to realize the irony of Bud advertising itself as “America's Beer” while being owned by a dutch corporation. PBR is a darn good beer.

JBelle: One after my own heart. Stella.

Here something to ponder. Is PBR is the last American beer? PBR is only a virtual brewer these day, all of it's beers are brewed by Miller. And Miller, is a division of SABMiller, a London based company that is orginally from South Africa. So who does that leave us with, Coors? Yuck. If you want to drink American, drink micros!

Thanks cyrts! I do like Stella too, but it's a little strong alcohol wise and sneaks up on me.

So I like Stella and Guinness - and I do really like Micholob Ultra. But that is more of a hot summer day out on the river beer - ICE cold.

as far as the question, I don't know if I have a classic beer favorite. I'm sentimental for Lucky, but not for any taste reasons, and only when I can find it in stubbies.

Back in the day, Pabst was the beer of choice, along with Hamm's if you happened to be in Southeast Asia. Though mostly warm, we found ways to chill the stuff. I usually traded for other things, though not to mention here. Now, Bent's brew is the one to die for. An upcoming event is on the horizon, which may feature his outstanding stuff, so keep your antenna tuned. It may be the event of the year, though I can hardly handle the crowd. But, I will never back down for an event that has Bent's brew in the mix. We will see. I hope Bob comes, as I know he will.

And to keith, who turned me on to such a brew, though it's hard to afford at times. Keith and JBelle have the right idea, ones after my own heart.

Wow, even Coors has been sold off? Is there any major American brewer left that actually brews beers?

If I have to pick one, it would be a private brew, Bent's of course.

Thanks for the update Idawa. Those darn red white and blue cans fooled me. Drinking local sounds like the way to go. I'm glad laughing Dog is cranking 'em out. I've homebrewed before and will be getting back into it soon, as I gave a friend half a batch of a future brew as a birthday present.

When it came to drinking beer
I was not a miser
The next day I'd be hung-over
And sadder, “Bud” no “Weiser”.

Yeah, I used to gulp it down. Bud in the tall bottle. I also enjoyed Kilian's Irish Red, On Tap. The worst beer I ever had? No question: Lucky Lager. I used to drink the cheap beers, too…such as Cascade. I also thot Hamm's was pretty good. But then again, who drinks beer for the taste, right?

Finally, a witticism from my Dad…he once told me about the 'pistol club'. I asked him what that was, and he said, “Drink 'til midnight, 'pistol' dawn”.

Escapee: I drink beer for the taste. Not to get drunk, never my point. It's why I like the Bent version of the stuff.

Gueiness and Laughing dog cream ale if i have a choice. Miller Lite for the domestic variety.

Sam Adams is an American brewer, isn't it?

Yes, Sam. Sam Adams is one of the very last American breweries to hold ture to the traditional brewing style (but I am not sure it is all brewed traditionally). In fact, I just saw on the History channel yesterday that they have bred a yeast that will live beyond 12.5 % alcohol (the point at which most brewer's yeast die). They have a 25% naturally fermented beer. That is amazing, and that is a beer I intend to try next (to consume, not to brew because I doubt anyone can get their hands on that yeast).

“My new classic beer favorite, by the way, is Stella” — Jbelle

Thank you for turnning things around Jbelle, I was just starting to mist up over the whole canned beer discussion…

OTV, you must try my next batch…

I had a friend here who brewed his own but then he left. And I know nobody else who is into the home brew scene. Too bad.

Gennesse cream ale. But you can't get that out here…

Sam the skunky flavor in beer occurs when it is exposed to UV light rays, or too much sunlight. Green and clear bottles allow a lot more UV light through than your traditional brown bottles. Some beer intentionally skunk their beers with the UV light, corona is one of those.

But most of the time, a some one stocking the beer at the super market made the mistake of putting green bottle beers too close to the lights in the beer cases.

If you buy Stella in a case, it usually comes in a carton that doesn't even have hand holds cut into the box. absolutely no light gets to those bottles until it hits the store shelves.

My favorite is a rice beer called OB. Seattle and a few other west coast cities are the only places I have been able to find it. Very smooth stuff.

hmmm, Dennis, you may have solved a puzzle for me. I'm just not a beer drinker. But many years ago when I was in China, the choice of beverage at a meal was (honest) orange pop or beer. They put a few bottles of each in the center of the table. Water wasn't, of course, an option, nor was tea, even. There was considerable sediment in the bottom of the pop bottles, so I tried the beer, and it tasted ok, even to this non-beer-liker. I wonder if it was a rice beer…

florined, it's almost a garuntee that the beer you had in China was a rice beer. I know other folks like you who are not much of beer drinkers but like the rice beer.