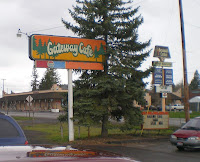 We Came, We Saw, We Sniffed, We Ate Pickle Chips.

To the owner of Gateway Café: Christina really deserves a raise, or at least a big hug and some dark chocolate. The poor girl found herself in the undesirable position of running the entire front of the house solo on a busy Sunday, but she held it together with a stoic smile superglued to her face. She had us a little worried at first, as we hovered in the entry way for a few long minutes waiting in vain for guidance. A customer finally said we could just sit wherever and the waitress would eventually find us. We shimmied into the only booth left open, located directly next to the restrooms.

“Mmm. Smells like Smarties.” mentioned Q. I took a deep sniff of the air and grimaced slightly. ”Smarties? You mean, like the candy?” I had to clarify first, just to make sure. “Yeah, smells yummy!” he bubbled. “Um, I hate to ruin your little moment,” I sighed wearily, “but what you smell is a fresh toilet mint wafting at us from the men’s room. Yummy, indeed.” “Oh,” he winced, “never mind.”

The Gateway Café’s theme is “God Bless America.” The walls are painted patriotic red, white, and blue and American flag gewgaws mingle with framed photos of military friends and relatives on active duty. “In God we trust, all others pay cash,” announces a sign near the door. It’s not exactly Ruth’s Chris Steak House, but it is clean and comfortable. In fact, I’ve don’t think I’ve ever sat in such a relaxing, spacious booth seat. It was overstuffed and it sucked me right in; I never wanted to get up again. I kept trying invent clever ways we might be able to sneak out the door with the whole thing and take it home.

It only took a few minutes for Christina to arrive with some menus and an apology. “Sorry if everything takes a while, there was supposed to be two of us today, but that obviously didn’t happen.” She rolled her eyes with angst as anxiety crept across her sweaty brow. I wanted to ask for the gory details about why her rude, inconsiderate co-worker didn’t show up, maybe give her a chance to vent, but I figured it was probably safer not to tread into those waters. “That’s okay; we’re not really in a hurry,” I lied.

We stared at the menu, waiting for something to jump out and grab our eyeballs, saying “Eat me! Eat me!” It was mid-afternoon, but the Gateway Café serves breakfast all day on Sundays so we considered the option. H 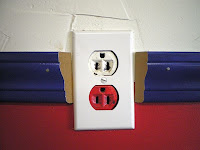 uckleberry Pancakes definitely created a strong quiver on my breakfast voltage meter, and it’s always hard to say no to my old best friends Chicken Fried Steak and Scrambled Eggs. Also tempting were the omelets galore, the Good Morning Pork Chops, and the ever-popular Hot Oatmeal with Toast.

Looking at lunch options, I immediately vetoed the burgers. As much as I love a good bacon cheeseburger, sometimes I feel the need to experiment. However, uncommon culinary possibilities are tenuous at the Gateway Café, so I went for a comfort classic, the Hot Ham and Swiss. Sandwich standards like the Triple Decker BLT, the French Dip, and the Clubhouse Grill may not be exactly far-out, but along with Fish and Chips, Taco Salad and a 21 Shrimp Basket, they make for a refreshingly vintage line-up.

We forgave Christina for taking twenty minutes to return, but I was so dying of thirst that I was about to go behind the counter and pour my own Pepsi. “One more minute, guys!” she called out and she did return momentarily, totally out of breath, to take our order. She did and we settled in for the long haul, expecting our food to arrive sometime within this or the next astrological cycle, unsure about spe 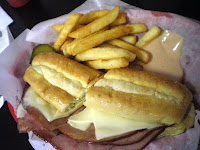 cifically when. We were flabbergasted when she returned barely two and a half minutes later, arms loaded with our lunch. “I don’t know how that happened so fast, I really don’t,” she marveled to us, still smiling, before running off to continue working her aching, tired feet down to the bone.

My sandwich was remarkable. Grilled ham, sliced thin and tender and juicy, piled high and topped with creamy melted Swiss on a fresh white Hoagie Roll served with no frills, just a couple of pickle chips and some chunky golden fries. Q. rated his ¼ pound Knight Burger an 8 out of 10, saying that the ham was succulent and smoky and that the lettuce and tomato were perfectly cold and crisp. Prices were astoundingly low for the amount of food and quality of cookery. Honestly, we weren’t expecting such memorably delicious meals and Christina left a positive impression despite the frenzy. The simple, rich experience of the Gateway Café comes from a mixture of American pride, old-fashioned greasy grill love, succulent karma and magic Palouse sun dust.
Posted by OrangeTV at 12:01 AM

The slice of pie with ice cream was huge - split it for sure. Great service and a nice little place