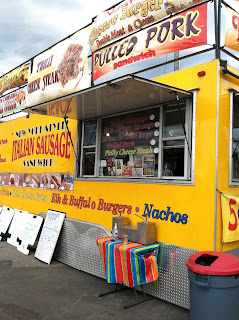 "Bacon bacon bacon! It's meat candy and free today on any item!" This is just one of several totally cute and enthusiastic text messages I've received on my iPhone in the last few weeks from the folks that run the Big Yellow Mobile Kitchen. While waiting for my food, I was prompted to join their text list by a sign in their window asking me to do so, and I was bored so why not? Who am I to say no to such a request. Now I feel like I've got a new friend, someone who actually texts me once in a while about something way more interesting than what any of my other friends text me about: delicious, greasy food truck food. I love it.

If you live in Coeur d'Alene, you've probably seen this yellow food truck many times. If not in the parking lot at Goodwill on 4th and Harrison, then at one of the many events they get invited to serve food at (most recently at the dog show at the fairgrounds, according to once of their friendly texts). It's been there for a few years, but I never bothered to get out of my Mercury Mystique and visit it until recently - it just felt a little off to me, like a carnival wagon or something, with all of its loud, wild-font banners flapping at me in the wind and rows of dry-erase signs announcing never-ending daily specials.

Also, I frequently wondered, does this sun-yellow grease truck even have a name? I finally figured out that indeed it does. In a stroke of simplicity and obviousness, owner/operator Timothy Patterson christened it the Big Yellow Mobile Kitchen. Why bother with formalities like a creative name situation when you have dank food and catchy friendliness on your side, I suppose.

"Tim Patterson is the quiet hero we should all look up to. Forget drugged up Hollyweird celebrities." CDA Press commenter "heatherfeather" wrote this in response to an article reporting how the yellow food truck owner foiled a knife attack in the Goodwill lot by politely pointing a gun at the crook's face and shouting "drop it, or I'll shoot you". As much as I do love drugged up Hollyweird celebrities, I will give kudos to Mr. Patterson for stopping the creep from stealing the woman's valuables and cash.

Mr. Patterson is also quoted in the article as saying that he lives by what he calls the sheep dog, sheep and wolf theory.


Wolves, he said, are the bad people. Sheep are the innocent ones. Sheep dogs are law enforcement and other "good men not willing to stand by and let evil triumph."


Incidentally, wolf burgers, sheep burgers, and sheep dog burgers do not appear on the menu at the Big Yellow Mobile Kitchen. BUT. Other wild animal burgers do. Specifically, the Buffalo Burger, which is a 1/3 pound real ranch grown USDA buffalo, and the Elk Burger, a 1/3 pound locally grown USDA certified elk patty on a bun with all the accoutrements of a normal, boring cow burger (which is really my personal preference, as I'm not much of a fan of gamey style meats).

Elsewhere, their miscellaneous list of options includes Italian rope sausages, pulled pork sandwiches, hand dipped corn dogs, big pretzels with cheese, steak and chicken wraps, nachos, hot pastrami sandwiches, a $2 grilled cheese, and even a PB & J sandwich for the kiddos (or for the grown up PB & J junkies like myself). For such a little "big" food truck, they really do have a diverse line-up of guilty pleasures to choose from.

On the "have you lost your damn mind" side of things, the "Formidable" offers to tickle your taste buds and plug your duodenum up with 3 burger patties, 5 slices of cheese, 6 bacon strips, lettuce, tomato, ranch sauce, served on a toasted hoagie. It's enough to make Fred Sanford clutch his chest and say. "Oh! This is the big one, Elizabeth!"

On the (very slightly) lighter side is the Postman (grilled French bread, beef patty, ranch dressing, 4 bacon strips, grilled tomato, topped with melted Swiss cheese). It's like a Sourdough Jack from Jack in the Box, only much more delish and minus the post-meal e-coli diarrhea attack.

Breakfast is served here also, and you won't find anything extravagant, but the basics are well-represented: biscuits and gravy, chicken fried steak, hash browns, breakfast burritos, and a breakfast bowl that is most likely a mish-mash of all of the above. With most every breakfast item hovering in the $2 - $4 range, it's got to be better than spending your cash on a sausage, egg, and cheese McGriddle. No, wait. Sorry, a sausage, egg, and cheese McGriddle is the universe's most perfect breakfast food ever invented in the history of time. But I'm sure the yellow truck does fine work as well.

I figured out after my one and (so far) only visit to the Big Yellow Mobile Kitchen, through the advice of friends, that I pretty much screwed up and ordered the wrong thing. The culinary specialty they are most known for, apparently, is their classic Philly Cheese Steak (grilled chopped steak, sautéed green peppers and onions and their "special cheese". At the risk of bring gross, I normally don't indulge in green peppers because, without fail, they give me wretched green pepper burps for up to several days afterwards. So, I avoided it. After hearing people rave about this Philly Cheese Steak jazz, I think I am willing to give it a whirl and just suffer through the green belchies.

What I did end up packing home with me from the Big Yellow Mobile Kitchen was the "Monster Cheese Burger" with the addition of bacon and a side of curly fries. As far as monsters go, this burger was more of a King Kong rather than a Godzilla, but a messy, angry monster it was indeed. While I will return for their storied Philly Cheese Steak, I was really only half-impressed with this particular burger. 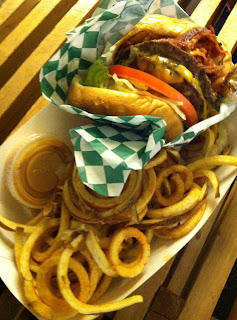 Between my buns were two comparatively thin beef patties which seemed cooked within an inch of their lives, slightly tough but with a nice rich, meaty flavor. These patties did actually taste like beefy beef, but the dry, overcooked texture was hard to overcome and I wish they were thicker, juicer, and greasier. As a very wise man once said, "Grease is the word, is the word that you heard. It's got groove it's got meaning." To put it in math terms, greasy > dry.

The tomato slice was nice and thick, the lettuce fresh and plentiful, and there was a sweet vinegary taste to the special sauce, which slightly overwhelmed the flavor of everything else. The bacon had a hickory smoked flavor, but was kind of ropey and chewy, unfortunately. The bigger deal for me was the giant, delicious mound of curly fries, which were done to perfection and included lots of crispy little burnt bits, which I adore. I think the fry sauce was the same thing as the "special sauce" on the burger, but worked much better in the context of being a fried potato condiment.

All in all, my Big Yellow Mobile Kitchen lunch was a little hit-or-miss, but not awful by any means, and for $5, it was an incredible bargain. Five measly bucks for enough food to put me in a food coma for the rest of the day. Mr. Patterson and his wife were incredibly nice and seemed like the type of folks that people would want to come back and visit again and again, and have a nice chat with while your waiting for your meal.

I will report back with an update once I tackle their Philly Cheese Steak and in the mean time, I am looking forward to their chipper text message on my phone, that will cheer me up like an old friend when I'm caught in a dark moment and I need the thought of greasy food truck grub to put some yellow sunshine in my soul.
.
(As an aside, the venerable Mr. Harry Crase (who works at Fleur de Sel) wrote this on the Get Out North Idaho facebook wall recently: "I can't believe you keep reviewing fast food and have NEVER been to Fleur De Sel for a review, in almost 5 years of business." Well, here's another fast food review for you, my dear, with apologies. I will make a promise to you that I will haunt Fleur de Sel by the end of summer, but I need to start saving up my bar tips because that place cost A LOT of cheddar to visit. I will see you soon.)

Thanks for making the honest effort to discuss this. I feel very sturdy approximately it and wish to read more. If it’s OK, as you achieve more in depth knowledge, could you thoughts including extra articles very similar to this one with more information? It would be extremely useful and helpful for me and my friends.