Bewitched. Funky disco chickens. Wizard of Oz. Cherries, bananas, peaches, and parrots. Mega deluxe super four-leaf clover diamond golden leprechaun queens. I do love the geniuses who think up all the totally deranged themes and names for slot machine screens. Truly, a visit to a rural casino is one of the most insanely surreal, detached-from-reality situations that exists within the realm of modern human existence. It's a drug-free psychedelic experience (no, I wouldn't know anything about that sort of thing), equally as enrapturing as it is bewildering.

Never any clocks in view because they want you to forget about sort of thing. What is time? It could be 3 p.m. or 3 a.m or 13 a.m. Who gives a puff what time it is? Not the bonanza of chain-smoking zombied-out old ladies, chained to their favorite slot machines by the curly plastic straps of their Coyote Rewards cards for hours, days and weeks. Why bother with such trivialities when you're up another $13.79?

The vibrating blur of the eternal human soup. The acid flashback color patterns of the carpeting. The pong of cigarette smoke and the ambient slot machine bling blong bling noises that continue uninterrupted day, night, dusk, dawn, and dream. And the Coeur d'Alene Casino on any given Saturday night can be an intense awake dream indeed, especially when there's a hardcore party girl involved.

I hadn't actually managed to trip my way down to the Cd'A Casino since their mega-expansion earlier this year, but I was invited to a surprise birthday party for an old friend last week at Hn’ya’(pqi’n’n,  the casino's new restaurant/bar hot spot. Coincidentally, my old drag name is "Hn’ya’(pqi’n’n", and the birthday bitch has been my homegirl since 6th grade, so it was an invite I just couldn't turn down.

Huge, massive or even ginormous aren't words that do the expanded casino any justice so I had to consult my trusty old friend, Thesaurus.com. I do rather like "behemothic" and "empyrean", but "super-colossal" probably describes the feeling best. The structure is ultra-modern, all steel, glass, and colored light strips and it seems to stretch on for blocks and blocks. The super-tall, retro-futuristic, color-changing totem pole structure out front is in itself enough to warrant spending an entire night tripping on psychedelic mushrooms and doing circular dancing rituals around it to summons the aliens. (I wouldn't know anything about that either, ahem.)

We weren't thrilled about having to park in the outer Bongolian region of the parking lot when we pulled in off the curvy, slightly confusing new entrance ramp, but as soon as we'd slammed the car doors behind us, a man on a 4-passenger go-cart appeared from nowhere and said "wanna ride? Hop on!"

So we did, and landed at the entrance door closest to our destination, Hn’ya’(pqi’n’n, just in the nick of time to join a table full of the birthday girl's friends and family waiting in anticipation for her to come around the corner with her boyfriend, totally unaware of the shouts of "surprise!" that were about to greet her. And surprised she was, for somehow her man had managed to keep the whole thing under wraps for two weeks, and she thought they were just coming down from their room in the casino hotel for a quiet, relaxing birthday dinner together. Oh, girl - uh-uh, no way, not quite. 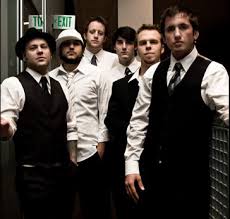 The birthday party was consuming booze beverages at an alarming pace before the band, Eclectic Approach (photo left), even did their first "check one two, check one two", so when they finally did start, the crowd went mildly berserk, especially Brandy, the birthday princess herself. I have to say, Eclectic Approach are one of the best lounge/party bands I've ever witnessed - those boys were young, good looking, energetic, talented, and good looking (yes, i said good looking twice). They started with a dance-funk song in which the singer seemed to make up lyrics off the top of his head about Brandy and her birthday, and somehow it didn't come off as corny at all. This guy's rhymes were smooth and cleverly hilarious.

A few more songs in he asked the crowd to pick a random word and they would make up another song about it. "Pickle!" I hear Brandy shriek from behind me, and the band was off, the singer freestyling a silly and slightly dirty song about the many joys of our green vinegary vegetable friends. Later, he asked the crowd for another song title and on my suggestion Brandy yelled the words "moist towelette!" and we were just tipsy enough that we were convinced we'd contributed to the creation of a brilliant (maybe not so radio-friendly) pop masterpiece. "She needs a wet towelette/To clean up all the sweat/from places where she'll never let you get".

I'd been enjoying (ahem) several tall 23 oz. cups of Kokanee beer for a mere $4.25 each, but I'd soon get a chance to dabble with the hard licks! Brandy literally grabbed me off my chair and said "C'mon! Just follow me!" I was actually following a group of about 10 members of our party on a wild adventure chase through the machine dazzle and throngs of gamblers on the main floor of the casino, through the other lounge where we had to stop briefly for a few shots of Fireball each, through the empty non-smoking game room (who ever goes there?), past the old cafe and the gift shop, through the lobby area of the old hotel, down the hall and into an awaiting elevator. Running the entire time, I was huffing and puffing out of breath and Brandy was waving hello to strangers, giving them no chance at all to be unaware of her birthday, and threatening to expose her tatas to various oogling old men. That's my girl.

Unfortunately, the elevator decided it wasn't about to heft ten rowdy drunk asses up three levels and started making an exasperated honking sound which drew the attention of two Casino security guards. Fortunately, they just laughed at our antics and rolled their eyes as we ran out of the elevator and started stumbling up the stairway instead.

We poured into one of our people's rooms (no idea whose), and crashed momentarily on the beds and comfy chairs for a couple shots each of delicious Pinnacle Whipped Cream Vodka and a random tipsy group conversation about who was the sexiest Muppet (the consensus: female=Miss Piggy, male=Elmo). Probably very sick and wrong, I know, but a good way to pass the time when you're passing the bottle around in a garishly decorated Casino hotel room.

A few folks decided to hit the machines for a bit on the way back to good ol' Hn’ya’(pqi’n’n, but I headed first for the gorgeous, new green-granite-countertopped restroom and then to the party to find some sustenance to stuff into my rapidly drunkier and drunkier system. The bar was hosting some kind of all-you-can-eat BBQ situation, but that sounded like a bit much, so I took the cue of a new friend sitting next to me at the party table and ordered the "Burger Flight", which was a sampling of three of their different signature burgers, a Mini Puburger, a Mini Kobeurger and a Mini Umami Lamburger.

With all the birthday chaos going on around me, and the constant alcohol-fueled chit-chat with various other table-sitters to distract my growling tum-tum, it seemed like my meal arrived confusingly fast. And what a site it was to see - each of the three mini-burgers had copious amounts of lettuce, tomatoes, onions, and pickles actually piled directly on top of the upper bun, all attached with a long wooden pick. This was ideal, since I don't love tomatoes and pickles on my burger, I could just toss them aside before getting down to business. Or more specifically, I gave them to a strange drunk girl who was begging me for them: "yer not gonna eat that stuff? Hot!" 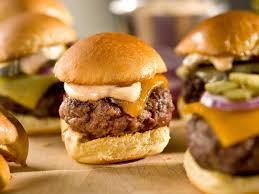 The Mini Pub Burger features "beer-butter basted ground short rib" and was rather plain (maybe I'd already had too much beer at that point to notice the nuance of the marinade) but went down well in two and a half bites. The Kobeurger's novelty situation is this: "Snake River Farms Wagyu beef topped with truffle cheese and served with butter leaf lettuce, tomato, oxtail marmalade and foie gras aioli." This item fared much better, like a creamy lightning flash of "say what?" in my mouth. A great blend of flavors and textures and I'm pretty sure I'll be ordering the maxi version of this one next time I hit the Casino.

Lamburgers are one of my favorites, and Hn’ya’(pqi’n’n's version features "domestic ground lamb grilled over rosemary and topped with sautéed shitake mushrooms, umami mayonnaise, roasted tomato ketchup and Parmigiano-Reggiano cheese." I'd also been devouring the giant pile of ranch cut fries that came with my burgers, so one bite into this amazingly rich burst of umami-ness and I was suddenly almost full enough to hit the Edge of Glory (that's an eating-too-much-food-whilst-drinking-heavily term that Lady Gaga stole from me), so I handed the rest of it over to my pickle-and-tomato girl to finish the job.

I waddled over to the game floor with a few friends and watched them play a few slots, but I'd spent all the cash I brought along for gambling on drinks and dinner, and ultimately I'm glad I did. I'm not much of a gambler anyway, and I was happy to have spent my cash on an amazing meal and an fantastically surreal experience overall. It was a birthday Brandy (or anyone else there) is unlikely to forget any time soon, and it inspired me to start making copycat plans to have my big 40th (shocking, isn't it!) birthday celebration there next spring.

The food began to make my eyelids droopy and time was making my generous buzz wear off, so I told my much more sober roommate it was time to exit the tribal Taj Mahaj of the Cd'A Casino and make our weary way back north to town. Brandy decided to walk us out, and the crazy birthday girl was significantly more blotto than either one of us. The last image we saw as we hopped on the four-seat cart back to the car was her flashing her generous bare breasts full-on at us, and the priceless look on the faces of the older couple we were riding with made the whole evening worth it times a million.