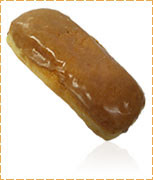 I guess it’s time I finally made a confession. Four years ago, I totally stiffed the Donut House out of eighteen cents. A friend and I were driving up Government Way in Hayden one bleary day, when fate suddenly dropped a pale yellow home in front of us and it had a simple and irresistible sign: “Donut House”. We staggered, zombielike, inside and loaded our tray with 5000 calories worth of baked goods and lattes. When I handed the cashier my debit card, she said “cash only, baby”, so we rifled through wallets, pockets and car seats until we had almost, but not quite enough coins to cover it.

“No worries,” she told me after I asked her to forget about one of the fruit-filled burritos and presented her with a huge handful of dirty nickels. “Just give us the eighteen cents next time you drop by.” I fully intended to return, not just to even up my tab, but because the doughnuts were addictively fresh and perfect. I haven’t a clue why I never did, but in recent months I’ve been replacing maple bars with carrot sticks and avoiding such places. 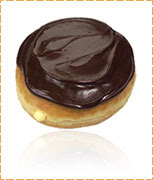 The Donut House had returned to the fat cells of my mind recently after I saw owners Matt and April Gross on the news talking about how they were giving a full day’s doughnut money to help the recovery effort in Haiti. I decided to put my vegetable tendencies on temporary hold status and see if their evil doughy treats were as remarkable as I recalled.

In the last several years, their Hayden operation moved out of the little yellow house and down the street into a more sensible spot and they’ve opened two Coeur d’Alene locations, including the Lincoln Way unit where I chose to indulge. The atmosphere of the place is stark and welcoming simultaneously, with sparse walls and a handful of tables spruced up with a warm streak of handmade Americana.

It was certainly comfortable enough for a group of chatty retirees who looked like they’d been there sipping on coffee since before the sun even had a chance to peel off its Breathe Right nasal strips. I’d imagine every rack in the doughnut case would have been stocked if I’d arrived as early as these folks, but it was mid-morning and the possibilities had been consolidated down to just a couple of trays.

Still, there was quite a variety of items left to choose from, and like kittens in a pet store window, they were all so adorable I wanted to adopt them all. But too many cats will destroy the carpet and too many glazed delights will destroy the midriff, so I narrowed it down to two. “That’s all?” the clerk queried in a tone of voice that suggested I’d be letting her down if I said yes, so I was forced to pick one more. I couldn’t bear the thought of leaving her sad. 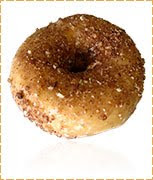 I grabbed a bottle of Sobe Orange-Carrot Juice from the mini-cooler, paid up and hovered off with my waxed paper bag of joy. I was nearly home before I realized I’d been in such a carb trance that I’d completely spaced the idea of squaring up my wee-but-nagging debt from four years earlier. They don’t need to fret too much about it. Now that they have a location within my realm of convenience, Donut House will be the first place I run next time I have a willpower meltdown and am feeling blue from eating too many greens.

These guys aren’t throwing any shade when it comes to doughnuts; they’re expertly made and supremely memorable. My bear claw was texturally delicate like a sweet cloud of dough with dustings of brown sugar candy and magic fairy dust. I didn’t realize I was in for a bonus until my third bite, when surprise apple filling came oozing out. The filling was obviously made from scratch; it was too angelic to have ever lived in some ratty tin can.

My plain doughnut with maple and chopped nuts was like a mini unbirthday cake. Moist and not overly sweet, much of the flavor came from the topcoat of maple glaze, balancing out the more subtle impact of the doughnut itself. 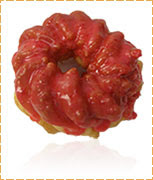 French crullers are my favorite and I’d chosen one with hot pink icing. It was a big specimen; I nearly had to unhinge my jaw like a viper to take a bite. Crullers sometimes come with a filmy oiliness that lingers on the tongue, but this one was slime free and perfectly chewy. I was amazed at how the icing tasted exactly like pink, but I couldn’t determine a specific, nameable flavor. It was fun for the mouth, like a fantasy sequence starring two classic county fair staples, cotton candy and elephant ears.

I haven't eaten a donut in a million years due to my carrot eating habit but you seriously turned my craving on! :) love your blog!

They are so awesome and mouth watering. I have to be careful other wise I would weight 400 pounds. So it is a once a week splurge, to get my donut house fix. lol