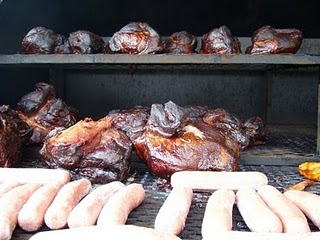 “Grilling, broiling, barbecuing - whatever you want to call it - is an art, not just a matter of building a pyre and throwing on a piece of meat as a sacrifice to the gods of the stomach.” ~ James Beard, 'Beard on Food' (1974)

It's no secret that I like meat (don't you even go there), and people have been telling me for several years that I needed to check out the smokehouse specialties of Porky G's. Formerly a hut-and-smoker style operation on Dalton Ave with somewhat tricky hours (they were closed both times in the past I tried to go), they've recently upgraded to a sit-down location on Northwest Blvd (formerly Blondie's Deli), conveniently located right across from the liquor store.

I'd driven by there quite a few times since they opened up (no, it wasn't on trips to the liquor store, thankyouverymuch - I happen to live near there) and poked fun at their crazed Porky Pig logo with the backwards cap. My stomach randomly started screaming the words "need BBQ now, you bastard!" on my lunch break the other day, so I figured that was a sign I should check the place out. I was happy to see they had a drive through because it was snowing like a Mudgy and Millie snow globe outside and honestly, sometimes I just can't be arsed to get out of the car and go in.

You can't fault Porky G's for leaving anything off of their big yellow menu board. The possibilities are rather overwhelming, actually. The basis of their operation, naturally, is meat. Meat, meat, meat and more meat. Texas Beef Brisket, Tri-Tip, Pulled Beef, Pulled Pork, BBQ Chicken Breast, half or quarter chickens; Cows, pigs, and major forms of domestic fowl might want to avoid wandering anywhere near the place, for there is a luxury suite already booked for them in Porky G's five-star Smokehouse Hotel of Death. There will be no mint on the fluffy little pillows the next morning, either.

Combo plates are available, piled with two to five meats ($10.95-17.95), or take the sandwich option and have your choice of meat served up on a fresh-baked southern hoagie roll ($5-9). Either way, you get to pick two side dishes with your meal, including baby red potato salad, coleslaw, BBQ beans, "smoked" mac-n-cheese, smoky bacon au gratin potatoes, or a house side green salad (for those who choose to be ultra boring).

I mean really, is Porky G's the sort of place where a sane person would order something as health-conscious as a green salad? Actually, their menu does list three salads that don't sound like they'll be appearing in any Susan Powter "Stop the Insanity" recipe book anytime soon: tri-tip salad, pulled pork salad and chicken salad. Homemade desserts up the butterfat ante; Cobblers and pies and apple dumpling a la mode, oh my!

Porky G's also does catering, and their menu features three mega-sized options, ranging from a Family Meal to a $75 "Pit Master", which has a line up similar to one of Oprah's quick midnight snacks: two slabs of BBQ ribs, one pound of pulled pork or pulled beef, eight chicken quarters, one pound of beef brisket, three large sides, twelve hoagie rolls, and four tubs of BBQ sauce. The only thing missing is the gallon of Jack Daniels and the tickets to the Monster truck rally. And a JETSTREAM G3™ Atherectomy System

Pulled pork has always placed high on my personal top-40 chart of thigh-widening foods, so I decided to go with that particular sandwich option with two sides (the baby red salad and the mac-n-cheese) and a tall, icy sweet tea to really kick up the Spirit of the South factor a few notches. The girl at the drive through was pleasantly chatty, despite my grumpy aura that day, and my she showed back up with my food in fast fashion. 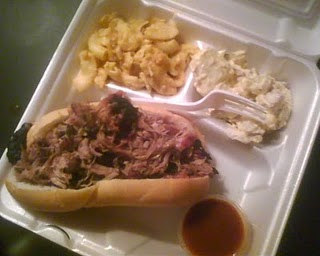 I returned home and opened my Styrofoam clamshell and my lunch was a glorious thing to behold, although right away I could tell it wasn't going to be enough food to match the all-day hunger I'd built up at that point. Still, the pork was perfectly tender and divine, and I liked the fact they chose to include a container of their sweet, tangy BBQ sauce on the side rather than on the actual sandwich so I could exercise a bit of control over the situation. The bun tasted fresh and was durable enough as to hold the whole thing together and not fall apart, a messy fate which befalls many BBQ sandwich scenarios.

My potato salad was super-duper alright, addicting actually, with big nuggets of baby reds in a dill-based, creamy dressing. The "Smoked Mac-n-Cheese" was also magnificent but it came across as more of a macaroni salad situation to me. It must be a southern thing to use giant rigatoni noodles and cook them to the point of collapse, then marry them with a mild cheese (gouda?) and some bread crumblies. It has a quite mellow flavor, but it's something that sneaks up on you and makes you want to wrap your arms around momma's leg until she gets busy making you some more.

Based on my first experience, and its location nearby my house (and next to the nearest place to buy bottle of Jagermeister), I'll most likely make Porky G's at least a semi-regular lunch stop. My only beef (sorry pun gods) was that the sandwich and portion sides seemed a little on the wee side, and I'm not even much of an overeater these days. My lunch was fully delicious, but only left me feeling about 1/4 of the way there. A half-scoop or so more of the sides would have done the trick and taken the Southern Indulgence vibe over the top, y'all!
Posted by Patrick Jacobs at 7:01 PM

The pork is very good and moist, but unfortunately the 2 times I have had the smoked chicken quarters, the skin was black and completely rubbery and the chicken itself was very dry, even the dark meat which is usually the moistest part of the bird. Will not order the poultry again.

I have eaten at Porky G's at least a dozen times and everything I have tried has been absolutely wonderful!!
I haven't had any of it to go (can't seem to wait until I get home to indulge!), but I have asked Gary what his side portion side is and was told it is 5 oz.
Now, while I can't argue with the sides in the photo, maybe he had someone new serving up the to-go sides that day. I am quite sure a quick word with Gary would rectify the situation, though.
I am quite picky about what BBQ I will eat and I have to say hands-down that Porky G's has The Best BBQ in the area. Also, you have to try the cobblers, pies and especially the magical apple dumplings!! Gotta go...getting hungry and I think I know where I am going!!

I myself always love the food at Porky G's.. I'm always have good time there.

We have eaten at Porky G's many times. each time hoping that the food is as Delicious as we know it CAN be. The thing about Porkys is its hit and miss when its going to be delicious, and when we say something about the dryness of the meats, we get the same story that they just took it off the smoker earlier in the day, and thats it,no emphaty, so after many many times of spending lots of $$$, we're out of there ..so long Porky.