It Ain't Easy to Eat Bison With One of Them Looking You Right in the Eye.

I’m not the hunting type at all. I will likely never create any kind of bang in the vicinity of an innocent bushy-tailed buck. Still, I was ultimately expecting more bang for my buck at the White Pines Café, tucked inside the northeast corner of hunting and outdoor outfitting behemoth Cabela’s. The massive hype and excitement that accompanied the late 2007 opening of the burly sporting goods supercenter has waned enough that Q. and I finally felt brave and bored enough to check it out on a recent gloomy Monday afternoon.

I’d been packing around a Cabela’s gift card in my wallet for ages after having earned it from my bank as a result of spending $2000 using my debit card. I browsed their website but couldn’t find anything that grabbed me for under $20 besides a four foot long, stuffed rainbow trout pillow. I really don’t have a need for yet another one of those, so I decided to treat Q. to a meal at Cabela’s in-house cafe. 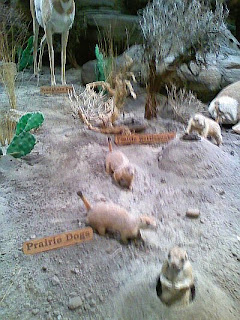 Cabela’s had us feeling slightly out of our element. By nature, Q and I are creatures that are much more comfortable in retail environments like Nordstrom, Old Navy, IKEA, even Target. Thrift stores, at least for me, are where I’m truly centered and at peace shopping-wise, elbows-deep in the bins of clothing, piles of records balanced in my arms. Ask Q. where he likes to spend lots of time and he’s guaranteed to say Abercrombie & Finch, whose spendy-trendy clothing and catalogs of fit, semi-clad young men frolicking playfully together are enough to cause the typical Cabela’s regular to drop their rods and reels deep into the river of confusion. Basically, the only times when either one of us have ever frequented this type of store over the years have been those times when camouflage is back in style.

Our tummies were growling like Canadian lynx, but as we walked in the towering doorway, we were immediately drawn to the rock mountain of taxidermy in the middle of the store. Actually, I was even more immediately drawn to the men’s room with a screamingly full bladder, but I have to say what a gorgeous men’s room it was. I found Q. blending in with a small family of Japanese tourists, smiling and pointing and snapping pictures of the dead stuffed critters garishly displayed within the artificial wilderness. Impulsively, I pulled out my camera phone and started clicking away, not sure exactly why I really needed pictures of frozen-in-time prairie dogs with startled looks on their little faces. I took some shots of Q. with his head buried in the mouths of various deadly beasts, faux panic on his face. “Come on Elmer Fudd,” I told him. “I’m so starving I could eat that stuffed wascally wabbit over there. Might be a little dry, but it should be okay with a little ketchup.” 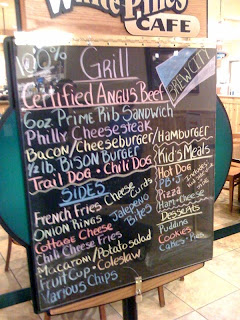 I guess when I’d heard that Cabela’s had a restaurant inside I’d thought of something a little more formal, a place with actual menus and table service. I pictured a more experimental menu full of wild game dishes with a local flair, something more impressive and unique like what they cook up for the annual NIC Wild Game Feast. The White Pines Café, as it’s called, is more reminiscent of the old K-Mart cafeteria scene. Not the ultra-cool K-Mart cafeteria era of the 70’s and 80’s when everything came covered in brown gravy and cost $1.39, but the later 90’s K-Mart Cafeteria era when it became more of a hot-dogs and fries kind of affair.

At the entryway to the dining room are two hand-scrawled neon dry-erase boards which serve as the menu. The first words that popped out at me were “ostrich”, “wild boar”, and “elk”, all listed as deli sandwich options of all things. Aw, mom; not sliced ostrich and provolone on rye again! Also available on the semi-exotic side are the venison and bison brats and the Safari Salad, which I’d imagine is topped with a chopped mish-mash of all these unusual meats.

Otherwise, the White Pines serves up a standard diner mix of burgers, chili dogs, and pizza by the slice. Fryer foods are of the essence here, with everything from onion rings and jalapeno poppers to beer-battered cheese curds swimming upstream in baskets of hot oil. The two soups of the day were “Whitey’s Beef” and “Whitey’s Chicken”, perhaps not the most politically correct soup names ever, but “somehow perfect for this place” as Q. not-so-tactfully put it.

I decided to walk just slightly on the wild side and chose the ½ pound Bison Burger and a small order of the cheese curds. Q. sneered at the idea of anything but cow and ordered a regular old Bacon Cheeseburger. T 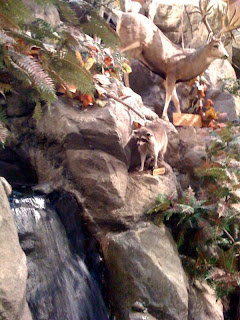 he flow of traffic is set up so that you have to have your finished, cooked meal with you before you can even cross through the pay station and sit down. In other words, they require you to stand around idly for ten or more minutes at the counter while you watch them slowly grill your burger. This isn’t the most customer-friendly way to do things. People began pouring in the small ordering area behind us, crowding in on us uncomfortably while we waited for what seemed like an eternity for our burgers to finalize. When they finally did, they were just hoisted over the counter at us with a grunt and a snarl.

My Bison burger was fine; rich, meaty, and flavorful, but with a dissolving bun that led me to give up about halfway through and just eat the patty itself. I’ve had a few bison burgers in my day and this wasn’t really anything to blow my duck call about, passable but ultimately boring on a plain plastic throwaway plate with three weak onion slices and a wither of leaf lettuce. On the other hand, Q. had high praise for his Bacon Cheeseburger, saying it was “perfectly done” and we both did enjoy the golden-brown beer-battered cheese curd nuggets.

I suppose my high expectations were unrealistic, but it wouldn’t take much for Cabela’s to bring their “White Pines” up a few notches on the classiness scale and make it as much of a novel destination spot as the store itself.
Posted by OrangeTV at 12:01 AM

Question: Do you regularly/seldom/never visit Cabela’s?
Six comments on this post so far. Add yours!

I went, I saw, I was unimpressed. I won't be going back.

Never been in one and probably never will.

I don't kill for sport. Seems to be what Cabela's is all about.

I got no reason to go there.

We popped in a bit after they first opened. Nice to say we've been there, but since we can find pretty much everything we'd be interested in locally for a better price, won't go again unless we are taking some of our out of town friends who want to check it out if we take them up to CDA for sightseeing.

I went.
I saw.
I got a mug and a bouncing monkey. My husband spent way too much time eyeing the cammo teddies. I said, “If you buy it, you're wearing it.”
Haven't been back.

We go to Cabela's for the “Braided Pretzels” for me and my wife likes the earrings. The pretzels are good and there is more than outdoor stuff.