“Alright, you’ve got me completely hooked,” I announced, feeling like a twisted Easter Bunny with a huge purple candy basket in one hand and a huge green one in the other. “It’s been a lot of fun, but I’ve got to go back to America now.” With a few short steps, I made my exit over the strip mall threshold of Hermine’s Old World Confections into the parking lot and suddenly, I was back in the USA. Before my visit, I had no idea it was possible to travel to Germany directly from Coeur d’Alene without a passport or a ticket for a long, expensive overseas flight. Forget the complimentary sack of airplane peanuts because Hermine has much better treats on offer and plenty of good conversation that will keep you entertained way more than any flop in-flight movie.

“Welcome to my world,” is her trademark greeting and it’s true, Hermine Sittel Kubista has created an entire miniature universe based on her childhood in the tiny German village of St. Alban where she grew up. A dizzyingly gigantic, floor-to-ceiling mural of the famous Bavarian castle Neuschwanstein hangs on one wall. Old country bric-a-brac is displayed tastefully in every corner of the tiny shop. A colorful hand painted gingerbread-style playhouse in which 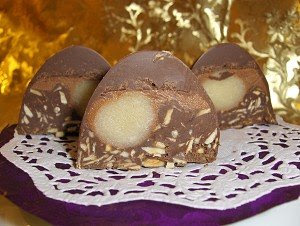 her daughter once frolicked now serves as a clever television stand. Even the TV was showing some kind of intensely odd German show about pewter figurines; I really thought I had every channel offered by Time-Warner, but apparently not.

Most eye-catching of all are the variety of colorful goodies displayed on all her shelves and in brightly-lit glass cases. Hermine’s shop wasn’t always so festive and full of foil-wrapped temptations. In fact, it was only about two years ago that she was able to realize her longtime dream by installing a fully functional, stainless steel kitchen in the back of her alterations shop, then called the Clothes Clinic. Since 1988, when she made her first batch of Lebkuchen, she’d been using the kitchen at the St. Pius Church and making her bonbons as a side gig to sell primarily to folks whose main business was having her hem some pants or replace a zipper. Gradually, through word of mouth and on the strength and uniqueness of her products, just as many people started showing up for the candies. Now, although she does still have a small but devoted customer base for her tailoring services, her shop has been fully transformed into a German candy paradise.

“I just missed the stuff so much, and I just couldn’t find anything like it” Sittel-Kubista explained on the day I visited. So, she decided the only way she was going to be able to satisfy the unstoppable urges for the treats she had as a girl was to start making them herself. It all started with the Lebkuchen (“cake of life”), a thick, soft cookie made with honey and five spices. It was an instant hit, but as we all know that anything is better when dipped in chocolate.

So that’s exactly what she did, drenc 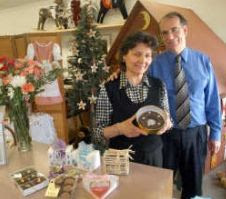 hing some bite size pieces in dark chocolate and then topping them off with a roasted almond. She sent a bag of these treats to the Agricultural Department for safety clearance and received a personal note back from the inspector; “I ate the whole sack with a cup of coffee and enjoyed every bite. Approved.”

Next, she started making the product that would eventually be her trademark item, her masterpiece, her “Starry Night” or “Mona Lisa.” Marzipan is a rich confection made of natural sugar and almond paste, and often covered in chocolate or used to create miniature fruit and other objects for cake decorating. The majority of what is passed off as marzipan in this country tends to be flavorless and pasty, but Hermine’s marzipan is absolutely heavenly with a melt-in-your-mouth soft texture and a delicately sweet almond flavor. She jokes that with her German accent, people sometimes misunderstand her. “What’s Marzipan? Is that Jewish?” they ask, perhaps thinking it’s related somehow to matzo balls. Her marzipan may not be exactly kosher, but it is authentic, made using an almond paste that she orders from a Brooklyn, NY company who’ve been shipping it in paint cans since 1924.

“It really takes something different to get peoples attention,” Hermine explained, and her treats certainly do fall into a category much higher than anything you’re likely to find on the grocery store shelf or anywhere else for that matter. For example, she makes little foil-wrapped red and green marzipan apples and “Idaho Potatoes”, which are miniature marzipan spud replicas dusted in cocoa powder and sold in a mini-crate of six. She sells her creamy hazelnut chocolate in bars, and her “Coeur d’Alene Nuggets” marry dark chocolate and crunchy almond bark. Her latest invention, the “2005 Truffle” combines Belgian nougat, hazelnut and marzipan, and is also dipped in a bath of chocolate. It’s hard 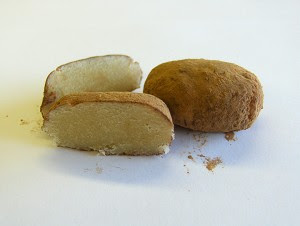 to imagine such a thing becoming even more fabulous, but upon request, she’ll sprinkle your truffle with edible 24k gold dust. For those watching with a sugar problem, she does offer alternatives, and says that with her all-natural ingredients, her confections are “better for you” than other preservative-filled candies.

Naturally, with Easter right around the corner, she’s fully stocked with a variety of hazelnut chocolate and marzipan eggs. While she was putting together an Easter basket for my mom, she insisted I try a couple of the marzipan eggs, but instead I asked her for some duct tape so I could save the effort of chewing and just tape them directly to my bottom. Okay, of course I ate them and just like an especially pure narcotic, I was instantly addicted.

Hermine summed up her philosophy to me like this: “You sit down and you enjoy life and take your time and smell the roses and relax a little bit and have something really good to eat on the palate, it’s worth it.” No need to pack your luggage and arrange for the neighbor to feed the cats. Just drop by Hermine’s Old World Confections and indulge in a super sweet German holiday without even leaving North Idaho.