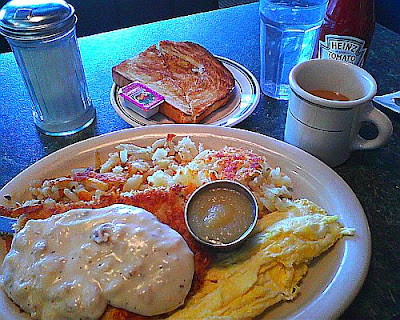 I guess they could have decided to name it "Some Random Space" or "Building on a Road" or something even more inconclusive. In a way, the name "Side Street Place" is refreshingly unpretentious, but at least for me it's a little on the hard-to-remember side. In fact, when I sat down to rattle off this review a couple of  days after stopping in for lunch, I had to dig in my wallet to find the receipt so I could look up the name before I started typing out my thoughts.

To the credit of the sociable waitstaff and the mighty kitchen wizards at Side Street Place, the name is fortunately the only thing unremarkable about this new entry into the Post Falls diner scene. Housed in the shell of a former Wingers fail, new owner Betty Romps has kept the menu nearly identical as that of as the restaurant's most recent former incarnation, The Breakfast Nook. Nothing wrong with that, really - why get artsy fartsy and mess around with a line up of breakfast and lunch items that's perfectly classic and complete already? And there was no reason to take out the original Wingers interior decor situation of dark green and off-white checkered tile, a fifties style open kitchen and bar-stool lunch counter, and an eye-dazzling ceiling of faux-retro shiny silver hammered pattern squares. It still works.

If you've been to the Breakfast Nook, you already get it - variety of omelets, pancakes, waffles, biscuits and gravy, minced ham scram, Cobb salad, a smattering of burgers, chicken fried steak, tuna melt, French dip, and so forth, and so on. Side Street Place even keeps the Nook's oddball attractions, like the calamari burger and the breaded razor clams with eggs, potatoes and toast. (Clams for breakfast? Really? Why not, I guess.)

I'll admit, although my last few visits there haven't necessarily been anything to cackle and caw about, I do love me some Breakfast Nook action, at least in its Coeur d'Alene Fourth Street incarnation (I never did have a chance to check them out in Post Falls), but I'm going to just be blunt and throw this right on out there - the meal I was served at Side Street Place kicked the Breakfast Nook's roostery little bum.

A friend and I were talking just the other day about how dining out solo can sometimes seem a little awkward. You always wonder in the back of your mind if the hostess is thinking, "oh, this poor lonely chump must have some kind of hot, fresh B.O. or perhaps an anti-social personality disorder and can't even find another soul willing to share the same table space".

We decided it was worth it. Once you get over the initial party-of-one weirdness, it can be a quite enjoyable thing to sit down, relax, maybe read the newspaper, and just take in a dining experience without the distraction of friends and family yammering directly at your face while you're trying to eat.

I'm quite used to chowing solo anyways, and actually, the hostess at the Side Street Place didn't make me feel like it was such a big deal - the place was quite busy with a Sunday lunch rush with an after-church vibe (large groups), but she still sat me at a huge window booth with a gorgeous view of Interstate 90 and the freshly snow coated mounted behind it. All to myself, where I could just sit and eavesdrop in peace.

My waitress offered me a cup of coffee and naturally I said yes! I was fueling up for a day of Post Falls thrift shopping and I needed my caffeine to get the job done. And a damn good cup of coffee it was. After a few moments of vague indecision, my girl returned a few minutes later and I ordered the Breaded Pork Cutlet with eggs, hash brown and toast. I think it was the power of suggestion about the inclusion of applesauce that made me choose it over the Denver Omelet (what I usually order off ye olde Breakfast Nook menu.) The phrase just kept echoing in my brain in a a funny Bogart-ish accent: "porkchopsh and appleshaush, porkchopsh and appleshaush". Blame it on the Brady Bunch, I guess.

I did have a Sunday newspaper handy while I awaited for my meal to arrive, but I didn't actually get into it at all. I was too interested in letting my mind go adrift into the conversations of the other folks around me. A father was patiently doing basic math problems with his elementary school aged daughter. The glitzy looking older couple next to me were wearily planning yet another trip cross country in their RV, how blah, like they'd seen it all before.

A group of ladies working a Menonite Chic sort of look were excitedly discussing their impending Big Lots shopping trip. Some old graying hippie held up my waitresses for what seemed like an eternity between coffee refills, going on about how he used to play in the Jimi Hendrix Band way back before Jimi Hendrix was Jimi Hendrix.

I was fully enjoying getting caught up in the business of total strangers, but the spell was completely broken when my waitress dropped a plate of food in front of me that made me declare "good gravy!" My pork cutlet platter was amazing to the eyes, soothing to the brain, tasty on the tongue, and totally tubular in the tummy.

A tender pork slice delivered in a golden crust of breading and with a ladle of country gravy plopped on top., a delicately folded, bright yellow rectangle of scrambled eggs, a giant hill of superbly crispy hash brown action - the most amazingly perfect specimen of crispy shredded hash browns I've come across since the grunge era, in fact. A side plate of buttery sourdough toast (with a jelly bonus), and that all-important ramekin of applesauce.

It was delish, and I was so hungry and enamored with my meal that I can't believe I ate the whole mothertrucking thing! Except for the applesauce. I was saving it for last, and honestly, I got way too full after my last forkful of hash browns that I just couldn't fit any more in me. So sorry, Peter Brady, I couldn't do it. Anyway, the purpose of the applesauce seemed more decorative more than anything else, two tablespoons of the stuff just doesn't balance with the mondo pork-egg-potato-toast quotient.

Side Street Place, even with its mentally slippery name and its lingering Breakfast Nookiness, was quite a few notches above what I was actually expecting, offering an inviting, neighborly place to eavesdrop solo or dine en masse and make plates of golden grub disappear forever in bliss.


With a green and white tile and panel contemporary decor, the place (originally a Wingers restaurant) seats about 100 guests in booths and at tables and a bar. New owner Betty Romps renamed the eatery to separate it from the Breakfast Nook in Coeur d'Alene. She has previous restaurant experience in Newbury, Calif., where she moved from with husband Howard who discovered North Idaho while stationed at the former Farragut Naval Base on Lake Pend Oreille.
Posted by Patrick Jacobs at 11:24 AM

I think, now, I have to go there! To see for myself!

I just ate here for the first time today .. actually looking for the Breakfast Nook .. and I have to admit, the sign in from IS lackluster and well .. sorta not too prominent if you expect to see the BN sign.

I appreciate the fact that they have breakfast and lunch selections for petite eaters .. that are perfect in size. 2nd cup of coffee was better than the first.

We are regulars at the Side Street, formerly Breakfast Nook. We love the food, the value and Our regular server, Janice. We've never, ever been dissatisfied. It's nice to have a breakfast place so close to home. And the prices are great. We always leave full. One day ,I accidentally ordered the omlet with chili, adn it was phenomenal. I usually order the number 1, which is never bad.

Betty is a psycho path. Dont go back.

Food is good, but they seem to go thru staff quite ALOT !!!!!! just when you get to know one and keep coming back, they get rid of them. day cooks are quick to cook food and get out write away,
night cook talks way too much and seems mean to waitres

I agree that Betty Romps is mentally unbalanced!!
She is THE meanest, most miserable human being I have ever encountered!! It's no wonder her staff is a bunch of short-timers!

I agree that Betty Romps is mentally unbalanced!!
She is THE meanest, most miserable human being I have ever encountered!! It's no wonder her staff is a bunch of short-timers!