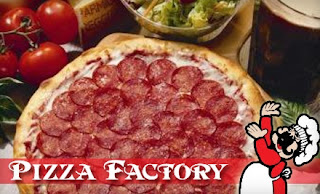 My chubby little typing fingers haven't been bloated in this sort of special way in quite a while. They've so missed the satisfied but uncomfortably full feeling that comes after an hour or so spent at an all-you-can-eat pizza lunch buffet.

Back in the day, the endless pizza slices and salad bar at Godfather's Pizza on 4th and Appleway in Coeur d'Alene was the backdrop for many face-stuffing events. We'd arrive just in time to watch the Sally Jesse Raphael Show on the overhead TVs, and get caught up in all the out-of-control-teens or drag queen antics. Sally and her goofy red glasses haven't graced our screens since around 2002, and the Coeur d'Alene Godfather's disappeared for good not much longer after that, so that serves to describe how long it's been since I've experienced some pizza buffet love.

And really, it was there the whole time. I knew somewhere in the dark corners of my brain that the Pizza Factory (formerly known many moons ago as the Pizza Shoppe), tucked away back on the north end of the strip mall/shopping center at Appleway and 95, served up an all-you-can-eat lunch spread, but it didn't actually occur to me until earlier today to pop in and check it out.

I must not be the only one who for whatever reason forgot all about their buffet situation. When a friend and I arrived at what should have been the height of lunch rush, the place was completely deserted, save for one lone office-y type lady, casually grazing away her lunch break and staring out the window at the wig store across the way. I thought "Ah, well - more pizza for us, I guess!"

But after paying the dementedly bored looking cashier girl and getting our drinks, we noticed that there was only one trusty little tray of pizza occupying the hot table, lazily warming itself under the heat lamp. But it appeared fresh, and the one pizza was made up of three different varieties - Hawaiian, classic pepperoni, and some kind of intense looking meat combo. I piled a slice of each on my beige plastic plate and delivered it to a large table next to the video game area.

I wasn't quite ready to settle in yet - a visit to a pizza lunch buffet wouldn't be complete without a trip through the salad bar. Kudos to Pizza Factory for stocking such a complete, fresh, and lovey salad bar despite the apparent lack of public interest. When I go for a salad bar, this is what ends up on my plate - lettuce (of course), slices of purple pickled beets, black olives, a ton of sliced boiled eggs, sunflower seeds, a pile of croutons and several large scoops of thousand island dressing. That's pretty much it - carrots, broccoli, tomatoes, and cucumbers can bite me. I always try my best to turn something potentially healthy into a carb and fat laden mess, and I definitely accomplished that mission.

The video arcade area of Pizza Factory isn't particularly enormous or impressive, but I was drawn to sit in that particular section of the place perhaps because I spent a large portion of my youth in the 1980's hanging out in environments where there was a solid wall of boopy bleepy noise coming from rows of electronic video games machines. It's a sound that's still comforting to me to me to this day, and eating hot pizza slices in that environment always transports part of me back to my teenage years.

I dug into my soupy salad first, and it was exactly as good as expected, and I mean that in the best way possible. Thousand island dressing is so viscous and sweet, it turns pretty much everything it touches into a sort of dessert. The sweetness of the pickled beets sealed the deal, and the boiled eggs lent a breakfasty feeling to the affair. Heck, it was like having all six daily meals at once (there are six meals, right?). For whatever reason, salad bars are rather rare these days and they are missed, at least by me.

The pizza at Pizza Factory is great! In my opinion, they are one of the most underrated franchise/chain pizza places in the country (120 locations in five states). I can't stand the sweet crust of Dominos Pizza, and their chintziness with toppings. I like Pizza Hut, but the sauce and general greasiness inevitably gives me death heartburn that lasts into the wee hours of the middle of the night. Little Caesars pizza is weak in too many ways for me to get into. But Pizza Factory does it just right. The crust is just the right thickness and baked to a crisp delicious golden brown. The sauce is bright and tasty and doesn't overwhelm the flavor of the plentiful cheese and toppings.

I think Pizza Factory survives on being a gathering place for larger groups of people, like kids softball teams and family reunions (we had one there a few years back and they gave us our own room and treated us royally). I've heard from a few in-the-know folks over the years that their sub sandwiches are gigantic and exceptional, and that their spaghetti and pasta dishes are excellent as well. Clearly, the place must get people-y at times - including the Pizza Shoppe era, they're one of the longest surviving pizza joints in town.

Chowing down on my truly fantastic mega-loaded slice of all meat pizza (pepperoni, Italian sausage, ham, ground beef, crispy bacon), I looked around the empty restaurant and wondered why the heck more people weren't taking advantage of such a great deal - $7.99 for all-you-can-eat salad bar, excellent pizza, and a bottomless soda. Maybe it was just a way off day, but the demeanor of the counter girl and the owner/manager guy that eventually emerged from the back indicated that they were used to the place being not-exactly-hopping during lunchtime.

I guess until the secret gets out (here it is, folks!), we will have the place to ourselves and as much thousand island dressing and mega-meat pizza as our hungry hearts desire.
Posted by Patrick Jacobs at 2:42 PM

Good information on this post. Also, it is really nice to listen all your words. Thanks for sharing this.
Pizza Equipment