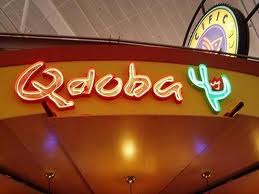 Like a hot, greasy burger patty sliding off a stainless steel spatula onto an awaiting bun, some eateries just don’t stick with me. Sometimes I’ll drive around wondering where to eat and certain restaurants don’t even pop out and beckon my attention at all. Eventually, I might notice them and think “of course, it was there the whole time”, but even after I finally make a visit or two, I’m still left with a blank, with nothing especially memorable to report, but no real complaints either.

So it was with Qdoba Mexican Grill, a place located less than a mile from my home which I’d driven past dozens, if not hundreds of times over the years but had never bothered to investigate until recently. A friend had spent some time telling me that their world basically revolved around Qdoba, about how it was their absolute favorite Mexican place in town, and that they were shocked and ashamed that I’d never experienced the enchantment of their giant burritos myself. Others in the room agreed, I was a Qdoba creep for ignoring the situation for so long.

With such a major, peer-pressure-induced guilt trip on my shoulders, there was no way I could just obliviously drive by Qdoba now without checking it out, something I decided to do for lunch several days later. They’re a chain outfit and their basic setup is reminiscent of Subway, with an overhead menu, tortillas instead of bread, and employees standing behind a buffet of toppings who glare at you while you try to quickly absorb the menu and decide on your order fast enough to avoid the capital crime of holding up the line behind you.

Panicking slightly, the word “molé’ leapt out at me. It’s my favorite Mexican sauce (naturally, since it’s usually made with chocolate) so I asked the awaiting teenager behind the clear plastic partition for an “Ancho Chile BBQ Burrito”, which includes their “slightly sweet, mole-inspired barbecue sauce with spicy chiles, hickory, and smoky mesquite”.

I was asked if I wanted my burrito naked (no tortilla), but I’m a bit of a prude when it comes to nudity, so I declined. Going down the line, my steamed tortilla was piled high with rice, then I was offered my choice of meat (pulled pork or grilled chicken), beans (pinto or black), salsa (five varieties), and cheese or no cheese.

My burrito was indeed large, but the bulk of it was rice, which didn’t pack a lot of flavor in itself. The sauce leaned heavily on the sweet side of barbecue, and the molé flavor was minimal at best, but combined with their Salsa Roja it was tangy enough to help turn the tender pork, black beans, sour cream, and rice into a generally successful team. I did enjoy the soft and chewy texture of the steamed tortilla, which somehow brought to my mind the descriptive term “squeaky”, which probably won’t make a lot of sense until you try one.

My squeaky burrito was fine, but the visit really hadn’t left much of an impression on my brain, so I decided to return to Qdoba during dinnertime the next day. The atmosphere behind the counter was considerably more chaotic than on my first visit. The grills were pulled out from the wall and several employees were wiping the inside of the massive hood vents. From the looks of the black dirt smudges on their cleaning rags, they were doing a fine job of it, but I found it an odd and somewhat unappetizing task for them to be accomplishing during the dinner rush.

Regardless, I ordered a Grilled Chicken Quesadilla and a cup of Tortilla Soup as part of their “Craft 2” special which lets you select two smaller-portioned items for $5.99. The quesadilla was rather plain, with semi-melted cheese and barely warm chicken chunks of suspicious origin, but it was saved from doom by the addition of their nice, fresh pico de gallo.

On the other hand, Qdoba’s Tortilla soup was quite a treat. It’s a thick, rich stew of spices and chiles topped with sour cream and shredded cheese that melts immediately, creating a glob of unwieldy but delicious goo, and tortilla strips. Ultimately, it was possibly the only thing about Qdoba that would really make me want to haunt the place on a regular basis.

My friends weren’t happy when I reported back to them that my ultimate indifference about Qdoba remained, telling me that I had no taste and I just didn’t know what I was talking about, and perhaps they’re right. I mean, it’s not like I have experience formulating opinions about food or anything...
Posted by Patrick Jacobs at 8:49 AM

dude! Q doba's my favorite and that Q doba is the best anywhere!

Another joke. Does the word Mexican have any draw for the customers here cause this place is 100% NON MEXICAN.
Enjoy your taco salad.

@BN196: Yes, it's a fast food place. One could argue it's "non Mexican" or maybe just Mexican inspired. Regardless, why not..oh I don't know, try the food and see if you like it based on it's own merits. AGAIN you seem set on bashing every restaurant, and for the most part based on your preconceived concept of "authentic". I ask again, do you even enjoy eating?

Good article and a nice summation of the problem. My only problem with the analysis is given that much of the population joined the chorus of deregulatory mythology, given vested interest is inclined toward perpetuation of the current system and given a lack of a popular cheerleader for your arguments, I'm not seeing much in the way of change.