Get Out Goes West: Sushi.Com 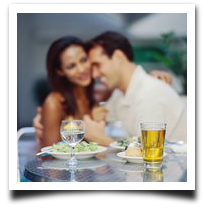 Here's a link to the URL http://sushi.com.  Go ahead, open it up. I'll wait right here. How many bottles of "Amazon Thunder Detoxifier" did you purchase? Did you enjoy the fugly stock art and the non-clicky links? Did you want to reach into the screen and grab that frosty pint of beer sitting on the table in front of those smiling, blurry lovers embracing awkwardly over a plate of salad?

I discovered the site in an attempt to use the net browser on my phone to Google up the menu of Sushi.Com restaurant after a pal offered to treat me to a sushi fix during a Spokane thrift store adventure. I'd visited once before a few years back and had enjoyed it, but Bryan wasn't going to be convinced until he knew for sure that they had his precious sea urchin ready to serve. Other than creating a distraction from our mission ("Hm, let's just hit Dempsey's for a frosty pint instead"), the website was clearly useless.

In an age when every espresso shack and burrito truck has at least a Facebook page, it's obviously rather ironic that a place named Sushi.com wouldn't have their menu posted somewhere online. If it exists somewhere, I'm unable to locate it. Still, it was the highest rated Spokane sushi spot on Yelp! (quoth one reviewer: "sushi.net would be more clever, but I have no complaints about this place"), and since Bryan wasn't really paying attention to my phone meanderings, I lied and told him about all the rapturous mentions I was reading about their wonderful sea urchin.

Thankfully, it was there, listed on their old-fashioned ink-and-paper menu, along with literally dozens of unusual specialty rolls (the "Harley Davidson Roll", the "Montana Roll" made with creamcheese), a long list of Nigiri options, appetizers, and weeks worth of entrees. Bryan is a raging sushi fanatic even more so than me, and admittedly a large eater who is normally on a non-existent budget. He'd been deprived of sushi for far too long, and had a ridiculously large bundle of cash burning a hole in his pants pocket after having his ship come in, so to speak. I'm wearing my serious face when I say that he was quite prepared to go to town on some damn sushi.

Not wanting to go overboard on his dime, I chose a few modest rolls and a cup of miso soup, but he decided that rather than hassle with committing everything he was craving to memory, he would just choose spontaneously when the waiter came to take our order. To his credit, our server was exceedingly patient. Bryan's intense and lengthy initial question and answer session, he feverishly scribbled the items on our guest check.

Our waiter nodded politely without comment and scooted off to the kitchen as I sat there trying to figure out how to put my jaw back together. "Are you REALLY going to eat all that, because I couldn't probably even put away 1/4 of that insane amount of madness?", I asked, bewildered. "We'll have a snack later if we don't, but I have a feeling there won't be leftovers" he assured, with a smile like Satan's finger-famished piranha.

The atmosphere inside Sushi.com is elegant but hushed, moder and classy, with a super nice Anime-esque staff and some light pop floating around in the background. While we waited for our lorry of sushi to arrive, Bryan tried to convince me to try one of his pieces of sea urchin, and idea that I wasn't tremendously excited about. When it comes to sushi, I know what I like and I don't generally veer out of my comfort zone. "It tastes like a delicious moldy attic", he told me excitedly. Granted, it's been quite a few years since I licked a moldy attic, but I can't say his description was appetizing in the slightest.

If I recall correctly, it took our server four trips to bring everything. I decided to get the sea urchin experiment out of the way first. Take a large marshmallow and soak it for weeks in a marinade of sock sweat, aquarium water, and green olive juice. Then, let it sit out on the courtesy counter of a back alley whorehouse for 324 nights so it gets nice and rubbery. Inject it with a syringe of the mucous from Larry King's soft membrane. Serve chilled. "Mmm, what fantastic sea urchin. Perfect", amazed Bryan as I reached for my sake cup to chase the whole nasty mess down in one labored gulp. Needless to say, an acquired taste and not one that I will ever actually acquire.

Happily, everything else I tried was supremely tasty. The California roll and Spicy Tuna roll were right up my alley, fresh and vibrant. I actually love octopus if done right, and their was, with mild flavor that's set off fantastically with lots of wasabi and soy, and not at all chewy in texture like the Tako I've had at some places. The Ebi was similarly fine, but it's difficult to flounce too bad with just plain shrimp. The highlight of the entire meal for me was the Volcano roll, which included tempura coated soft-shell crab and scallop, and with the roll itself battered and fried and then hidden on a platter underneath a mountain of tempura crumbles decoratively covered in a tangy brown sauce. Deep fried times three equals heaven, naturally.

I can't report on the surf clam, the mackerel, the salmon skin roll, and especially not the flying fish roe with raw quail egg (yuck!) because I was either too squeamish or too full to even try a bite. We'll have to believe Bryan when he says that everything was spectacular, which he assured me as he was paying a tab that was shockingly close to several days worth of wages, for me at least. I am still amazed that he waddled out into the Spokane evening without a single Styrofoam to-go container in his hand. He kept his word and managed to finish every last bite. Not one to gloat, his final comment on the subject was "hey, do you have any Tums in the car?"
Posted by Patrick Jacobs at 9:20 PM

Email ThisBlogThis!Share to TwitterShare to FacebookShare to Pinterest
Labels: Get Out Goes West, Sushi

Been meaning to visit Sushi.com for years - hopefully soon. Thanks for the great review!