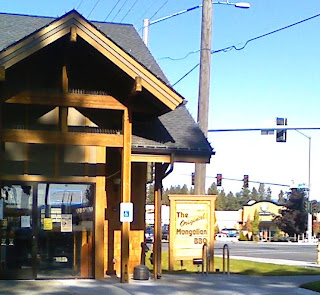 The concept of the Mongolian BBQ is a bit of a fuzzy sham, albeit a delicious one. Turns out the basic idea actually originated in Taiwan within the last 30 or so years, and is far closer to Japanese-style “teppanyaki” cooking than the dried camel jerky and yak dumplings popular among the nomads of Mongolia.

The back story perpetuated by many of these types of eateries is that the soldiers of the ancient Mongol Empire went hunting for meat, overturned their massive shields above a bonfire and cooked dinner in them using their mighty swords to stir-fry whatever they could kill that day, presumably along with whatever vegetables happened to miraculously be in season during the continuous freezing cold weather. I do like the story, but in reality it’s not much more than a clever marketing device.

By no stretch of the imagination would anyone confuse the cooks at Coeur d’Alene’s “Original” Mongolian BBQ with the ancient soldiers of Mongolia, but what they do does require quite a bit of old-fashioned skill. It’s always fairly entertaining to watch them circulate around the cooking table, pushing the food to and fro and creating dramatic, sizzling storms of steam with squirts of water meant to keep things from sticking to the grill and becoming overcooked.

There have been a few times when I’ve seen these guys do some fantastic tricks with my future dinner, including cooking behind their backs and using their long stick-like utensils to swoop the finished meal up into the air and then catch the whole thing with one of the serving bowls without dropping so much as a broccoli crown on the floor. 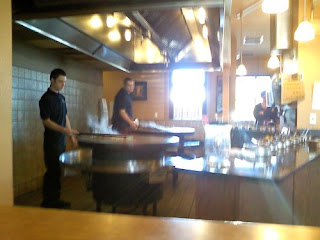 It must take a lot of practice and a certain amount of talent to be able to fling unwieldy mounds of noodles, meat and veggies around with such effortless precision. I’m certain I’d have the fire department there in ten minutes after my attempts at culinary flamboyance resulted in flash fires and first-degree burns on my hands and face.

On my recent lunch stop into the restaurant, the men working the sizable round grills were comparatively mellow in their performance. It was a lazy Sunday early-afternoon and the crowd was nowhere near as hectic as I usually encounter. Scanning the other diners, I concluded that this must be where the attractive churchgoing hipster crowd of Coeur d’Alene decides to meet for their post-sermon lunches.

For those who aren’t familiar with the setup, you choose between three bowl sizes, big, bigger and biggest, then travel down a long buffet, filling your bowl with your own personalized selection of raw ingredients. The beef, pork, and chicken are sliced micro thin and kept frozen for more even cooking. When you reach the end of the line, you pour ladles full of different cooking sauces and oils atop your heaping mound and then the cook does his swift magic right in front you while you wait.

Usually I like to load up on the noodles but I decided to avoid them entirely as a precaution against wrecking my diet, leaving more room in my bowl for nutrient-rich veggies. As I went down the line, I selected broccoli, carrots, celery, red onions, pineapple chunks, mushrooms, baby corn, water chestnuts, bamboo shoots and, somewhat regrettably, a handful of very ripe jalapenos. I piled iced chicken shreds on top and poured on countless scoops of the Mongolian sauce, the Thai peanut sauce, the garlic sauce, finishing with a generous amount of the red hot oil. 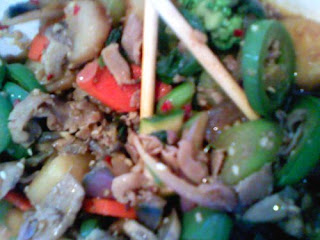 What I ended up with was a hot mess, in the most appetizing way possible. I located the table where the hostess had dropped off my lemonade, unwrapped my chopsticks and let the steam and mouthwatering aroma waft into my face for a moment before digging in. Bam! I had bought myself a one way ticket on the express train to Extra Spicy Land. I’m usually able to tolerate the most wickedly peppery of foods, but apparently my sinuses didn’t get the memo that day. The combination of the plentiful jalapeno slices and the scoops of hot oil had teamed up to wreak havoc on my senses.

The hostess dropped by to ask how everything was and I grimaced and choked “just great, thanks” as tears poured down my face like I had just learned that “Ugly Betty” was cancelled. Mercifully, they do supply heat-absorbing sides of plain white rice for fools like me who end up in such a piquant situation.

Once I picked out the jalapenos, I was able to enjoy the flavors of the sauces and other ingredients and as I ate, the meal became increasingly palatable and satisfying. The fortune cookie the hostess brought with my bill was a nice final touch, and as I paid for my meal, I thanked them graciously for the kind service and the mind-bending, life-altering endorphin rush.
Posted by Patrick Jacobs at 12:01 AM

Hi Patrick,
First of all, thank you for the witty and very positive review of the "Original" Mongolian BBQ in Coeur d' Alene. The Jensen family has owned and operated the restaurant here since 1997. Three sisters - Alisa, Angella, and Amanda along with their dad, Dave, manage the facility, and a granddaughter, Meghan, has also worked there for 3 years (summers & weekends) prior to graduating from Lake City HS and heading to the UI this fall. A few more are in the wings, awaiting coming of age!

Other Jensen family members had opened Mongolian BBQ restaurants in the Boise area in 1993, the first of such restaurants in the state of Idaho. They are in partnership with the owners here. The "Original" term was added when other similar restaurants located in the area.

I like the Mongolian nomad story, too, but it does sound rather unlikely, and fortunately the ingredients served at the local BBQ are fresher, healthier, and undoubtedly more sanitary, too. Again, thank you for a creative review of our restaurant, its nice to see support for a locally owned and operated business.

We feel as though this restaurant has slipped greatly from what it once was. The re-stocking of empty bins is very slow and food is often slopped all over the place with the staff not seeming to care about cleaning it up. A design flaw in the new place is how "deep" or far back the oils in the rear rows are placed. You have to be about 5' 8" or better to reach back that far. Shorter people and kids can not get to those oils. (I know - short wife and a 10 yr old)

Our #1 choice for Mongolian is in the Spokane Valley. The Hu Hot (or something like that..) Immaculate, VERY ATTENTIVE staff, delicious and oils with full and robust flavors.

Jensen family - attention to details. Look at things from your customer's perspective and you'll get back on track.

I have to agree that I prefer Hu Hot in Spokane Valley. I get the distinct feeling from the "Original" Mongolian BBQ that somebody is observing my selection and will penalize me for taking too much meat. Making the meat the last item on the buffet seems to be an effort to control how much the customer takes. Bad policy. Until that changes, my business goes to Hu Hot.

The meat is the last thing in the buffet for a reason: so that when they invert your bowl on the grill, the meat is the first thing to hit the grill!

I have to disagree with both of the previous 2 posters and say that I absolutely love the freshness of the ingredients and have no problem accessing any of the oils (I AM 5'9", though!)As far as cleanliness goes, I have been in the kitchen several times and every single time I have been in there, it is immaculate! Food is cut by hand, fresh each day (actually several times a day) and the bins are always full when I have been there.

No need to drive all the way to Spokane when we have a GREAT Mongolian BBQ right here.

Well, what can I say? I think we're having a good time because this blog isn't bad enough and most blogger can't ignore it! I's a good work because it's all about concepts, in this case Mongolia ontains very little arable land, as much of its area is covered by steppes, with mountains to the north and west and the Gobi Desert to the south. 2j3j

Just wanted to thank you, not just because the nice post, but pretty much more because my grandfather is nearly recovering from his surgery and he has almost nothing to do but staying on bed all day, his best source of entertainment has been this blog and I feel this is something good for him and his recovery.

I have to disagree with the hu hut people because I am 5 foot 2 and can easily reach the oils in the back!!! Mongolians food is amazing and there staff is amazing too. They always clean up the tables and do there job. I eat there all the time and love it!

I miss the good old working days, even thou it was my First Job. It was a great feeling and I'm glad to have been apart of the team back in 2010!

Wow! Cool post! I really like the choice of your posts especially that I am fund of reading books. I know for a fat that you can learn a lot of things when you read books. That is why it is important that you learn to teach and encourage kids to read. Parents also are encouraged to read aloud to their children.

That’s what I was looking for. I am talking about all topics bundled in this blog. They all are really very useful for me as well as for my team. We are definitely going to use its highlighted information. Buffet in Twin Cities