Pilgrim’s Market
1316 N. 4th St.
Coeur d’Alene
(208) 676-9730
"My cooking is so bad my kids thought Thanksgiving was to commemorate Pearl Harbor." ~Phyllis Diller
I can’t recall exactly who, but every Thanksgiving, in the hazy afterglow of a full Turkey Day meal, one of my relatives says it. “Tryptophan must be short for ‘trip the light fantastic’”.

It’s true; the land is always dotted with houses full of post-meal dopers, passed out from the effects of the serotonin-inducing enzyme lurking in the tender, juicy slices of festive holiday poultry. It’s certainly not an unpleasant feeling, and it seems to do the trick even better than expensive prescription pills like Ambien. The tryptophan in turkey is for the most part non-habit forming, won’t cause next-day headaches or thoughts of suicide, and of course, it’s all-natural.

A new-millennium trend toward a more natural approach to mealtime has in many ways improved the landscape of the modern Thanksgiving Day table. The experiments in culinary convenience of the 1950’s and 60’s resulted in a layout of perfectly formed, reconstituted turkey loaves, glompy instant mashed potato flakes, gelatinous canned cranberry sauce and depressingly grey canned green beans. 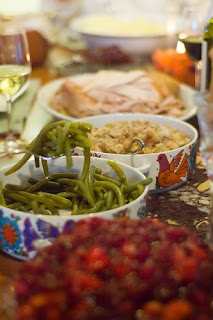 It became less about upholding a fine American tradition and more about who could show up with the most bizarrely unappetizing Jell-o mold. Although people may still have to suffer through Aunt Franny’s “famous” Pear Walnut Lime Salad every year with a smile, many have realized that convenience rarely equates with edibility.

Most major supermarkets have zeroed in on the trend, but for those hosts and hostesses who really want to get back to nature for their Thanksgiving spreads, the place to shop is Pilgrim’s Market on North Fourth St. in Coeur d’Alene. Owners Joe and Sarah Hamilton opened their doors for business in 1999, starting life as a mere sliver of its current incarnation, a hole-in-the-wall shop stocking a relatively small selection of vitamin supplements and all-natural snack foods.

They were able to slowly take over the entire strip mall last year when Liquidation World closed, and while it isn’t quite as mondo as the Whole Foods chain or Spokane’s Huckleberries, it is the largest outlet for health-conscious products and foods in North Idaho. Food snobs relocating from places like Santa Cruz and Seattle should feel right at home in the well-stocked aisles of Pilgrim’s Market.

Natural food stores were always found in trendier cities, but for a long time they were considered by many to be hangouts for hippies and vegetarian radicals, full of mysterious, inedible goods made of soy, unsweetened granola, sea kelp extracts and most heinously, carob. I was exposed to many of these left-of-center food products in my younger years by a friend’s hippy mom, and there were some I sort of grew used to, if not vaguely fond of. Popcorn sprinkled with nutritional yeast is still a favorite.

However, as a lifelong chocoholic, I could never stomach the waxy sweet fakeness of carob. That alone pretty much turned me off health food stores and I continued to eat the mass-marketed, preservative-rich, highly fattening foods served by my mother and pretty much everyone else in the 70’s and 80’s. 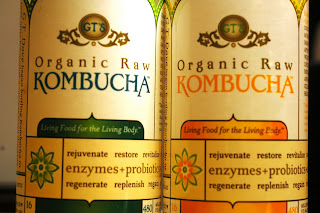 It seems the older I get, the more conscious I am about the food I decide to consume. I’m a fairly recent frequenter of Pilgrim’s, and I’ve already discovered more wonderful items than I have space to list. I’ve been indoctrinated into the cult of Kombucha, a slightly sour, naturally fizzy fermented tea beverage sold in colorful bottles that look like artifacts from old Bombay. Also on the beverage tip, their selection of imported beers from around the globe is astounding, eliminating any reason to actually go abroad.

The Pilgrim’s deli alone makes the trip worth it, with organic pasta and tofu salads, incredible garlicky hummus or egg salad sandwiches, and a cozy bistro-esque seating area. They host an active monthly calendar of cooking classes and health seminars, taught by people who seem to know a lot about these things. There’s also a full case of farm-raised meats for those who choose to cross the battle lines of vegetarianism.

Speaking of which, for Thanksgiving, Pilgrim’s Market will have a selection of free-range, organic turkeys with extra Tryptophan available for pre-order, but only while supplies last. Treat the gang to Savory Butternut Squash Salad with Thyme and Garlic and an Organic Pumpkin Pie. Even the name “Pilgrim’s” evokes images of America’s square-jawed settlers in black buckled hats, Capri pants and white tights. And what could be more Thanksgiving than that?

Posted by Patrick Jacobs at 9:59 PM