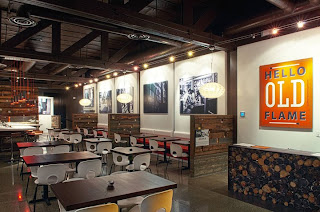 Since opening earlier last month near the tail end of an unusually not-so-sizzling summer, Fire Artisan Pizza has been setting the downtown Coeur d'Alene restaurant scene ablaze.  Basically, the buzz has been all Heavy Debbie up in local culinary circles that, to put it in the most irritatingly obvious way possible, Fire is hot. Wait - I think we can do better than that. How about: Fire is hotter than a two dollar pistol on the 4th of July. Even better: Fire is hotter than a nanny goat in a pepper patch. Or, my favorite: Fire is hotter than two rats screwing in a wool sock in the desert. (Thanks to the Cliche Finder site for these gems).

Ironically, the first time I was able to try their product, it was a couple of slices of cold pizza brought to me at my bartending job by a friend who had visited Fire earlier in the day and had a bit of leftovers to share. It was a simple cheese pizza, and although Ellen Degeneres might tell you otherwise, a plain old cheese pizza isn't necessarily the most exciting thing in the world, especially when it comes to you at a temperature only slightly warmer than Lake Cocolala on a moonlit October night.

But I'd been dealing with a crowd of tipsy drama queens all afternoon, and I was starving, so even a cold cheese pizza seemed like a luscious treat at the time. And guess what: it actually was!  Looking at the menu later on, I realized my friend had ordered a "Parma" (prosciutto, gorgonzola, pecorino, mozzarella and
provolone cheeses, finished with truffle oil - $14) but he had them hold the meaty part. I don't blame him really, because every time I think of the word "prosciutto" I once again think of Food Network hostess Giada Di Laurentis savaging the word in a hardcore over-pronunciation style and I immediately lose my appetite. Granted, she does have a nice eyebrow situation.

Anyway, the crust had gone from crispy to chewy on its long adventure toward my face, but that actually somehow added to its charms and it still tasted like a real deal delicious concoction. I ravenously finished everything in my friend's take home box, leaving him with nothing to actually take home. To make up for my uncontrollable piggishness and basic lack of social grace, I bought him a tall double whiskey and coke and both of us were quite content.

I figured that if a few slices of rather-less-than-fresh pizza could impress me that much, then it would be worth it for me to actually leave my recent constant work/Bewitched rerun cocoon to go downtown and make an attempt to put my tongue parts on a hot out of the oven slice or six of what Fire had to offer.

Hungry I was and hungry was I when we walked into the recently renovated Sherman Avenue spot that Fire occupies next door to the year-round "Christmas By the Lake" store I've never, ever visited (I lean toward Neo-Confucianism and am allergic to mistletoe). The hostess fluttered her hand around the room as she told my lunch pal and I to sit wherever, so we grabbed the table closest to the waitstaff station so we could hopefully hear them gossip and bitch under their breath about how horrible all the customers were and how they should all die in a "Fire"-y car crash in their 2012 Volvos on their way back to Woodnville, WA or Carmel, CA.

That never happened. The staff, especially our server Sean, were as prompt and polite and as Xanex librarians - no snatchy tongues flared. \There was no one for them to kvetch about - the place was basically empty save for a couple of random Craigslist dates happening in one corner and a young photographer guy with a Seattle problem running around very intently taking pictures of the place for a possible future "CDA Magazine" feature spread or something. Granted, it was around 2 pm on a Tuesday, so it was after the main lunch rush buzz most likely would have already come and gone.

Noticeable immediately was Fire's decor, which, also like the photographer boy floating about the room, seemed very Seattle damaged, but in a good way. Your basic nouveau retro circumstance. Bare concrete floors, half-walls made of raw, splintery wood blocks, open ceilings with exposed venting doo-dads, and giant black-and-white blown-up photos of (I think) random Seattle people and places doing the things that random Seattle people and places do best: looking cool in a naturally hip, slightly insouciant kind of way.

The plastic white chairs were retro like the chairs I might have sat on during first grade in 1978, but I was afraid they weren't quite sturdy enough for my frankly fat ass, so I chose a "booth" seat (aka an orange linoleum covered block of wood bolted hard to the wall). Adding to the artsy, gourmet vibe are the little round dishes of grey sea salt that adorn the center of each table, each filled up only a slight amount as if to say "we're too urbane to give you a full dish and you need to watch your salt intake anyway, Dumbo." Also, a nice touch was the fresh cucumber slices placed inside our water glasses - much more interesting than a boring old lemon to add interest to plain agua.

Don't get me wrong, Fire looks very cool (these lame ironic puns have got to stop!), but the main draw here is the simplistic fabulosity of the wood-fired pizza, made right behind the counter in a brick lined cubbyhole and brought immediately to your table all melty and sizzling. There are ten combo options available, and highlights include the "Banion" (bacon, onions, mozzarella cheese, tomato sauce - $12), the "Crimini" (crimini mushrooms, thyme, garlic olive oil, mozzarella cheese - $12), and the evocatively titled "Meat" (fennel sausage, pepperoni, salami, bacon, mozzarella cheese, tomato sauce - $15).

I love the whole musky chèvre thing, so I ordered the "Billy" (goat cheese, roasted red pepper, Kalamata olives, tomato sauce, fresh arugula ($13). This grand-to-behold pizza was even better than the cold one that my friend had delivered to me the week before - the peppery arugula was fresh and piled high atop sweet roasted peppers and large, par-melted chunks of crumbly goat cheese. The taste of the sauce was planets away from Domino's or Pizza Slut, with the distinctive flavors of the ingredients all popping in to say hello and dance a little jig with my taste receptors.

The crust was crisp, perhaps a bit too crisp for my taste, the only possible flaw I could find with the whole affair. I'm told that an extra-browned, borderline burnt crust is normal for wood fired pizzas, so I guess I'll let that one go. I had a slice of my friend's "Crimini", and it was magnificent as well, dense with rich mushroom taste. the pizzas at Fire aren't enormous, in fact they're just the right size for one person, which makes it fun to trade off and sample slices of what your co-conspirators have ordered.

The denouement to the climax of our glorious Fire Artisian Pizza tale was the literally mountainous, oven-fresh chocolate chip cookie Sean brought us out after we were already stuffed to the gills. There's always room for dessert! Especially when it's a literally mountainous, heavenly, doughy sort as this. Oh God, yum! By the time I paid the tab and got home, I'd lost complete focus on the rest of the busy day ahead and opted to tell the world to burn in a pit of heck in favor of a nice naptime.
Posted by Patrick Jacobs at 3:10 PM

Thank you so much for the great article and your thoughts on the design. HDG, my company did the design and the architecture as well as the logo and website. We would love to be able to share a facebook link? facebook.com/studiohdg

I'm from NJ, I know good pizza. I've been in the midwest for 1 year now eating at every pizza place I can find. It's been a painful journey to say the least.

Will not disappoint. I can't wait to go back!