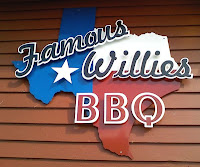 "It is better to have burnt and lost, then never to have barbecued at all" - William Shakespeare

I do believe I’ve discovered possibly the last restaurant in the entire USA with an 8-track tape player still happily in use. A wall-mounted rack full of the chunky tapes immediately jumped out at my eyeballs when I entered Famous Willies BBQ in Post Falls one recent afternoon and I was a bit perplexed. I haven’t even seen those things floating around the thrift stores in at least ten years.

An odd form of décor, I thought, but after settling in at my table, I heard Johnny Cash fade away mid-song, only to return to the airwaves a few seconds later. The waitress confirmed my hunch when she came to take my order. The 8-track action is one the many delightful quirks that, along with memorable food and an easygoing vibe, make Famous Willie’s an impressive new entry in the local restaurant handbook.

Willie Spradley and his wife moved to town from Texas and began serving their signature smoked, slow-cooked meats in a funky old converted home. The apostrophe in the name “Famous Willie’s” seems optional, as it could also refer to the several dozen “Famous Willies” whose framed photos cleverly decorate the restaurant’s walls. There’s Willie Nelson, Will Rogers, Williams Tell and Shatner, even Free Willy, along with a few others whose fame eludes me. I looked for my personal favorite, Willie Wonka, but unless he was hiding around the corner, I didn’t see him. 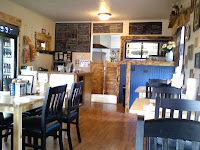 The tables and fixtures are clean and modern, but the overall atmosphere of the place is that of an old-school Texas Roadhouse BBQ joint. The slogan printed on their menu reads “We know we are not the best, bet we are the best we know”, but this seems a bit on the humble side considering the grand authenticity of the overall experience, especially the food itself. To put it bluntly, this ain’t no McRib.

The entire menu is scrawled out by hand with colored chalk on a blackboard behind the counter, which is charming but slightly difficult to read. Fortunately, printed menus are available at each table and are also hung randomly on old doorknobs affixed to the walls. Large or small sandwiches are served stuffed with either Cajun pork shoulder, beef brisket, or tender smoked chicken. Vegetarians might want to cheat when they get an eye and nose full of Willie’s barbecued meats, but they also serve a Veggie Burger for those truly devoted to avoiding the real deal. 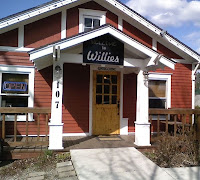 For bigger appetites, and for the quintessential Texas BBQ session, the Chuckwagon Plates are where it’s at. A full rack of “Willie’s Irresistible Tender Ribs” with two sides and a roll isn’t exactly cheap, but probably worth every penny spent. When Willie says his ribs are “a deep Southern tradition, marinated with a secret family recipe that is slow-cooked and smoke with oak”, he’s not just whistling Dixie. The smokehouse out back testifies to that fact, and the appetite reels with the wondrous potential of it all.

More reasonably priced, and also including the all-important fluffy white roll, is the Rancher’s Deluxe with three barbecued meat varieties, and a choice of coleslaw, chili beans, or Southern potato salad. The Rancher’s “Not So” Deluxe is basically the same, but stars only one meat option. Or fatten up with the Cowboy Stuffed Potato, which layers on chopped chicken, brisket or pork with BBQ sauce, sour cream and butter.

I was a little surprised when my brisket sandwich arrived naked, but realized this was meant as an opportunity to sample the four different squeeze bottles of barbecue sauce gathered on my table in an old Jones Soda box. The Jalapeno and Cajun were both my favorites because I do like it spicy, but the milder sauces were certainly do-able as well. The tender, chunky meat and Texas-sized bun met all my high expectations, and my side dishes actually exceeded them. 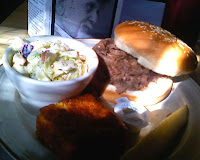 “Coleslaw with a difference” claims the menu, and the difference is that it is clearly fresh-made from scratch, includes sweet chopped apples, and is made with a delicate dill dressing. The Mexican Cornbread is a far cry above the Jiffy box cornbread I’m used to, with cheddar cheese and jalapenos giving it a weight, texture, and flavor normally only found at least 600 miles to the South. Amazing, and at only 75 cents a piece, it’s tempting to overindulge.

Actually, it’s nearly impossible not to overindulge at Famous Willie’s but I did have to draw the line when the waitress returned to offer up the home-made dessert item of the day, Peach Cobbler. A friend of mine tried it recently and she said it was completely fabulous, but I’ll have to take her word for it and assume that the extra calories were worth it.

Willie Spradley and his BBQ gang may not exactly be as famous as some of the Willies on the wall, yet. But, as evidenced by the number of full tables on the sleepy weekday afternoon I visited, if he keeps on serving the finest barbecue in North Idaho, he’ll be shooing away the paparazzi in no time.
Posted by Patrick Jacobs at 12:00 AM

I always thought the best places to eat something outside the house are those who are located at the devil's ass hidden in the middle of a desert or dense mountain. those places always give you a nice surprise.

Fantastic read, I just passed this onto a friend who was doing a little investigation on that. And he actually bought me lunch because I found it for him smile So let me rephrase that: Thanks for lunch!

The ebi sunomo is very generic and has a light tartness along with perfectly cooked bean thread noodles. Food Truck Wedding Los Angeles