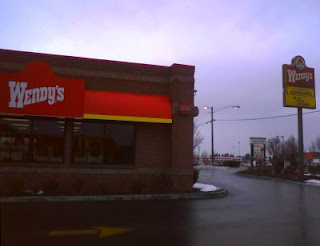 In the beginning there was nothing and God said 'Let there be light', and there was still nothing but everybody could see it. ~  Dave Thomas

You know I have a general rule forbidding myself from doing write ups on national fast-food chains, but little rules are for little minds and today I was a) in the mood to write a blog entry and b) just too damn lazy to get out of the car and check out a real, actual restaurant. So. This combination of circumstances caused me to trek through the drive up window of a place I consider to at least be one of the more tolerable burger chains on Junk Food Way, Wendy's.

As a young girl, Melinda Lou "Wendy" Thomas rocked kind of a broke down Pippi Longstocking look. She had nearly an identical hair and fashion sense as Miss Pip, but with a blank smile instead of a mean scowl. To be honest, I prefer Pippi's cruel spunk over Wendy's innocuous grin, but the latter's caricature has become inescapable, appearing on every Wendy's sign, cup, napkin, and advertisement nearly everywhere, from Toledo to Trinidad and Tobago. 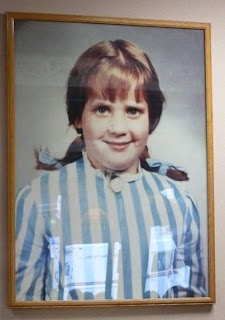 Wendy's father, the late fast food folk-hero Dave Thomas, christened his first restaurant in 1969 in Columbus, Ohio, after his daughter's nickname and fashioned their infamous logo after an especially creepy photo of the poor girl in bright red pigtails and a fugly church rummage sale blouse. Here in Coeur d'Alene, her freckled face has loomed over Appleway since some point in the late 70's early 80's (I can't recall exactly when it appeared), and was one of the very first fast food joints to appear on that stretch not long after Ronald McDonald rode into town on Grimace's big purple ass.

When I was growing up, the Coeur d'Alene Wendy's was a pretty hot place to go eat. My parents liked it because it was one of the only, if not the only fast-foot joint that had a lush, well-stocked salad bar (now long gone) and also a groovy baked potato situation. I remember thinking it was so totally oddball that their burger patties were square and the bun was round, it nearly blew my mind. Like trying to push a square peg into a round hole, only upside down and reversed and much more delicious.

The novelty value of the square patty clearly worked well, and I remember always having to spend a lot of time hanging out in the winding labyrinth of pole barriers set up on front of the order counter behind a large crowd of hungry strangers. It was always worth the wait, because even as a young one, I could recognize that there was something different about Wendy's food, something that set it apart from other shady burger chains. Plus, Wendy's has always been home to the inimitable Frosty, sort of a cross between a thick milkshake and a dish of soft-serve ice cream that was a favorite of mine in my pre-lactose-intolerance era (oh age, how you disappoint me).

It would take a huge husky dude or a very hungry butch lesbian to finish of one of Wendy's mondo-sized "Dave's Hot-n-Juicy" 3/4 lb. triple patty cheeseburgers (nearly 1100 calories!). Wendy's patties are already significantly more significant than the other chains, and three of them piled high on a bun with layers of cheese, tomato, lettuce, pickle, onion, whatever, is a huge undertaking that I've never had the tummy to tackle.

When dear old Clara Peller repeatedly commanded the question "where's the beef?" way back when, it was always Wendy's where she found the answer, and to this day Wendy's will serve you a sandwich with enough "100% real North American, fresh, never frozen beef, hot off the grill" to keep you running to Rite Aid for Dulcolax for days. 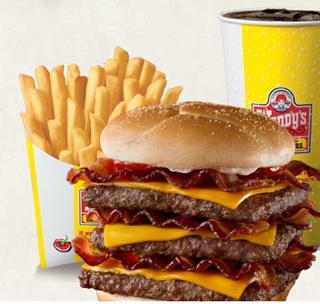 Wendy's was one of the first fast food operations to cash in on the "I love bacon" trend that's been happening in our culture for several years now (get your bacon toothpaste here), and even though it sounds remotely like a win, there's something intangibly evil about their Baconator® Triple (nearly 1600 calories!), which goes something like this: bun, ketchup, mayo, bacon, cheese, beef, bacon, cheese, beef, bacon, cheese, beef, ketchup, mayo, bun. Can you even imagine?! It's another product I've never had the nerve to try. Although I'm not exactly innocent when it comes to crimes of cholesterol, this one is enough to make even my arteries shudder in fright.

I probably hit Wendy's about once every three months or so, and I usually stick with the basics - a classic double burger, hold the lettuce and pickles and a medium fries. Nothing to make jazz hands about, and certainly not as good as a local place like Roger's or even Zip's, but still a major improvement over a meal from Burger Queen or Jack in the Crotch.

A while back, I ventured out of my comfort zone and ordered a "Cheesy Cheddarburger", and it was cheesy as fark, but not in such a good way. It was a basic cheeseburger, noticeably smaller than what they normally serve, and in addition to their normal faux American (note: not cheddar) cheese, they also pumped on a glop of bland canned cheese sauce (note: also not cheddar) to a messy, quite unappetizing effect - I couldn't even eat more than half the thing. Fortunately, I'd made a healthful decision to choose a side salad over fries, and I was able to feel satisfied with that, even though my intestines momentarily thought my leafy greens digestive enzymes had given up and gone home long ago due to neglect.

Today I tried out their 5 Piece Spicy Chicken Nuggets and they were so spicy that every time I took a bite of one I had to sneeze. No joke. There was a peppery burn to them that did something reactive to my delicate sinus tissues, they were rebelling against the pepperiness of the day-glo orange nugget breading. That's okay. It was a rather sneezy meal, but my tongue was telling me they were actually quite tasty, and I had plenty of napkins handy to catch my many aaaaah-choos. 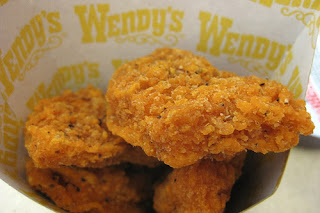 Wendy's nuggets aren't bad and actually seem to resemble actual chicken (I know it isn't real chicken), and also passable was the accompaniment, a Sour Cream and Chive baked potato, which although it came mysteriously without chives, was still fine and filling and less guilt-inducing than a pile of fatty French fries.

Melinda Lou "Wendy" Thomas grew up to become a successful franchise owner of dozens of Wendy's restaurants in the Cleveland area and has appeared in Wendy's ads for the last several years. She looks nothing like the scary pigtail girl of her youth, whereas Pippi Longstocking will have eternal youth. Still, Wendy wins - Pippilotta Delicatessa Windowshade Mackrelmint Ephraim's Daughter Longstocking has faded into the great mists of time, and Wendy is raking in the dough selling burgers that aren't quite amazing, but that are fast and edible enough to handle when the forbidden craving strikes.
Posted by Patrick Jacobs at 12:14 PM

Didn't Wendy's do a huge makeover on their burger? They call it "Dave's hot and juicy" or something close to that. Did you give it a try?

I think Wendy's is the best of the burger haven's. I love them.