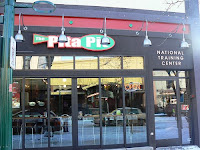 Pita Pigsty? Pita Purgatory? Pita Pity Party perhaps? There are certainly worse names possible than Pita Pit, but I do think they’re kind of selling themselves short with a name that evokes both snake-filled crevasses and dark, shadowy underarms. Far from being “pits”, the interiors of every Pita Pit restaurant I’ve had the pleasure to visit have been quite nice and clean. Maybe Pita Palace is overstating it a little, but certainly something more akin to Pleasant Pita Parlor would be more representative of reality.

Whatever, the name doesn’t at all seem to hinder the expanding popularity of this Coeur d’Alene based national chain of fresh eateries. It’s a winning concept, brought to North Idaho in 2005 by former Idaho Lieutenant Governor Jack Riggs, who purchased the fledgling chain and soon relocated the company’s national headquarters and training center here. Opening a Pita Pit is a hot business prospect for folks looking to invest in something that has an established, relatively risk-free formula for success, especially considering the cult following the chain seems to have built up so rapidly.

The finished product rolls out fast and is fun for the customers because it’s so participatory and more importantly, easy on the worn-out Velcro of their pocketbooks. It was an especially hot summer when the original store on Sherman Avenue opened, and the place was an instant hit, offering something refreshingly different from the heavy burger and fries routine. 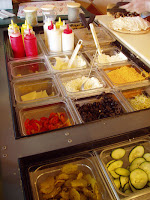 They were also, and still are, the only place for the downtown bar crowd to stumble into after three, uh five Vodka-Crans, okay six, and create a huge, unnecessary drama, then sober up in tears over a stuffed, nutritious pita. Don’t risk driving drunk all the way to Denny’s when the Pita Pit is open until 3 a.m. on weekends and midnight the rest of the week, and is located conveniently close to an especially comfortable park bench where you’ll pass out waiting for your Citylink bus home and get woken up hours later by the wet, curious tongue of a poodle on the leash of a sunrise tourist en route to the nearest coffee shop.

Faster than you could say “established, relatively risk-free formula for success,” Pita Pit expanded to dozens more locations including Spokane, Hayden and Post Falls, which remains the only local location with the added convenience of a drive-thru. This is nice for the shy, lazy and hurried, but I always like to be a part of the production, get my nose in there and direct the construction process a little bit.

My favorite creation is one I call the “Ultra-Greek.” It includes both their dense version of hummus and falafel balls, which hit the grill for a few minutes to crisp up before being tucked away inside a wheat pita shell. Next in are fresh spinach leaves, mushrooms, red onions, black olives, cucumber slices, and garden sprouts. For the dressing, it’s a generous squirt of tzatziki sauce, a creamy blend of cucumber, garlic, and yogurt. I finish with sprinkles of feta cheese, which for some reason they treat like white gold and skimp on, so I always have to beg for a little extra. No problem. 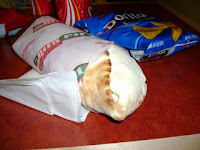 Dropping into the Coeur d’Alene store for lunch today, I created another pita combo idea. I was craving the flavors of ham and pineapple, and I half expected to see some kind of “Hawaiian” style specialty pita listed with the other big names like the “Chicken Crave” and the “Dagwood.” Not the case, so I ordered the Black Forest Ham pita and had the counter girl fill it with pineapple chunks, romaine lettuce, onions, black olives, mushrooms, Swiss cheese and ranch dressing. Aloha kakahiaka! So tasty I wanted to spontaneously break out a ukulele and warble Elvis’ “Blue Hawaii.”

With a vast variety of ingredients on hand (Babaghanoush anyone?), Pita Pit certainly lends itself well to inventing your own creations, but their menu has plenty of pre-planned options for those who aren’t into heavy decision making. The Chicken Caesar is terrific, with the ever-grand marriage of grilled chicken, bacon strips, Parmesan cheese and tangy Caesar dressing.

The Greek theme continues with Lamb and Beef Gyros and Chicken Souvlaki, and traditional sandwich favorites like B.L.T. and Tuna Salad also make a successful crossover to pita world. The current “5 under 500 Calories” promotion is easy on the fat content but not the flavor with a Light Buffalo Chicken and a Turkey & Swiss. The pitas they utilize are remarkable in their strength, sliced open and hollowed carefully, stretched to full capacity with so many wonderful things, then pulled together tight and wrapped neatly in a paper package. The end result is compact yet massive, weighty, something substantial in your hand.

Today, as I was enjoying my Hawaiian pita, I texted Q. for his random thoughts about Pita Pit. He wrote back “I like their mid-east stuff, but they use the wrong lettuce.” “Eh, how’s that?” I typed back. He responded, “Iceberg. It doesn’t get anymore school lunch than that. If they used a Spring Mix or something more she-she it would look better, taste better, and in my case, sell better.” I knew I could count on Q. for a nice negative counterbalance.

The only complaint I can possibly muster is that while Pita Pit pitas are surely delicious and satisfying, the ingredients aren’t evenly distributed enough. In one bite, you get all lettuce and in the next it’s all meat, and in the next all veggies and dressing; the layers are geographically separate and they don’t really mix unless you strategically combine them by taking a half-bite off each end, an act I’ve managed to master. It’s a small sacrifice to make for such a Plentiful Perfect Pita.
Posted by OrangeTV at 12:01 AM

I've been to the Moscow, Coeur d'Alene and Gonzaga Pita Pit.

At each, we had good food and the absolutely worst customer service of all time.

In each place, it seemed to be some great bother to take an order and actually construct a sandwich.

There is something very wrong from a corporate perspective when you see this. Either horrible training or a demoralized work force or both.

Maybe at 3 AM, it is different, but in the afternoons - UGGGH!

Nope, no more Pitas for my family.

I like that I can order online. It gets here in a flash and is very convenient.

Question: Which downtown eatery do you frequent most?
12 comments on this post so far. Add yours!

Pita pit, actually. And occasionally Paul Bunyan. But not often due to the serious cholesterol factor at PB. But every so often, it's worth it.

btw, if all goes well, I'm finally tackling a review of Hudson's Hamburgers for next week's column. I've been kinda scared to actually take on that sacred cow (sorry for the bad pun), but my visit yesterday reminded me why the place is quite worth all the hype.

What I love about OTV's columns is they remind me not to overlook the obvious. I've never eaten at Pita Pit, though I drive by two of the franchises each week.
Today, I'm going to stop in.

Pita Pit is a catchy name. A name that's representative could come out pretty lame.

Does Moon Time count as a downtown eatery?

“WingStop” for the BEST Wings in town………

Just a point of clarification, Dr. Riggs did not bring the Pita Pit to N. Idaho, unless you don't consider Moscow part of N. Idaho. Moscow was the 2nd location to open in the nation and it opened in the the late 90's. True, the Riggs did buy the company in the early part of this decade and have expanded it greatly, but they did not bring it to Idaho. That said, it's an okay place and a good concept. It was a nice change of pace when it came to Moscow when the only choices for fast food were burgers, pizza, or tacos. It also help that it is on main street and was strategically positioned to get the bar hopping crowd :)

Idawa - I read it as bringing the headquarters to North Idaho, since there was no U.S. headquarters and the Canadian owners managed both companies from Ontario, Canada. Maybe I'm wrong.

Technically Moscow is part of “North Central Idaho”, but that's getting pretty nitpicky. I hadn't realized the Moscow store was so early in the history of things…

So it turns out I was wrong. Dang it, OTV, fact check! :p

In the day, we used to be regulars at JimmyD's and then the Wine Cellar. We no longer live full time in the area, and things have also changed quite a lot since those days. Moon Time is always great.
Hudson's is tradition! May it live forever! I find it interesting that collectively, no one mentioned any of the restaurants that are CdA Resort run/related. That says a lot without saying anything.

San Fran Sourdough, Olympia, Toro, Pita Pit. I don't consider Moon Time to be downtown but it is my favorite lunch spot.