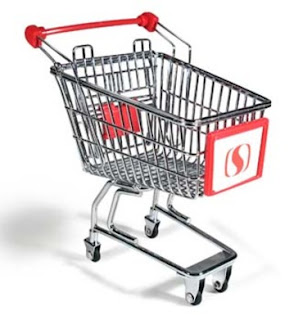 "The ability to make small children cry at the grocery store I like better than the fame." ~ Marilyn Manson

One of the most unfortunate aspects of Safeway’s recent remodel of their Midtown Coeur d’Alene store was the sudden disappearance of the old sign at the corner of 3rd and Miller which proudly proclaimed “Serving Coeur d’Alene Since 1938”. Still, Judgment Day must eventually come for all things, and the sign had most likely been in use since the last time the store had a facelift around 40 years ago. In other words, the place was in desperate need of an update, and the replacement sign’s modern, minimalist rendering of the Safeway’s latest corporate logo is an accurate representation of the store’s slick interior improvements.

In the late 1990’s, when Safeway opened a comparably large new store on the north end of town, people speculated about how long it would be before the company would give the ax to the crusty old store in Midtown. The old Safeway has for decades been pretty much the only place remaining in the downtown area where one can buy a can of tomato soup and a box of oyster crackers, and although it had stayed busy, it had fallen into such a rough physical state that it became known by many as the “ghetto Safeway”.

When word got out earlier this spring that the store was not only staying put, but finally stepping into the 21st century, regular customers like me were abuzz with excitement. Well, for a minute anyway.

Once the workers came in and started pulling up the grungy old tiles and shuffling entire departments around randomly, the grocery shopping routine became a bit surreal and chaotic. I’ve frequented the old Safeway since I was just a kid throwing hissy fits over Count Chocula and I’d always been extremely familiar with the layout, so when things went all topsy-turvey on me, it took some adjustment. 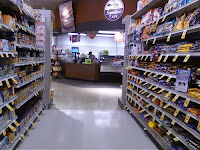 One afternoon, as the Ramones’ “I Wanna Be Sedated” quite appropriately blared over the PA system, I nearly lost my mind trying to find a jar of maraschino cherries, only to realize they were where they always had been, seemingly the only thing in the entire store that hadn’t moved to a different aisle. Another day, I discovered that every drink cooler in the store was blocked off with yellow caution tape, and I had to beg a stocker to sneak through surreptitiously and grab my Orange Crush. “How much longer must we bear this insanity?” I’d ask the cashiers, a desperate quiver in my voice and a bead of sweat on my brow.

Okay, it wasn’t really that bad and overall, the project seemed to be relatively quick and painless. The end result is basically a miniaturized version of the larger store uptown, with its blonde wood tone flooring, mellower lighting situation and up-to-date shelving and fixtures. I’ve noticed new products popping up here and there that I hadn’t seen before, including Greek Yogurt, a deliciously creamy substance to which I’ve become fully enslaved. They’ve added a floral department, upped the inventory of organic fruits and vegetables and bakery goods, and enhanced the store’s deli with the addition of some tables and a sandwich bar a la Subway.

It seems they might still have some kinks to work out on that last concept. A friend related lately how he decided to try out the new sandwich bar on a recent lunch break and ended up amused, but less than impressed. He requested a Turkey and Swiss Panini, which not only arrived with warm, wilty lettuce unappetizingly commingled amid melted cheese, but had been heated in a regular toaster oven rather than a grill press. This does not a Panini make.

I also can’t say that I’m overly fond of their selection of deep fried chicken strips, corn dogs, burritos, and jojos. My advice is to arrive early if you’re craving these items, as I learned the hard way on a late evening when I bravely gnawed my way through jerky-esque all-day chicken strips and a shredded beef burrito that appeared to be the survivor of a recent nuclear catastrophe. 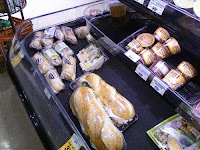 Still, their “Signature Café” line of pre-made sandwiches and deli salads are among the best in town, and seem to have actually improved a hair or two in quality. Many grocery store deli sandwiches suffer from acute cases of Slimy Tomato-itis and Stale Bread-itosis, but Safeway puts out a selection of pre-wrapped hoagie-style and traditional sandwiches that are fresh enough to make you tell the cashier “let’s do lunch” on a regular basis.

The new seating area consists of three tiny tables and probably won’t win any awards for ambience, but it might be a logical place to plop down and take a work break or have a mid-shopping bite to eat. Offering everything from sushi rolls and a selection of interesting soups to cheap whole roasted chickens and a fully loaded baked potato salad, they cram a surprisingly wide array of grocery deli munchies into a small, attractively contemporized space.
Posted by Patrick Jacobs at 12:00 AM

Thanks for letting me know about the tiny tables in the deli. I go there practically daily and haven't even noticed!

I struggled as well when they were remodelling. Going for the beer one day, a helpful employee told me it was sitting warm, near the produce, where the bread used to be. He then told me several customers felt that Safeway should have sacraficed the dairy items to keep the beer cold :)