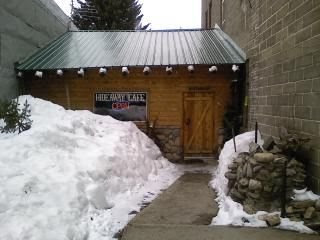 The Smithsonian Institute was signed into existence in 1847 with the mighty, wild-haired pen stroke of “Old Hickory” a.k.a. President Andrew Jackson. Its mission was to record essential historical minutiae such as Andrew Jackson’s nickname, and to spread knowledge through the preservation of artifacts like prehistoric Sloth Dung or a life size bust of late comedian Milton Berle. For many of their museum exhibits, they’ve meticulously disassembled, then reassembled noteworthy places, like they did in 2002 when they put Julia Child’s original TV kitchen on display, including every spatula, nut grinder, and half-imbibed bottle of cooking sherry.

On a recent crisp and sunshiny morning, Q. and I stumbled upon, quite by accident, a place that the Smithsonian folks might be interested in preserving as an example of a classic Northwestern American café with an attached barroom. Upon thorough examination, the Hideaway Café in Spirit Lake is a perfect specimen in nearly every detail; a place which, for aficionados of small-town old-fashioned diner/taverns, is equivalent to an avid birdwatcher unexpectedly spotting a rare Yellow-throated warbler and managing to snap a photo. Both discoveries inspire delight and awe and provoke an urge to capture them before they finally hit extinction.

We made the northern trek that day with the idea of investigating a new Mexican place suggested to me by a work friend. We got out of the truck and looked around, soaking in the historic charm of downtown Spirit Lake. “Cute” is an adjective which I seldom-to-never let escape from my lips or typing fingers, but I can’t think of a better word to describe Spirit Lake’s tiny-but-impactful collection of multi-sized and multi-colored restaurants, bars, and massage therapists. It’s cute like a Danbury Mint series of old-timey miniature light-up ceramic buildings ordered through the mail in fun, once-a-month packages until the entire town was complete. 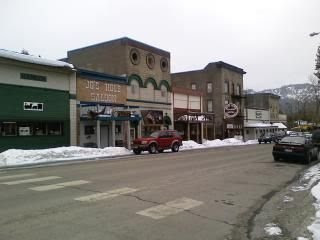 We now realized that although Mexican did sound nice and all, there were several other dining options before us, and after a moment of deliberation, we both agreed that the Hideaway Café had some sort of gravitational pull, a curious sense of fate. Indeed it was “hidden away”, tucked back between two much larger buildings. Walking up to its lacquered wooden door and grasping the handle, we took an anticipatory breath not knowing exactly what we were about to walk into; I pictured some sweaty Betty slinging grits and pouring pitchers of Olympia for a roomful of sloppy-drunk lumberjacks. Not quite.

The place was utterly deserted save for one petit brunette woman who looked eerily like she was somehow already expecting us. “Hi guys, sit anywhere you like,” she croaked cheerfully, so we chose a corner table near the kitchen. We looked around, amazed at the precision perfect rustic Idaho-ness of the place, complete with knotty wooden walls, colorful bouquets of fake wildflowers, and a giant wagon wheel, reformatted effectively as a light fixture. This type of decorating motif can often encourage a sense of dreary grey dustiness, but the rafters and crannies of the Hideaway Café are kept noticeably clean and sparkly.

Even Dolly, our hostess, seemed like a delightful relic from the Old West in her elaborately bedazzled red cowgirl shirt and blue jeans. Q. gets queasy easy when we accidentally end up dining someplace where the chef appears to be maybe a drug-addled ex-con, strong b.o., missing fingers, history of animal abuse, whatever. With Q., no kitchen staff are safe from suspicion, so it was quite nice to hear him declare that the middle aged gentleman behind the Hideaway grill looked “real nice and clean,” even leading him to say “Wow, I’m not even scared of eating what he makes, you know, what he touches.” We’d soon realize that just like a certain Mr. Goldfinger, the man had a Midas touch, a magic way with classic, delicious American cuisine, done unpretentiously and with pride.

The dinner special for the evening was written up on the dry-erase board; Steak or Chicken Oscar with King Crab, Asparagus, and Hollandaise. Yum! For under ten bucks even. Amazing. The dinner menu reads in similarly rich-but-affordable fashion, highlighted by BBQ Pork Ribs, Pot Roast, and Cajun Shrimp Linguine. With the attached White Horse Saloon just an open doorway away, deep-fried bar faves such as Nachos and Jalapeño Poppers are plentiful as well. Any true cheap beer and cigs experience is incomplete without deep fried pickles, and the Hideaway’s got ‘em. 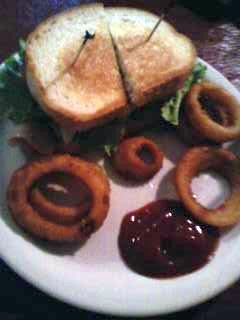 Breakfast is served up until noon, which was about twenty minutes before our grand entrance. We pointed our attention at the lunch list and Dolly returned fast with tall Pepsis and to take our order. I settled on a simple Grilled Turkey Avocado Melt, and chose onion rings as my side selection, fully ignoring the imaginary Richard Simmons-esque diet imp popping up behind my shoulder nagging “Get a salad!” Glad I didn’t. These were Smithsonian Institute onion rings, and my sandwich was a Smithsonian Institute sandwich, as if they should be shellacked, catalogued and encased in glass as perfect textbook examples. It was lunch as Pop Art.

Moist turkey piled high, crisp tomato slices, vibrant green lettuce, thick avocado chunks and lightly melted Swiss cheese tucked between buttered slices of Texas toast and all held together with one of those toothpicks with the spangly plastic end. I wondered aloud if there were greenhouses out back, everything was so fresh. Q. was in mad love with his Oly Burger, a giant beast that he finished to very last bite, a rarity.

It was Valentine’s Day and since neither one of us actually had a Valentine this year, we decided to follow Dolly’s suggestion and have a guilt-free ménage a trois with one of their home-made Peanut Butter Brownie Hot Fudge Sundaes. The warm gushiness of the brownie tangoed with the coldness of the peanut butter ice cream under hot chocolate syrup, and across the universe, a distant star exploded in ecstasy. Like everything else at the Hideaway Café, it was another museum-worthy triumph of luscious Americana.
Posted by OrangeTV at 12:01 AM

We'll have to try this place but who else has deep fried pickles?

Now that Chef Gordon is gone we will not eat there as the food lacks...taste. Enough said the better. Pray you don't eat when the owner is cooking..bland and lifeless.

Whoever wrote this article was so elitist and snooty that it was silly. The Hideaway used to have great primerib but seems lately the quality has succumbed.

@Leslie Maynard: I take it sarcasm and tongue in cheek comments tend to fly over your head? :P I'm not the blogger nor do I know anyone that writes for this blog, but to me the sarcasm was obvious.