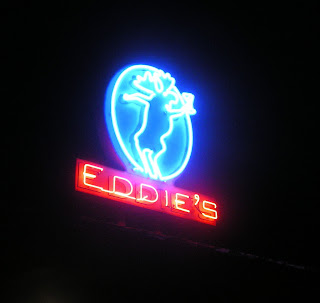 I get excited about the rare occasions when I’m able to spend a leisurely summer evening sculling around Lake Coeur d’Alene on the family watercraft. There’s something especially rejuvenating about the cool, misty wind in my hair and the smell of the secondhand ultra-light menthol cigarette smoke that constantly emits from my parental units. I love the remarkable view of the city skyline and the ambient sound of frat boys vomiting over the sides of the Mish-a-Nock. Most of all, I enjoy the wine-induced disorientation that always causes our captain to panic and curse after becoming completely lost trying to find his boat slip in the black of night.

Recently, I had the honor of being one of the first guests aboard my mom and stepdad’s newly purchased speedboat. A cruise of the lake with my dear mother and stepfather is always nothing less than high adventure. I christened the craft “Mrs. Ro-boat-o”; she’s an 80’s model with retro-futuristic dashboard graphics straight out of the movie “Tron”. We decided to make Arrow Point our destination for the evening, specifically Eddie’s Bar and Grill. We were curious to see how it had changed since the Gozzer Ranch folks rolled in and took it over a few years ago, upsetting quite a few locals in the process by hogging city docks, lighting fireworks without permits and worst of all, they did away with the former Arrow Point Grill’s beloved Thursday night all-you-can-eat spaghetti feed.

Eddie’s and the surrounding condos have the look of an Alpine ski-lodge but the vibe of a tropical island getaway, with bikini babes sunning in lounge chairs and kids splashing around with neon colored beach toys. Drifting into the marina to park the boat, one can almost smell the scent of money on the breeze. When a valet met us on the dock to help tie down the boat and make sure we weren’t unwanted riff-raff, it became clear the place was no longer the ultra-casual “Cheers on the lake” of yesteryear.

The glint of the rhinestones sparkling from all the ladies’ big sunglasses rivals the sun itself for sheer glitz, not to mention the actual diamonds on their fingers, and nearly all their husbands sport a certain Hawaiian-shirt and white shorts ensemble that says “my doghouse is worth more money than your car.” We found a nice table on the expansive deck but before we had a chance to sit, a waiter zoomed in and snapped “That table’s reserved! Do you have a reservation?” It hadn’t crossed our mind to do so on a Wednesday evening, and we were told by the much friendlier hostess that it’d be about twenty minutes. 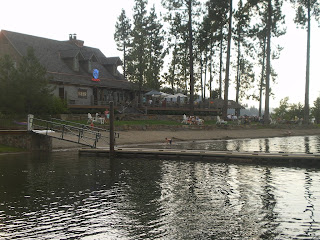 Settling into some overstuffed chairs in the waiting area, my mother and I passed the time by scanning the crowd for famous faces. Vanna White and Rush Limbaugh are have reportedly been spotted there recently, but all we could find was a guy who sort-of resembled a bald David Hasselhoff. We were melting in the heat and quite parched, and when our waiter finally led us to our table, he gave us menus and took our wine order but brought no glasses of ice water, a pet peeve of mine. I held my thirst as we discussed the ins and outs of the menu, noticing that most options were comfortingly traditional and surprisingly affordable.

Appetizers include classic pleasers such as BBQ chicken wings, shrimp cocktail and Walla Walla onion rings. The “Eddie’s Best” burger, the cheese steak, the B.L.T. and other sandwich selections come with a choice of fries, rings, a house salad, sautéed veggies, a fruit cup, or delightfully, macaroni and cheese. The Pulled Chicken Taco Salad, the Blackened Salmon Caesar and the Oriental Ahi with Cabbage Slaw are some of the more creative options for those who like to nibble the greens. Naturally, I turned my attention to the significantly more expensive entrée section after my stepdad told us he was footing the tab. As our waiter took our order, I mentally noted his name badge; it read “$cott”, a dollar sign standing in for the “S” in an act of subtle irony.

Our appetizer arrived, a towering plate of nachos which were tasty and visually appealing, multicolored chips under plentiful avocados, jalapenos, sour cream and small chunks of chicken. Oddly, instead of actual cheese they chose to use a canned nacho sauce which got cold and gloppy immediately. We were ravenous enough to not really care, but it was ultimately just a tease for the main course.

The wine was flowing and time tends to fly when we all get caught up visiting. Eventually, we started to realize that the folks at the next table, who arrived ten minutes after us, had ordered, eaten and were having their table cleared. $cott had come by at one point to say we were “only four tickets back” but that seemed like ages ago, and we weren’t sure exactly what that sort of kitchen lingo meant anyway. Our dilemma was that we needed to head back across the lake before sundown because my stepdad has a knack for getting lost on the lake after sundown. My mother and he once cruised the waters for hours, unable to find their way home and when they finally found Coeur d’Alene were so loopy they didn’t recognize it at first, thinking they had ended up at some dazzling new casino. 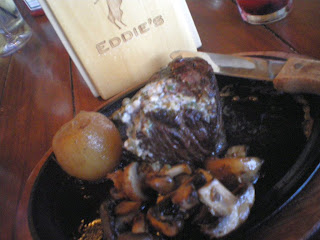 My parents’ patience was being tested so they decided to step out for a smoke. Of course, this is a classic, no-fail way to make the food arrive. My stepdad had ordered the Alaskan halibut and when the server set the plate down, his face grew suddenly long with disappointment. Certainly, at a nice place like Eddie’s, one would expect more than a nondescript strip of shriveled fish atop a small mound of shredded vegetables, especially for the price it was listed at. Even worse, he tasted it and fully grimaced. I snatched a piece with my fork to make sure he wasn’t just being persnickety. Indeed, it was rubbery in texture and devoid of flavor save for the faint taste of a burnt oven. Charitably, my mother offered him half her BBQ salmon, which was actually quite scrumptious, as were the accompanying huge onion rings, which they also shared.

My filet mignon, on the other hand, was awesome, cooked to a perfect melt-in-mouth medium-rare and served with plentiful hearty mushrooms and a whole roasted onion. It was impressive and memorable, as was the garlicky side of mashed red potatoes. When $cott returned, we clued him in on the halibut disaster and he apologized kindly, saying he’d be happy to subtract it from our bill. Even better, he told us that in lieu of our eternal wait, dessert was on the house. All bad feelings were instantly erased as we dug into our slices of Tuxedo Cake, a divine concoction made with alternating layers of creamy chocolate mousse, white cake, chocolate cake and an intensely dense fudge frosting. It was so phenomenal that I’d swim all the way across the lake just to have another slice.

We waddled down to the dock and back to the boat, stopping to amaze at a huge and superbly luxurious wooden boat tied up front and center. “That’s John Elway’s little baby” said the valet, which made my mom and I momentarily flustered that we missed a real celebrity sighting until we both realized we had no idea what John Elway looks like anyway. I’ve never followed football at all, so he could’ve been standing at the urinal next to me and I’d have never known it. 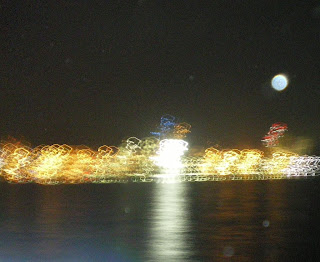 Unfortunately, we missed our goal to be back in town by nightfall. Actually, the lights that surround the lake are a lovely sight to behold; that is except for Hagadone’s obnoxious Casco Bay monstrosity which successfully attempts to recreate daylight. My mom and I were enjoying the relaxing night ride when suddenly we slowed down to a crawl. I looked up to realize we were feet away from running straight into the log pilings that surround Cedar’s restaurant. “Where in the hell are we?” my stepdad announced, a quiver of confusion in his voice. We tried in vain to direct him, but when he gets in that mode, his hearing and attention span fly away like a moon bat.

With a dull ka-thunk, we rode right over some unidentified water object and sure enough, the boat engine died. The smell of gasoline permeated the air as I glanced at my mom who was seconds away from absentmindedly lighting yet another Virgina Slim. “No!” I yelled and reached out to snatch it from her hand. Miraculously, the boat started up again without effort and after a bit of guidance my stepdad slowly began to recognize our location and steered us into the boat slip. I jumped off onto the safety of the dock, just happy we made it back in one piece. I thanked them for a good time and a wonderful dinner but made them vow to stick to boating during daylight hours only, for the safety of themselves and Lake Coeur d’Alene itself.
Posted by Patrick Jacobs at 11:49 AM

Yeah they pay the crew the works out there a lot of money to give shitty service and make mistakes. At least with Arrow Point you knew exactly what you were in for when you showed up. No out ragious prices, just good cheap entertainment and fun!

I like that place because it's almost in the middle of nothing and you can watch the stars on night.

ey I know this place, I think that I was in there in a occassion that I was in a beach, ahhhh I can remember now, yeah the food is fantastic.

Hello admin – That's surely the superb seeking weblog I have seen. It had been completely simple to comprehend and it had been easy to look with the information which i wanted. Wonderful web design and useful content material material!

Eddies makes a mean burger. This is a great stop whether arriving by boat or driving in via Arrow Point.

Just heard on the news tonight that you’re going ‘elite’! That you're becoming a "membership only" greasy spoon. That’s just great! We have been boating and enjoying what Lake Coeur d’Alene has to offer for many years. We were coming to you when your broken down docks were on logs and ready to dump us into the water. That’s back when we ordered a basic burger or hot dog in your plastic basket lined with waxed paper and had no choice but to sit out in the weather to eat it. We rejoiced with you when it appeared that business was doing better and you were on your way up. We were so happy and proud of you when you turned that corner and became a REAL restaurant! We supported you the whole way. And now that you think you’re a big shot, you’re going to shun the very public who helped make you??? I am ashamed that you have turned your back on the area who supported you for so many years. Shame on you. Shame on all of you.
By the way, we’re doing pretty well now and can well afford whatever your membership price is going to be. Too bad we’re so disgusted by your choices that we won’t be joining anyway. I sure hope the Californian’s love you, because the Coeur d’Alene natives will hate you now. Hope YOU eat it on this one!

Wow, now closed to the public. Gozzer Ranch members only. Get out North Idaho is right, elected officials are selling it off to the highest bidder.