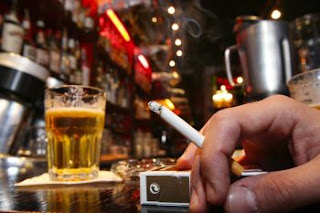 Coming of age in the 70’s and 80’s, I’ve witnessed first hand the now-nearly-complete cultural transformation wherein the once-adoring public decided to go healthy and turn their backs on cigarette smoking for good. At least here in North Idaho, smokers got away with things back then that seem completely unhinged today. I started high school at a time when there were actually smoking areas inside every school building, for teachers and students both. Couldn’t find a sitter? It wouldn’t have been unheard of to drag your child along to the bar while you sat for hours, smoking Tareytons and getting sozzled with the gang. That’s what pinball machines, then video games were for, to keep the kids from nagging you while you ordered another shot of whiskey for the road.

Smoking was glamorous, associated with movie stars and high sophistication. People smoked openly everywhere, and if you complained about it you were an un-American communist. At the grocery store, in the doctor’s office waiting area, during job interviews; everyone smoked their way happily through life. Through the seventies, especially in bars, taverns, lounges and nightclubs, smoking was practically mandatory despite the occasional oversprayed or jheri-curled hairdo going up in flames from lit ciggies waving around on the dancefloor. It was all part of the adventure. 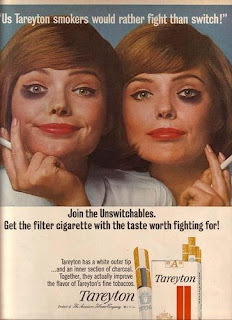 Then, at some point during the disco comedown era, scientists had to go and ruin our smoky fun with all their research naming tobacco as the primary cause of approximately 2, 457 diseases and ailments. With that news, the atmosphere began to change. First thing on the agenda was to scare the nation’s children with anti-smoking fear tactics. I vividly remember a gentleman from the lung cancer association visiting my third-grade class and telling us that if we really loved our smoker mommies and daddies we should go home and tell them how much we were worried because certainly they were going to die if they didn’t quit. My mommy happened to be a proud smoker and she laughed uproariously when I told her this, a tear welling up in my eye.”Oh, really? How cute, now they’re trying to brainwash the kids now too,” she cackled.

Non-smoking sections came into vogue, and with them came righteous non-smokers sneering down their noses at those who lit up, coughing and waving their hands dramatically as if one whiff of second hand smoke was the devil’s plan to infect them with an instant black death. Cigarette advertisements were pulled from TV, and today it’s verboten to even show anyone sneaking so much as a puff on the small screen, for fear some impressionable youth might find the idea cool and appealing. These days it’s not exactly hip and there’s nearly no place left for teens or anyone else to smoke anyway. Soon, the law will likely only allow anyone to smoke on the rooftops of odd-numbered buildings after midnight.

I have multiple personalities when it comes to smoking. Of course, I realize it’s not a good idea to smoke at all, but there’s something about hanging out with friends at the favorite local watering hole, having lively conversation and cold beers, that just goes so well with the urge to chain-puff. I don’t allow smoking in my house or car, even the scent of smoke in public can make me ill some days, causing me to glare angrily like a real non-smoker. I can go days and weeks without the thought of lighting up even crossing my mind, but as soon as I go out on the town, I turn into a regular Bette Davis, lost in a Marlboro Light haze. 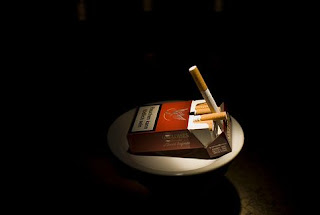 Until recently, I was able to indulge this quirk nearly everywhere in town, now only a handful of bars remain where they still have to wash ashtrays when the night is over. Idaho did pass into law several years ago an ordinance banning smoking in restaurants, but have yet to follow many other states by also killing it off in taverns, bars and clubs. Despite the legality of it, the majority of bar owners have decided to voluntarily go non-smoking, the most recent being Mik-n-Mac’s whose ban became effective last week.

Some downtown Coeur d’Alene night spots are lucky enough to have some kind of attached veranda or sidewalk where people can smoke until they gag, like the Iron Horse, Cricket’s, or the Eagles. For others, the idea presents more of a challenge, like the Shore Lounge, where there’s a constant flow of people bringing their elaborate touristy drinks with them through the lobby and up the elevator to the top of the parking garage to get their nicotine fix.

The lack of a convenient smoking area was one of the major factors keeping smoking inside at Mik-n-Mac’s explains owner Rita Mikalatos. She finally decided to ban smoking for good after a poll she placed on the bar’s MySpace page indicated that most people would prefer the popular danceclub to be a smoke-free environment. She feels it’s inevitable that Idaho will follow the trend and ban smoking in bars eventually anyway, and now that she doesn’t have to worry about smoke damage, she’s given the go-ahead to some long-planned renovations. 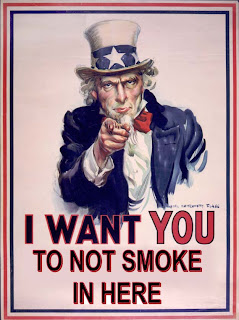 That’s real nice and all, but the decision really hit home for those of us used to it being basically the last remaining place downtown where one could smoke away guilt-free. Perpetually puffing regulars inconvenienced by the new rule threatened to boycott, jump ship and head north to the Corner Bar, the Sunset or D’Mouse Trap. Yet, there we were anyway on the first smoke-free night, shivering in the cold and conversing loudly over the noise of heavy raindrops on the metal awning, speed smoking in the mist. We’re adaptable creatures, and quickly realized that having to go outside made it a kind-of “special occasion” where we could have bonding moments with other displaced smokers; total strangers sharing in a common cause.

I have to admit, it was nice to come home without smelling like I was attacked by the Ashtray Monster and I’ve found that I only pop outside three times all night to puff, versus the full pack I used plow through, between myself and all the folks that bum. I suppose it’s time to just give in and kick the habit before smoking is entirely outlawed, and that’s likely to happen very soon. Still, I know that even after I quit, I’ll always have a soft spot in my lung for those heady nicotine heydays.
Posted by OrangeTV at 8:00 PM

It's really nice to have the freedom to make their choice.

First they came for the cigarettes, and I didn't say anything because I'm not a smoker... :)

Four comments on this post so far. Add yours!

IMO each place of business should be able to decide whether or not they want to ban smoking in their establishment.

Doesn't Spokane already have a smoking ban in place, for public places.It seems as if Idaho, alot of times follows Washingtons lead in implementing laws etc.

Let the market decide. As a bar owner, you should be able to choose your regulations. If the non smoking places are so desirable, they will prosper. Same with bars with, at least smoking areas.

Ban it everywhere, it's a scourge.

Wait a minute... did you said "smoking was glamorous"? I had never heard something like that before! It's a ridiculous argument and you'd add something else to solve that mistake because I don't care how "sophisticated" can be that, I think it's an stupid action. 23jj

once again the government controls us

Yeah the government controls us and these multinational companies controls government, the recent tax increases on tobacco products are part of this, i was annoyed by these bans and moved to electronic cigarettes.

It's been like half a decade when these bans were first implemented, a lot of time has passed and we haven't been told about the results, are such bans useful, the utilization of tobacco decreased during these years or not?.

Whatever you have provided for us in these posts really appreciative. white freakshow

I gained new knowledge from well written content of this blog. It is showing some different kind of strategy to keep work better and improve with every new assignment. Gracefully written blog Online tax free cigarettes

California banned smoking in ALL bars and restaurants in 1995. Bar owners screamed that they would LOSE a ton of business, and declared they would fight this all the way to the Supreme Court. CNN even did a false news story saying that most bars ignored the law. That was not true. In fact, amazingly the bar owners all shut up within about 6 months of the new law because their businesses all increased by large! Many more people decided to go to the bars. The smokers were keeping the non smokers away!

So all of the nay-sayers who scream that their rights are being taken away.....too bad. And those owners who say they will go out of business? Think again.

One more note....Louisiana banned smoking in all casinos, the casino owners screamed! But complied. And guess what? MORE people now go into those New Orleans casinos than ever before. Too bad smokers, you do NOT rule the roost any more. Eventually the CDC will declare an outright ban on cigarettes. Then what will you do?

Thanks for sharing it. Love your content!
Keep up the good work! Will definitely follow it up…
And please do not forget to buy cheap cigarettes free shipping at our store…Order now kiss cigarettes online at best price you can find around…

Our company is an end-to-end, customer oriented company that is focused on providing tailor-made travel solutions.
Kyrgyzstan travel