Get Out Goes West - Taste of India 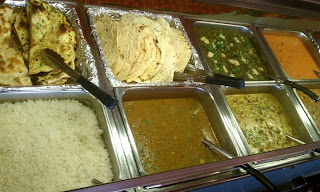 North Division Street in Spokane is one of the most visually cluttered stretches of road in the great Northwest, if not the entire nation. Little ticky tacky mom and pop pawn shops mingle with mega malls, bong stores, eleventy million Chinese restaurants and legally questionable happy ending massage parlors. Wordy signs of every color, size, height and width imaginable hover over the landscape from all directions, up down and sideways.

It ain't necessarily pretty, but gazing down from my perch at the the window seat at the south end of Taste of India, the long grey stretch of Division that runs between the restaurant and the grey, blocky edifices of downtown Spokane seemed kind of charming in a doomy, post-industrial kind of way.

Maybe it was just the hazy, hallucinatory bliss brought on by three and a half trips to Taste of India's alarmingly magnificent buffet situation that had me looking down at dirty old Spokompton in such a wisty-eyed way. Indian cuisine is something you really can't find much of in North Idaho, unless you count a trip to the frozen food section for an Amy's Organic Palak Paneer, which actually isn't that bad when the craving strikes, but doesn't come anywhere close to the real deal. And Taste of India is  the real deal, no doubt about that.

Proper preparation of authentic Indian cusine requires a clay oven known as a Tandoor, and Taste of India's Tandoor is evident smell-wise as well as visually, proudly displayed via the semi-open kitchen in the family-run establishment. As their menu explains, great Indian food also requires a lot of spice knowledge - a good Indian chef understands that "the art of Indian cookery lies not in high spicing but in the delicacy of spicing".

Owners Ajit and Hardish Singh and their crew get it, for the most part. Not that Taste of India isn't utterly addictive, affordable, and quite copacetic overall, but as a person who likes his curries and such to go bang bang in his mouth with spice and flavor, the entrees offered up on their $9.99 all-you-can-eat lunch buffet are a bit on the flaccid side. I'm thinking that they're wanting to keep the buffet table safe and neutral for the sake of spice weaklings who might faint at the sight of a decent ultra-spicy, red and saucy, tongue singeing plate of Chicken Vindaloo.

I reckon that's understandable, and perhaps next time I'll order a dish from the real menu and see if I can have them kick it up a few notches, but my roommate and I were left with a touch of bland-itis on our recent pilgrimage to the Taste of India buffet line. I'm not really complaining, I love the place anyway for various other reasons - the service is friendly and the atmosphere is relaxing and un-rushed with Bollywood music playing softly in the background, walls in muted mustard and eggplant, crystal-esque chandeliers, and a colorful Hindu-flavored mural.

We arrived a little early for the lunch rush that would soon encroach, so we had the advantage of not having to wait in line and we had pretty much the first stab of the day at the just-prepared bins of fabulousness, before the cootie people had a chance to spread their little filthy germs all over the buffet table. Actually, I'm not terribly freaked out by the ill potential of a public buffet scenario, but my roommate most certainly is and he was happy to have beat the crowd.

I always like to try a bit of everything on offer, and on the day we arrived there were some familiar favorites as well as a surprise or two. Naan (a leavened flatbread) is the backbone of any Indian buffet and Taste of India does it very well, with both plain and garlic Naan cooked to a heavenly textural perfection in the Tandoor - a little chewy on the outside crust and soft and tender inside. The cracker-like Papadum bread adds some necessary crunch to the plate, and I like to use it to sample the various chutneys and sauces available on the cold table. Basmati rice always rocks, providing a fluffy, delicately flavored bed for the various entrees to splay themselves upon. 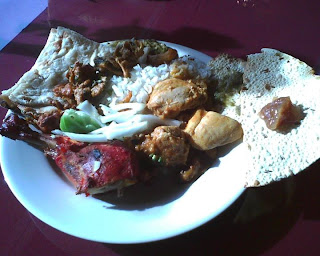 Butter Chicken - just the name alone is enough to make Paula Deen don a sari and dance the Bihu to a little Bhangra music, although it's not as buttery as it is tomatoey. The sauce did seem just a touch on the thin and watery side, it was sweetly tangy and the chicken itself was tender and moist. Similarly, the perfectly-done Tandoor-cooked chicken meat itself was the highlight of the yellow Chicken Curry on offer, rather than the sauce it was cooked in. It was pleasant enough, but that's all it was, and like I said earlier, I prefer my curries significantly kickier in the turmeric and red chili departments.

I'm a big fan of Saag Paneer (cubes of a mellow, homemade cheese and pureed spinach in a flavorful sauce), and I was more than happy with taste of India's version, but my less-experimental roommate wasn't so keen, calling it "hippie baby food" and leaving it untouched on his plate. The Tandoori chicken was a bigger hit with him - he must have eaten three birds worth of red, garlicky thighs. I prefer to chow on the drumsticks, cooked so magnificently to falling-off-the-bone sublimity. Also, both of us were totally enamored with the crunchy bits of deep fried spinach dipped in creamy yogurt sauce. Deep fried spinach!

I realized I might have a serious Naan problem, a potentially life-destroying addiction that I'm guessing they don't really have rehab clinics for. Even after I was full up to my armpits, I kept going back for more of this amazing breadstuff. For dessert they had weird little fried dough balls soaked in a cold, sugary syrup - a dish  called Gulab Jamun. Honestly, neither my roommate nor myself were particularly impressed - they were unenjoyably soggy and mushy and just plain odd. So, to make up for the slight disappointment of the dough balls, naturally I went back for just one more piece of Naan.

Overall, the dishes served at Taste of India may not the best ever but they're quite good and in my opinion they're by far the most authentic Punjabi in Spokane. Fully stuffed, I struggled up the short flight of stairs to the top section of the restaurant where the register was and had a complete doh! moment. I'd been to the place a handful of times and never realized that an extensively gorgeous bar of booze took up a significant portion of the upper level of the place. I guess I'd always left the money on the table and exited through the south door. My roommate and I smacked our foreheads V8-style and looked at each other thinking "Damn, we could have been having cocktails the entire time!" Ah well, there's always next time and there most certainly will be a next time.

Posted by Patrick Jacobs at 7:00 PM

Email ThisBlogThis!Share to TwitterShare to FacebookShare to Pinterest
Labels: Get Out Goes West, Indian, Spokane