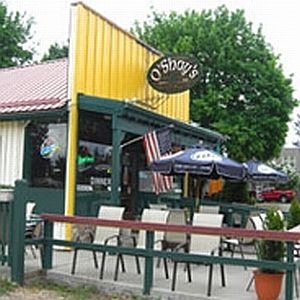 
"Sláinte!" Literally, it translates to "health", but somewhat ironically it's the word heard most commonly heard in the air back in olde Eire when friends and strangers gather together at the corner public house and start guzzling robust pints of ale.

Your liver may disagree with that idea, but O'Shay's Irish Pub & Eatery in Coeur d'Alene is a great place to get totally sláinted.  Located directly on the last leg of the eastbound stretch of the Centennial Trail, over time O'Shay's has proved itself as one of few reasons to travel further east on Sherman Ave. than the old IGA for a maple bar and a juicy Chester Fried Chicken breast.
I'd really only hung out at O'Shays on one occasion a few years ago when I showed up to gather info for an article about St. Patrick's Day and ended up sticking around for the entire night listening to the excellent musicians at their always-lively open mic night and sharing probably too many toasts with the staff and regulars. It was an enjoyable evening for sure, in fact I enjoyed it so much I ended up devoting the entire article to the place, but I never had a chance that evening to dig into the food menu and sample their famous pub fare.


Jesi B. and I were having synchronized hunger pangs one recent rainy Sunday afternoon and decided to randomly drive in circles around town until an interesting place to eat popped out at us. O'Shays it was. We were greeted warmly like old friends and were immediately offered a frosty pint of our choice on the house.

We took them up on their offer, naturally, and crawled up into some tall chairs at a table near the front windows where we could casually observe the Lexuses (Lexi?) and Escalades pulling out of the parking lot fleabag hotel across the street, fresh from their surreptitious drug deals. Some days you just have to find the cheap entertainment where you can, I guess. 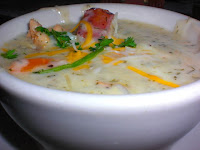 The atmosphere inside was warm and toasty, a feeling made all the better by our waitress Crystal's choice of background music - the "Wolfgang Amadeus Phoenix" album French Alternative Rock act Phoenix. Crystal commented that the bands music "just puts her in a good mood", and indeed the glossy, synthy pop lent a mood of cheerful languor to the partly-sunny Sunday afternoon calmness of the place.

Most evenings, live music is more often than not happening in the cozy front corner of O'Shays, where neon beer signs provide the ambient stage lighting and plenty of windows allow the action to emanate out into the consciousness of passersby on Lake Coeur d'Alene Drive.
Now that Willie's (former Eduardo's) is gone in a blaze of glory to Divey Nightclub Heaven (or more likely, Hell), O'Shay's is pretty much the only place remaining on the eastern end of Sherman Avenue where one can spend an evening getting sufficiently schnockered, going down on a decent home-style meal, and dancing a jig or two with a few new friends. Well, with the exception of the nearby Beehive Senior Assisted Living home, where "Bill Plays Keyboard" Tuesdays have been known to get pretty crunk and off the hizzy.
Dead Fiddlers Society, somewhat disappointingly, are not a coffee-klatch gang of violin-wielding zombies, but rather a fine group of local musicians who frequently churn out old-timey Irish tunes for O'Shay's regulars to tap their Birkenstock-clad toes to on the many weekend nights. Similarly, but perhaps with extra hairy-men-in-kilts-action is Deer Lake's traditional Celtic trio Rebel Tymes, who have also been known to give the nails in the ancient, creaky O'Shays floorboards quite a workout during their frequent appearances. .
Also, Thursdays are open mic night, and the pub has been known to attract a surprisingly low number of wannabes. The high caliber of musicians who've come through over the years have earned the night more longevity and respect than probably any other open microphone in town. O'Shays has an ongoing tradition of summertime events in their "O'Garden", an amphitheater style outdoor venue adjacent to the pub, and (potential spoiler alert) our own Miss Jesi has been asked to put together an upcoming event or two. Coming soon: the First Annual Get Out North Idaho Local Music Showcase (or something like that) at O'Shay's O'Garden. O'My! 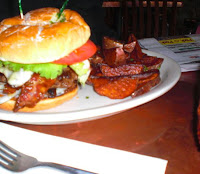 Jesi told me that O'Shay's famous Salmon Chowder had become a serious habit for her in the last few years, so she ordered a cup of it to accompany her Reuben Sandwich. Personally, I'm not much of a salmon lover or a chowderhead for that matter, but she raved about her soup, saying it was more delicious than ever. I did get to try a bite of her sandwich, and the house-made slow-roasted corned beef was totally melt-in-your-mouth fantastic.

As usual, I was craving a cheeseburger, so I asked for the O'Shays Burger, a loving, towering tribute to the both the beef and pork industries. It was actually supposed to include both bacon and ham, but Crystal informed me they'd run all out of ham. "I'll just have him put double the bacon on there", she said, and who could argue with double bacon (my cardiologist might, actually).

The ham wasn't missed - it was an amazing specimen of a burger regardless. Perfectly charbroiled and stacked with plenty of cheese and fresh topping, it was practically a workout to finish the thing. The kind of workout that's actually pleasurable and fun, like Zumba. The accompanying fries were quartered red potatoes, cooked to a deep brown color. Visually, they appeared slightly overdone but taste wise they were incredible with a crisp, rich outside layer and a steamy softness inside. Awesome.

As we were finishing our lunch, the owner's young son, a chatty redhead (from the same planet as me, I suspect),  was skipping by our table and we told him how great we thought his dad's food was. "I know, " he said. "He always makes it like that." Indeed.
Posted by Patrick Jacobs at 5:57 PM

If only they had any service. I tried to go there and walked out both times. Worst service ever. Why even go all the way there when all you find is no service and they are out of everything. Sad

Love O"Shay's. They make the BEST fish and chips!! Have always had great service there.

Also very much loved O'Shay's, we had great service and good conversation; would definitely recommend the Salmon Chowder.

Love the fish and chips but PLEASE do the Irish and Ireland a favor and change the word Eire to Éire in the sentence... "Sláinte!" Literally, it translates to "health", but somewhat ironically it's the word heard most commonly heard in the air back in olde Eire when friends and strangers gather together..... Eire translates to "burden" in the Irish language, Éire is the Irish word for Ireland. That little "accent" mark is called a fada and it's very important to us. Go raibh maith agat....(Thank you)

This blog is honestly beneficial concerning all educational understanding I earned. It covered a wonderful region of issue that may help some of needy humans. everything cited here is obvious and without a doubt beneficial. Buffet