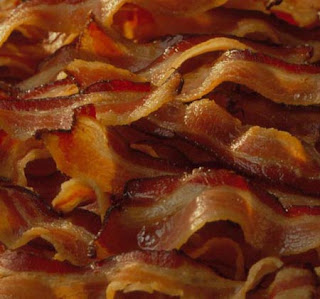 Sizzling strips of smoky, crispy bacon. I’ve never met anyone who doesn’t love it madly. Bacon is the great uniter of the food world, something everyone can agree upon from back woods hash house cooks to “Top Chef Masters” winners. It’s been known to make even the most devoted vegans fantasize and reconsider. Everything goes better with bacon, and right now “bacon mania” is sweeping the nation. Celebrity chef Bobby Flay is hawking memberships to his “Bacon of the Month Club.” Chocolate covered bacon is popping up everywhere from county fairs to high-end bistros.

Novelty shops are stocked with bacon-themed must-owns, including wallets, belts, band-aids and even bacon soap. This could explain why all the hip kids always smell like breakfast. Most intriguingly, a Seattle company has recently introduced Bakon Vodka, a potato vodka infused with the smoky flavor of peppered bacon, cleverly saving judicious drunks from the tiresome hassle of actually having to eat those foods. At this rate, we can expect to see a line of “Sizzling Hot” bacon lingerie at Victoria’s Secret just in time for the holidays.

It was a good old-fashioned yen for bacon that drove me into JB’s Family Restaurant recently on a sweltering late summer afternoon. We do have some mighty fine breakfast joints around, but few stay open long enough to cater to late-arriving bacon cravers such as myself, and none have the magic power that the JB’s cooks must use in their creation of the Perfect Strip. 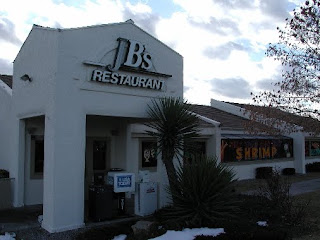 I first became acquainted with the Perfect Strip during trips through JB’s fantastic breakfast bar, which runs daily until 11 a.m. Stainless steel bins gleam under heat lamps, filled with plies of French toast, biscuits, gravy, scrambled eggs, a mysterious casserole, fresh fruit, cereal, and of course a tall mound of flavorful, perfectly cooked bacon. The place is always packed when the breakfast bar is rolling, and if they kept it open all day and into the night, it would probably still be buzzing with happy gluttons.

I’d probably have gone for that option if they hadn’t already converted it into a salad bar for the night. I needed to dive into the glossy, colorful menu and make a choice. Nothing in the dinner section struck my fancy bacon-wise, although they do have a solid selection of comfort-style entrees such as Roasted Turkey and Stuffing, Yankee Pot Roast, Pork Chops and Barbecued Ribs, as well as a ton of pasta, seafood, and steak options all for incredibly checkbook-easy prices. Technically it was still lunchtime and they do offer a wonderful B.L.T., a Turkey-Bacon Melt, and a California Bacon Burger, all of which I’ve enjoyed on prior visits, but ultimately I still had breakfast on the brain.

My incredibly likeable waitress Jenny brought my lemonade and asked for my order. With so many bacon-positive possibilities, I was indecisive. On a whim I decided to go for the gusto. “I’ll have the Stuffed French Toast with bacon and scrambled eggs and bacon.” While I waited, I thought about how JB’s is the kind of place we tend to take for granted and don’t give enough respect to. It’s not high on the totem pole of family restaurant chains, but their food always been consistently fine. The ladies of JB’s have always provided great service and on some visits have been quite entertaining with their gossipy inter-staff banter. There’s something comforting about the low ceilings, the dim lit corners, and the way they blend a vague Hawaiian theme with the obligatory “country living” décor. 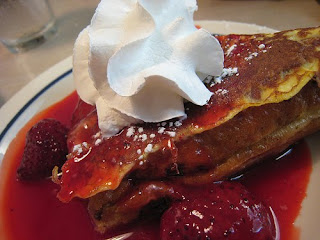 Jenny arrived with my steaming hot breakfast, saying “I’m so sorry, seems like that took forever.” It really hadn’t, and even if it had it would’ve been worth the wait. The French toast was amazing, oozing with a sweet cream cheese filling and covered in a warm, chunky strawberry sauce, topped with copious amounts of whipped cream. It was like dessert for breakfast for lunch. The scrambled eggs were formed into a large, fluffy square and were certainly fine, but they definitely took second billing to the gorgeous examples of the Perfect Strip they shared the stage with.

The menu had promised three strips of the good stuff, but my plate arrived with four. No one loves soggy bacon, yet too many places just don’t seem to care. JB’s does care, and they serve long, stiff, hearty strips cooked just to the edge of burnt, lending it a savory, satisfying smokiness. The whole meal hit the spot with a divine intensity and put me in such a contented, happy state that when Jenny arrived to clear my plate I had to resist the urge to give her a big hug. Perhaps the gift of some bacon refrigerator magnets would be more appropriate.
Posted by Patrick Jacobs at 12:01 AM