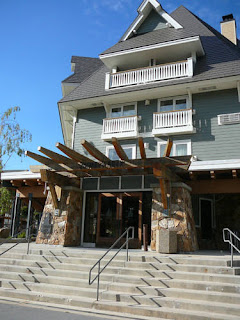 How much hard-earned cash would you reasonably want to spend on a steak sandwich? Let’s say you were dining at a charming alpine ski lodge which touts itself as “quickly rising in the ranks of the nation’s top destination resorts” and having a “passion for the mountains, infectious zest for life, and top-notch service”, how much is a pile of sliced beef with a little cheese on a roll ultimately worth, especially when served with a side of apathy and inattentiveness?

Perhaps Schweitzer Mountain’s only “fine dining” establishment, the Chimney Rock Grill was just dealing with a busier-than-expected lunch rush with the resort’s annual Fall Music & Microbrew Fest happening in the courtyard outside. Three friends and I made the trek up to check out a performance by Hailey, Idaho’s indie rock act Finn Riggins, and just as our ears started popping on the way up the winding mountain road, our tummies began to moan and groan. The first order of the afternoon became to find someplace to make them shut up.

Although there were a few food tents in action as part of the festival, it was pouring rain and bone chilly, so we ducked into the Chimney Rock Grill to enjoy the warmth of the fireplace and watch the performance of the kilt-clad Albeni Falls Pipe and Drum Band through the window, albeit silently. It’s a cozy, comfortable place, with all the décor and accoutrements one would expect from a classic ski lodge; stone-and-mortar fireplaces, chunky wooden eaves, and tables constructed out of barrels and what appeared to be large, sanded-down saw blades. 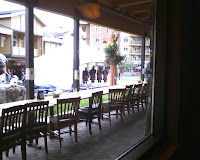 “Today’s special is the delicious Flank Steak Sandwich with Gorgonzola” advised our server as she paused to catch her breath and hand us our menus. We quickly surveyed the minimal selection of offerings, nine possible items in total plus a handful of appetizers; a burger, fish and chips, a top sirloin, a pork chop, linguine with clam sauce. The prices were as lofty as the mountain itself, ranging from a $12 hamburger to a $22 plate of mushroom ravioli, but we were fast approaching death by hunger and were quite willing to pay a reasonable amount, assuming that we would be getting something truly fabulous in return.

Two friends decided to split a Ham and Turkey Melt, another decided to go for the stuffed mushroom appetizer, and I opted to give the daily special a whirl. The minutes ticked by slowly as we watched the pipe band take a bow and Finn Riggins began to carry their equipment on stage. Not wanting to miss the start of the performance, anxiety really began to set in when the band was completely set up and ready to go, and our food still hadn’t arrived.

Finally, our server returned with the goods and we immediately realized that everything was room temperature at best. My friends’ Ham and Turkey Melt wasn’t really a “melt” anymore, and oddly, came with the toasted side of the bread roll facing out, as if they’d stuck it together backwards.

My steak sandwich might have been better if it had arrived hot, but regardless, it wasn’t anything to phone Aunt Joan about. The steak was tough and dry, cut into strips that were too large to tangle with, and the gorgonzola cheese crumbles were miniscule and had dissolved into oblivion at some point in time, back when the sandwich was still fresh. It was served on a plain, store bought hoagie roll, and we had to eventually get up and hunt down our server to ask for a side of mayo, which still didn’t do much to bring the poor sandwich to life. 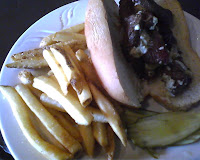 I ended up picking the steak chunks out and eating them by themselves, and liberated from the tyranny of the spongy roll, they weren’t too bad. The accompanying lightly herbed fries were cold but still somewhat tasty and left me wishing there had been more than a wee handful of them on my plate. The highlight ended up being the stuffed mushrooms, which were braised in butter and included a rich, flavorful combination of bacon, parmesan, and shallots and was served with garlicky mini-baguette slices.

I’ll admit it’s my own fault for not asking how much my unremarkable “daily special” was going to run me when I ordered it, but when our bill arrived with a $14 price point next to it, my spleen definitely tilted a bit. “Meh, typical resort prices I guess” my fellow lunch goers said dismissively, but a few minutes later as we stood in the pouring rain and listened to the band’s opening notes, I couldn’t help but feel a little bewildered, unsatisfied, and all wet in more ways than one.
Posted by Patrick Jacobs at 11:56 AM