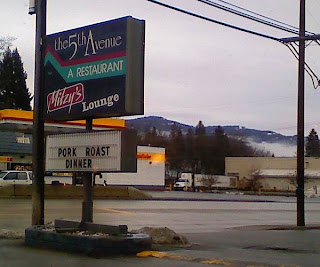 If Kurt Cobain had gone into writing teen novellas instead of angst-filled grunge rock, he might have come up with some of the things the guy at the next table was saying. “Girls really hate me, especially my moustache, they think it’s so ugly,” he announced to his lady friend and anyone else within earshot. He continued on, without a hint of irony in his voice, “That’s why I grew it, I guess. It’s a symbol of how I’ve decided to abandon all hope.” My lunch partner and I snickered and rolled our eyes in unison.
A few moments later, my phone beeped. My friend had quickly composed a text message: “How do you like the ‘Douchebag Diaries’ back here?” The young man possessed a deep, resonant voice, and from behind the large potted plant that separated his booth from ours, we heard pieces of his pitiful story; his failed fame-seeking move to New York, his endless series of miserable relationships, his subsequent case of dime store depression. His self-depreciating manner was cute and all, but we quickly concluded it was mainly a ploy to win a pity party and hopefully another date with the poor girl sitting across the table.
It did provide some cringe-worthy entertainment to enjoy over our lazy Sunday afternoon lunch at the Fifth Avenue Restaurant in Sandpoint. The place was sparsely populated, just us, them, and a table full of seniors coughing so hard w
e were sure an ambulance would come screaming up at any moment.

We spotted the Fifth Avenue just passing by, pulled in by the kitschy possibilities of any place named Mitzy’s Lounge. On our way in, I poked my head into the bar area and found it surprisingly warm and inviting, dimly lit and
centered around a circular fireplace, with only a few harried housewives enjoying a mid-day whiskey neat or two. 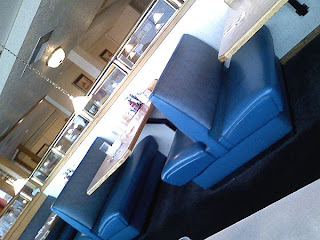 Tempting, but even for us it was a little too early for the cocktail hour, so we opted to take one of the booths in the restaurant area instead. The ambience is 1986 Country Living, the brass-and-glass, ruffled valance, church-chair blue and shredded-wheat beige motif that was once the rage for family-style restaurants. Unexplainably, it does kind of work, and the place is clean, bright and comfortable.

We were told to sit wherever, and if only we’d known about our future neighbor, we might have chosen a well-hidden corner instead. Our tired brains were already scrambled enough by the enormous menu when Mr. New York and his
date took their seat, making it even more difficult to concentrate on a lunch decision.

The Fifth Avenue menu is all-encompassing, offering dozens of classic diner-style staples like omelets, burgers, sandwiches, salads, pasta dishes, steaks, even liver and onions. Their ongoing special is called “Dine Around Sandpoint”, and includes battered mushrooms, a green salad, chicken or veal parmesan, and a slice of carrot cake all for fifteen bucks. I was excited to see the egg, ground beef and spinach scramble known as Joe’s Special on the menu, a rarity that’s one of my all-time favorites. Nice idea, but that just wasn’t going to hit the spot.

“The bacon here is so dank,” I overheard our neighbor dude tell his friend. “I know a guy in the kitchen and they make a ton of it and it sits all day under the heat lamp and gets all crispy and good.” I do have quite a weakness for all-day bacon so my eyes immediately started scanning for some. They finally landed on the Chicken Swiss Avocado Bacon sandwich, a line up that has to be the best foursome since U2. My friend never tires of breakfast, so he went for the gusto and ordered the Huckleberry French Toast. 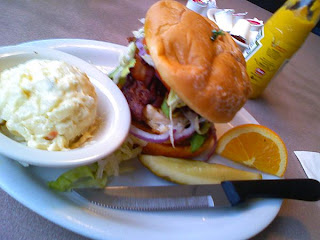 Our waitress was very attentive and down-to-earth and gets bonus points for her brave choice of lime green eye shadow. She returned with our meals in only as long as it took to hear a few
short chapters of Mr. New York’s tragic tale. His yammering fell into the background as I bit into what may be the best chicken sandwich I’ve ever encountered.

Our guy was right about the bacon, it was truly intense. The sandwich was piled high with it, along with lettuce shreds, avocado slices, and a thick tomato slab. The bun had been rendered perfect by a brushing of butter and was grilled to a delicate crispiness. I had to dig around under huge clouds of whipped cream and huckleberry sauce to steal a few bites of my friends French toast, but it was worth the effort. It was so delish that if I wasn’t already full, I would’ve had a half-order for dessert.

Having had our share of good food and bad angst, we rolled out of the Fifth Avenue feeling as if we’d stumbled upon an under-acknowledged treasure and vowed to revisit soon to tell Mitzy how her name led us to discover greatness.
Posted by Patrick Jacobs at 9:16 PM

Three if us ate there yesterday for breakfast after having to skip eating on Friday due to work, meetings, volunteering. Needless to say sausage, eggs and pancake were on order. The service was great, friendly and don't let your coffee go to half a cup. However, I am calling to get our money back from the three breakfasts we ordered to pay for medicine now to heal us. I literally have been up all night with severe stomach cramps and diarrhea. Our friend tha met us there and bought her breakfast. Was the first to get ill and called us saying she had her breakfast go right through her!!!! It is dirty in there after REALLY looking around. The cook had scabs on his arms and kept staring out at us as well.
I have lived in Sandooint for 30 plus years and WILL NEVER GO BACK. And now I know why it's been bout 4 or 5 years since I had been there.
Gross food that WILL MAKE YOU SICK and service that was so good I wish it was that good at other restaurants.

I am really impressed with your writing skills as well as with the format to your blog. Is this a paid topic or did you modify it yourself? Either way keep up the excellent high quality writing, it is rare to peer a nice weblog like this one these days..