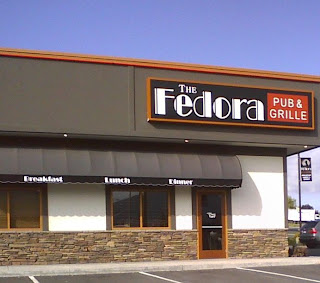 For many people, the mention of a Fedora-style hat brings to mind images of Gene Kelly singing in the rain or a moody Humphrey Bogart gazing into the eyes of Ingrid Bergman in “Casablanca”. I may be hopelessly lost in the ‘80s, but when I think “Fedora”, I immediately picture Duran Duran’s Simon Le Bon tearing his way through the jungle in the music video for “Hungry Like The Wolf”.

While the latter idea would most likely provide some interesting inspiration for the theme and décor of an eating establishment, it’s the golden era of the ‘20s and ‘30s which gives Coeur d’Alene’s newly opened Fedora Pub and Grill its ambience. Fedora owner Donita Mattern has done away with the dreary, wide open cafeteria vibe of former tenant Wangner’s Hofbrau, and created a far more classy and intimate, dim-lit space with forest green booths, faux-mahogany paneling and tinted glass room dividers.

In a clever local twist on the good-old-days theme, Fedora’s walls are decorated with enlarged, canvas-mounted photographs and postcards of Coeur d’Alene’s distant past. I’m kind of a collector nerd for that kind of crusty, old local ephemera, and I thought their appearance was a memorable touch.

The pub area of the restaurant, housing an abundance of Northwest wines and nearly twenty different microbrews, has been remodeled into its own enclosed space, and its lanky wooden bar, lounge sofas and shadowy corners are nearly enough to make you feel comfortably trapped in an old film noir sequence, minus the haze of cigarettes. 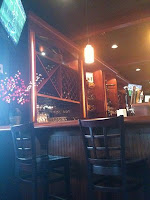 Open for slightly over a month, the Fedora’s positive word-of-mouth seems to have people already scrambling to check it out. “I have been there three times already and have not been disappointed...the service, the food, the whole new look. Great job” wrote one new convert on Fedora’s Facebook page. Another fan gushed “Yes! You have amazing food!” Perhaps the owners bribed people with free Guinness to sprinkle the internet with their glowing reviews, but it obviously worked because my first attempt to investigate the place was thwarted by a mad sea of cars congesting their parking lot which made me say “too crowded, another time.”

Returning on a week day during a mid-morning lull, I was greeted at the door by a smiling member of Fedora’s friendly staff and was given the choice of either a table near the TV showing old movies or a booth near the TV showing sports. I do prefer old movies, but I wanted a booth so sports it was. I wasn’t paying attention anyway, too caught up in deciding what to choose to satisfy my breakfast yen.

Mattern and her head chef, Brad Case, have created a strictly-from-scratch menu that tackles all three meals with a creative originality that sets it well above the usual blah family restaurant fare while still retaining a sense of the familiar. Steaks and pasta dishes make up the top end of the menu, but perhaps most excitingly, Monte Cristo cultists can add another haunt to the short list of local eateries that feature the beloved battered and deep-fried sandwich. The Portobello and Brie Sandwich on Foccacia bread is sure to cause one’s umami receptors to shudder with joy, and Gourmet Cheese Burger goes French by smearing on a thick, creamy layer of garlic herbed Boursin.

The Steamer Clams with a garlic-herb butter, red chili flake and chardonnay sauce would make for a luscious appetizer or a full meal, as would the Texas Chicken Eggrolls with Thai chili sauce and sour cream, and the Green Bluff Peach Salad (grilled chicken, peaches, candied walnuts, brie cheese and fresh greens in a vinaigrette) is described as “just what you need to imagine yourself dining on a big front porch on a hot summer night”. Indeed. 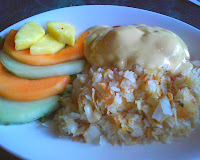 For a cool autumn morning, breakfast was the active plan, and after a bit of deliberation, I ordered their Eggs Benedict. It took exactly enough time for my exceedingly affable server Suzi to refill my coffee cup once before my food arrived, and with its colorful garnish of cantaloupe, casaba melon, and pineapple slices, it was a cheerful sight to behold.

Normally, runny eggs freak me out, but as my fork made its way through the layers of homemade hollandaise, thin-sliced ham and toasted English muffin, an explosion of bright yellow yolk came flowing out. Once said fork brought the concoction to my salivating tongue, any runny egg paranoia drifted away in a cloud of rich, dreamy flavor. The accompanying hash browns were unique, a mound of small, thin-sliced potato chunks cooked to a light, hearty crunchiness and not swimming in grease.

Despite the hype, I’d wondered whether the Fedora could thrive in such a relatively out-of-the-way location where another restaurant had already died a slow, painful death after only a little over a year. After experiencing their impressively high level of service and sampling their singular cuisine, the reason for the buzz is clear. The Fedora is poised to become one of the area’s signature dining destinations.
Posted by Patrick Jacobs at 1:00 AM

Great food, nice place to have a quite dinner, service great, location ??? why?? I like Fedora very much I will be a regular. Try it you will be happy you did.

Had lunch at Fedora on Saturday. Although my lunch was yummy, the heavy pink lipstick on my water glass was icky, really icky.

My wife's prime rib sliders were practically inedible. The home made rolls may have been one or two weeks old - super stale. At home, I'd be embarrassed to serve prime rib like that to family or guests.

The service was OK, neither good or bad.