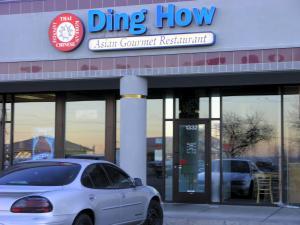 "You do not sew with a fork, and I see no reason why you should eat with knitting needles." ~ Miss Piggy on Chinese food and Chopsticks, 1981.

Killing time twenty minutes waiting for Ding How’s 4 p.m. dinnertime opening, we wandered past the fanciest and emptiest Pizza Hut we’d ever seen, past the hollow corpse of a failed smoothie shop, past a group of bored Korean girls mindlessly snacking and gossiping inside a dead nail salon, and finally decided that the state liquor store seemed like the most appealing place to loiter in front of. Alas, there weren’t even any interesting drunks dropping by, so it came as relief both to our bored minds and our grumbling stomachs when we finally noticed Ding How’s door shimmy open.

With its location in a cookie-cutter suburban strip mall, it’s a little startling to walk into a restaurant with such a welcoming, nouveau-urban vibe. A maximum seating capacity of 36 doesn’t allow much room for folk dancing, but Ding How’s intimacy lends to its hidden gem appeal. Backlit cobalt blue panels glow across the walls and ceiling, low-slung white geometric paper globe lamps hang over modern, dark wooden tables, and lush, braided bamboo plants create a strikingly unique and comfortable dining environment.

Ding How isn’t content to fiddle around with merely one stop on the Orient Express, in fact their menu is so massive and all-encompassing, my lunch partner and I were nearly overwhelmed with a crisis of decision. Traditional Chinese fare, representing both Szechuan and Mongolian cuisine, makes up the bulk of the items offered, but sushi and a selection of Japanese favorites, a dozen Thai dishes, and a handful of Korean specialties show up for the Asian Unity banquet as well.

Chinese-wise, notable entries include “Sizzling Happy Family”, which may sound like a description of your mother’s house on Christmas Eve after a few rounds of rum punch, but it’s actually a gigantic stir-fry with veggies, shrimp, scallops, squid crab meat, and chicken. “Tangerine Beef” suggests savory, chewy sunshine, the “Honey Walnut Prawns” could work as dessert-for-dinner, and “Ma Po Tofu” (hot spicy bean curd with ground beef)’ is what a vegetarian says when she realizes there’s hamburger disgracing her plate of coagulated soy milk chunks. 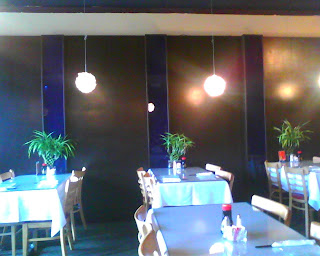 Tempura Chicken, Tonkatsu Pork, and yakisoba round up the Japanese segment of our menu tour, and after a brief layover in Korea (Kal-Bi Short Ribs, Spicy Squid) we jet off to Thailand, where a variety of curry dishes (Green, Red, Yellow, Mussaman) entice and Chicken Pad Thai beckons with its noodly appendages.

We would’ve booked a couple of tickets for Ding How’s complete Asian getaway package, but alas, neither one of us had brought a sufficient amount of cash, so our waitress made arrangements for two Chinese dinner combos and a California roll appetizer. She was bright, friendly and youthful, counteracting the two chefs hovering behind the open kitchen window, who both looked like they could probably tell first-hand stories about the fall of the Qing Dynasty.

Things started off most impressively with the egg flower soup, wonderfully drizzled with sesame oil, which along with crunchy (not soggy) cabbage strips and carrots we could actually taste, added up to something amazing indeed. When our California roll arrived, I realized that I’d inadvertently asked for the hand roll instead of the cut roll. It was big and a little unwieldy, resembling a crab-stuffed seaweed waffle cone. We passed it back and forth taking bites, but neither one of us ended up very much in love with its excessively gloppy crab salad and slightly tough and chewy nori. 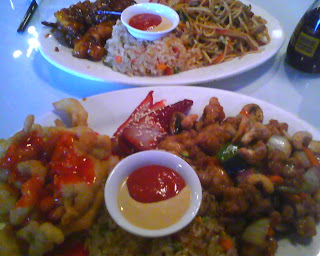 Our dinner combos arrived sadly less-than-hot and with the little hot mustard dishes stuck awkwardly right atop our piles of rice. My sweet-and-sour chicken was adequate taste-wise but odd; a sticky pink glaze minimally dribbled over abnormally shaped pieces. A rubbery texture made my Cashew Nut Chicken a bit of a bummer, although the sauce had a fine, spicy flavor and the veggies were passably crisp. My friend’s General Tso’s Chicken was quite good, but we both thought our fried rice had a slight burnt-oil edge, and our servings of BBQ pork were best described as wee.

We left in a satisfactorily full state but still managed to have enough leftovers between us to overstuff a single Styrofoam to-go box. It’s kind of telling that when I dropped my lunch partner off at home, we had trouble deciding who wanted to end up stuck with it.
Posted by Patrick Jacobs at 1:00 AM