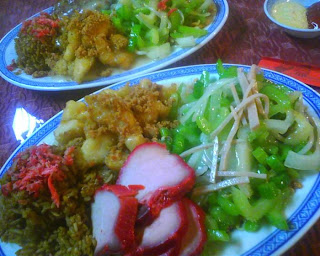 Take a nice, long gander at this kaleidoscopically colorful, mouthwatering picture posted to the left. I didn't use any fancy cameras or do any photoshop doo-hickery on it, I just captured the image with my plain old un-smart phone. But look! It glows like an abstract impressionist painting, the geometric shapes, the sense of balance, the serene blue ovals that surround the platters.

It could be a mirror image, but these are actually two slightly different dinner combos that landed on the table in front of Brett and I on a rainy and spontaneous Sunday road trip to the northernmost parts of Sandpoint. We'd been up carrying on out on the town until the wee bitching hours the night before, and sometimes the dank intensity of a a Chinese lunch is the only cure for a case of the day-after hazies.

I had a vision of it in my head, I couldn't remember the name of the little red boxy Chinese place that had caught my peripheral vision a few times over the years as I'd gone speeding through Ponderay, ID on my way to nowhere in particular. It was a frustratingly gloomy Father's Day, the last leg of an entire frustratingly gloomy Car d'Alene weekend, and it seemed like a mini-vacation was a good way to shake the blehs away, so off we went.

It worked. Once 95 emerges from the hell pit of Athol, the drive starts to become absolutely gorgeous, even on a drizzly overcast day, when clouds hang low over juicy green valleys and there's nothing but flora and fauna and a series of Steinbeck-y farms, each decorated with approximately six broke-down Subarus.

We were ravenous by the time we finally made our way into the red building, and we weren't particularly knocked out by the name Golden Dragon - so generic, we thought. There must be a Golden Dragon in every burg across this hungry nation, in fact there's one right here in Post Falls. Brett asked our hostess if her place was related, and she said "Yes yes, we're all same family", which made us ponder the possibility that everyone at every Golden Dragon everywhere are all somehow related to each other. It's evidently quite a large family - a Google search for "Golden Dragon Restaurant" yields 2,570,000 results.

The interior of Ponderay's Golden Dragon was nothing to call HGTV about, what with the obligatory assortment of red paper lanterns, lurid Great Wall landscapes, and an ominous glass case full of Chinese trifles and whatnots. But overall it was a perfectly tidy and agreeable atmosphere, with the reassuring Mandarin (?) chatter of the two waitresses and cook (sisters and dad?) and some tinkly Asian elevator music providing an appetizingly authentic audio environment. 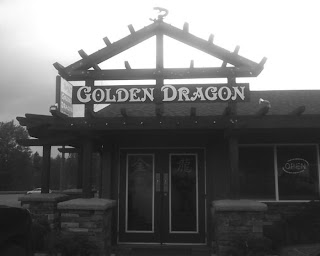 So was the food as good on the taste buds as it is on the eyeballs in the above photo? Generally speaking, yes it was. Golden Dragon is, in many ways,  a few notches above pretty much any Chinese food on offer anywhere in the Coeur d'Alene-Post Falls-Hayden triangle, but I still can't say it lives up to the best of the best Asian-American meals I've sat down to (locally, Spokane Valley's Peking Palace still holds that personal award).

But still, I'm finding it near impossible to find anything to really gripe and groan about. The Almond Chicken was definitely the highlight of the whole interlude, with a noticeable delicacy to the crispy breading, and a depth to the flavor of the gravy that places it a zither string or two above what normally comes toward me down the Great Almond Chicken Pipeline (don't we wish such a thing actually existed?).

The BBQ Pork slices were a bit on the overly tender side, but not totally undercooked and there was a freshness that came out in the taste of actual pork, leading me to believe they whip it up in-house rather than order it in pre-made. The veggies in the chow mein were youthful and crisp, also bringing the meal a touch above some places which serve chow mein that seems suspiciously like it's been sitting in a pot under a warming lamp since 10 am. The only thing that seemed a little weird was the fried rice, which was a mysterious brown color and contained rice and rice only with no veggies, fried egg bits or sprouts, and was a little on the bland side but not 100% un-tasty.

Brett ordered almost the same combo as me, but instead of the BBQ pork, his came with Egg Foo Young, which was formed into a perfect square, and according to him, was the best he had ever pushed down his quivering maw. I was able to clear most of my platter, he ended up asking for a to-go box only a few bites in.

Not that he didn't enjoy his food, in fact he was going off about it like it was the best Chinese meal east of Chinatown. He had actually already managed to fulfill his always-small appetite with the first and second courses - a cup of super yummy Hot-n-Sour Soup and a plate of habit-forming Crab Rangoon with a sweet, gelatinous plum sauce that by itself would have been worth the gas money spent on the entire adventure.

Am I too picky when it comes to Chinese restaurants? Perhaps I am, and Golden Dragon was as peachy keen as can be expected, especially for a nondescript little red roadhouse plopped next to a highway in rural North Idaho. But one of these years, I'm still hoping that I'll stumble across a classic Chinese eatery that will give me something to tell my great-grandchildren about. Well, tell my great-grandcats about anyway.
Posted by Patrick Jacobs at 8:00 AM

That's informative and helpful for us .It's related to the Sandpoint Idaho real estate.I read and really impressed from your topic. Its and intrusting and and wounder full article.Thanks for sharing .....