Sifting Through the Thrift Scene Deux

The last time I did a round-up of the local thrift scene, I ended up in a bit of hot water with a certain fine charitable organization. Among other things, I casually referred to some of the women who volunteer their time and energy at the Hospice Thrift Store on North 4th Street in Coeur d’Alene as being, well, let’s just say not-so-young and frequently less-than-cordial. The backlash included a series of angry emails, including one saying that my comments were “absolutely as disagreeable as your fat face” and also a letter to the editor of the Coeur d’Alene Press (wrong newspaper, but they printed it anyway) berating me for hassling those who care for the sick and dying while neglecting to note that I was actually referring solely to their thrift store. While I stood my ground saying it was merely an opinion piece, I still felt a wee twinge of guilt.

So there’s something I need to get out of the way before I go any further with today’s Get Out thrift update: I take back all my snarky comments about the Hospice store. I recently built up the nerve to revisit the place and found it to be much improved. The ladies who rang up my purchase were smiling and very friendly, and although I’d brought cash, I noticed they finally had installed a credit card reader, something I had scolded them about before. That day I found some wonderful ceramic Polynesian lady heads and a couple of old Motown records in pristine condition. All the outmoded, dust-gathering Betamax and 8-track players were gone, and they’ve got the biggest section of sewing and crafts gear I’ve ever seen in a second hand store. Cheers to store volunteers and management who’ve transformed this formerly low-ranking thrift stop into one of the best currently around.

A block south of the Hospice Store is the newly-relocated Thriftique, another contender for coolest thrift store in the region, from which all proceeds go to fund Lake City Community Church‘s global aid missions. Manager Scott Gittel and his crew seem a touch more selective in what they sell than some of the others. The front area of the store resembles a plush living room, with smoke-free household items and décor that actually conjures a sense of modernity and not painful memories of forgotten design eras. In other words, if you’re searching for macramé owls, floral nauga

hyde pillows or rust-shag mushroom stools, you might be out of luck. The floor here is made of a very bumpy stone tile which causes my shopping cart to loudly rattle my teeth and bones as I push it around the room, an effect I oddly enjoy. It’s organized but random at the same time, the way all good thrift shops should be, and it makes a perfect addition to the north end of Midtown.

Post Falls has had a spurt of new thrift shops open up in the last few years. The Goodwill on Seltice Way is only about a third of the size of its Coeur d’Alene counterpart, but manages to boil things down to the necessary essentials in a refreshing way. Clothing wise, Goodwill stores seem to have a knack for filtering out anything that’s not at least vaguely hip and they carry a lot of like-new designer-name items at fashionably reasonable prices. I’ve always had good luck with finding really great weird stuff here. An ashtray with a cartoon of a frowning, grizzled smoker rasping the words “Smoking is Glamorous”; a gaudy framed print by 60’s mass-market art legend Vladimir Tretchikoff; a coffee-table book of Jim and Tammy Faye Bakker; an autographed t-shirt of Jimmy “JJ” Walker signed “to Pookie.” Either I leave here completely mind-blown by my big thrift coup or I walk away empty handed; it just depends on the mood of the fickle Gods of Thrift. 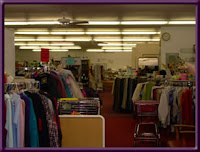 They rarely smile down on me at the Post Falls Thrift Center, which recently changed charities from the Senior Center to TESH. The store itself remains unchanged, still over-cluttered with faded flannel fashions, grungy 70’s furniture and Avon knick knacks. The book section always looks like a bomb went off and they’ve got all their records shoved in tight racks near the bottom shelf. One has to be a very devoted vinyl hound to spread out on the dirty floor and browse, and I do it despite the occasional odd look. It was at this store I became forever paranoid about buying used pots and pans after a wide-eyed woman accosted me one day as I placed a perfectly fine looking frying pan in my shopping cart. “Oh no!” she huffed, “You can’t buy that one. It’s got aluminum in it; you’ll get Alzheimer’s disease!” She proceeded to dig through the shelves and point out to me all the various health hazards associated with each item, making me wonder if it was really her tinfoil hat creating all the problems.

The Kootenai Humane Society has recently opened a new shop across Seltice Way from the Trading Co. grocery store. It was still pretty sparse when I visited but it has the potential to live up to the high standard set by it’s Coeur d’Alene sister shop, a store which continually wins my award for best book department. A few doors down in the same strip mall is the Real Life Church Thrift Store, where I can’t recall ever buying anything, although it’s worth a visit just to see the Museum of Laughably Dated Technology they host in the back room. If you’re still way into Windows 95, this is the place for you. 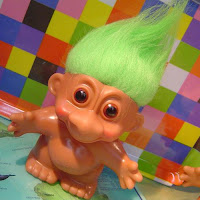 With the economy shriveled up like a fig in a fruitcake, there’s never been a better time to consider the idea of stretching your Christmas shopping budget by investigating the thriving local thrift scene. Not only can you find some unique, retro holiday décor, but if you’ve got a good eye, you can find items for under the tree as well. While you might want to avoid buying your loved ones used underwear or pink shag toilet rugs, lightly used books can actually be some of the best thrift gift items you can find. If they’re in nice, cherry condition, no one would ever be the wiser that you paid only a buck for that Rachael Ray cookbook or Matisse coffee table tome. Whether the collector on your list is into Coca-Cola crap, Elvis kitsch or troll dolls, searching the funky clutter of our local thrift shops for the perfect present could even leave you with a few dollars left over for a that polyester disco outfit you found at St.Vinny’s. It’ll be the perfect thing to wear to the party on New Years Eve.
Posted by OrangeTV at 12:01 AM

I am amazed at the variety of thrift stores in the CdA/Post Falls area. Thanks for the new list of ones I didn't visit in August. The troll doll picture brought back great memories!!