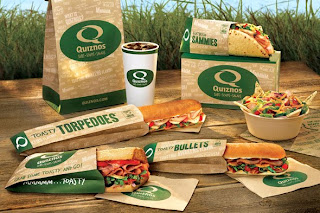 "I always thought marketing in general was an interesting kind of thing. I always liked commercials and billboards." ~ Carrot Top

I briefly studied basic marketing concepts in college, and I’ve been ultra-aware of various consumer appeal techniques ever since. “Quiznos has always been a little different,” read my soda cup full of Diet Mountain Dew, the momentary focus of my attention amidst a slightly chaotic lunch rush at the sandwich franchise down on the dark end of the Ironwood Square/Albertsons shopping center. “We boldly believe that your food should taste great,” it continued, “that we should use only the highest quality ingredients and that more than our lettuce should be green”.

I rolled the final phrase around in my head for a moment. It’s obviously an obligatory jump on the eco-friendly corporate bandwagon, and I’m all for Reduce Recycle Reuse, but could their bold belief in the notion of “being green” possibly also be a subtle grab towards supporters of the swiftly trending marijuana law reform campaign?

Probably not, but I’m sure most marketing people currently have the idea on their short list. Considering the munchie-attack overtones of the Quizno’s menu and the boldly Rastafarian red, gold, and green color scheme of their decor, one could be easily forgiven for considering the possibility. Their old TV campaigns alone, including ads depicting a man "raised by wolves" suckling at a mother wolf's teat, a very tipsy sounding talking Bob the Baby, and the high-pitched jingles of the wonky-eyed “Spongemonkeys”, are enough to make you wonder who’s been puffing what. 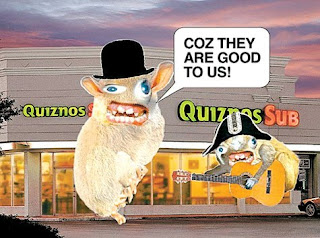 For a long time, their image was based primarily on being the only sandwich chain that offered a toasted product, an idea originally cooked up in a borrowed pizza oven at the flagship Quiznos in Denver in the late seventies and expanded into an international chain of over 4,000 stores. In the last several years, Subway, Blimpie and others have all rudely attempted to steal their toasty crown (to varying degrees of success), but none of them offer the minor thrill provided by that long, tunnel-like conveyer-belt oven which skillfully sends your sandwich on a magic journey from cold and blah to golden brown and melty-licious.

Perhaps in an attempt to woo customers back from style-biting competitors, Quiznos beefed up their menu not long ago, bringing in more non-toasted subs and adding a selection of affordable flatbread “Sammies”. Also recent on the Quinzos roster are the “Toasty Bullets” and the lengthier “Toasty Torpedos”. Is the use of weapons imagery is another subtle marketing attempt, this time towards gun rights advocates or war supporters? Unlikely I suppose, but at least pricewise, they do provide a lot of bang for your buck.

The staff at the Coeur d’Alene Quiznos has always seemed remarkably cool, collected and efficient, considering the long lines that tend to back up inside the tiny place, perhaps best described in polite terms as a big clusterfudge. Still, I’ve never had to wait long for my lunch to come down the last stretch of the mighty toaster oven. On past visits, I’ve stuck with a favorite of mine, the Prime Rib and Peppercorn, which I like to doctor up with horseradish sauce and banana peppers found on their wonderful serve-yourself peppers-and-condiments bar. Recently, I’ve managed to broaden my spectrum of Quiznos knowledge to also include soup, salad, “Sammies”, and their somewhat intense Steakhouse Dip. 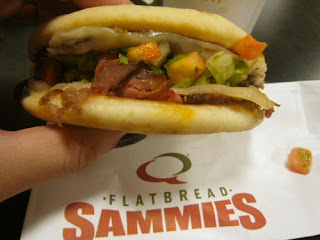 The latter was, for me at least, a completely messy affair. A couple of friends walked into the place and approached me mid-bite, as I dropped roast beef chunks all over my lap and dribbled Au Jus down my arm and onto my shirt. It’s a little awkward to attempt small talk with strings of melted Swiss dangling off one’s goatee, but the slight embarrassment was worth it. The sandwich was memorably savory and rich. The accompanying Broccoli Cheese soup needed a little assistance from old Lady Salt and Sir Pepper, but it was hot and steamy and seemed freshly made.

On my return a few days later, the Smoky Chipotle Turkey “Sammie” was a little small and not as kicky as the name might imply, but made passable due to Quiznos addictively warm, soft flatbread. It’s terrific stuff, like a moister, meatier pita, and provides a nice option for those looking for something inexpensive (under $3), and relatively stingy on the fat (4 grams).

Quiznos has always set about presenting themselves as different from the rest of the franchise food pack, and for the most part they succeed. Market groups and target demographics aside, Quiznos appeals most to everyone involved in having a salivating mouth and a growling, hungry tummy.
Posted by Patrick Jacobs at 11:43 PM