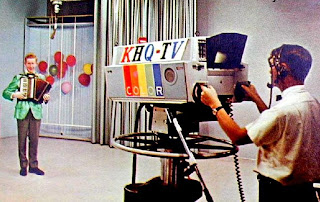 For some geeky, bizarre reason, one of my favorite weekly rituals is sleeping in a bit on Saturdays (which for me lately is until about 7 a.m.), then tuning into Channel 6 for KHQ's 3-hour morining amateur news blab-fest.

First of all, love goes to whoever DJs and selects the tracks to broadcast during the transitions to commercial breaks. (Update: Ana just thanked Blake in the sound booth for the music.) Today so far, I've heard David Bowie's "The Man Who Sold the World", The Cure's "A Forest", and "Black Dog" by Led Zeppelin among other slightly off-base non-hits that are just perfect for today's gloomy mood and overcast skies. They always seem to perfectly match the mood of the weather with their picks for inbetween-tunes. "Walking on Sunshine" or "Here Comes the Sun" are always sunny-day favorites, for example.

Also, they manage to dig up some terribly interesting local musicians for in-studio live performances. Last weekend was the Tropical Pengiuns, a Brady-esque group of teenage sisters and brothers who said they named themselves in tribute to their favorite band, UK act the Arctic Monkeys. They actually sounded pretty good. Today, Q6 audiences were treated to the pleasure of Too Many Men, six rather butch looking women in hockey gear playing a shaky-guitar, lyrically altered version of "Ice Ice Baby." Actually, every song they performed was a cover with the lyrics changed to a hockey theme. Too Many Men played their instruments with all the skill and prowess of a band that's been together since March. Raw and delightful.

Hostess Ana Cabrera is my favorite news gal ever. She's pretty, down-to-earth and sincere, not overly made up and scattery like Sunshine Shelly or uberdetached like Concerned-Eyebrow Queen Stephanie Vigil. She likes to make little dorky jokes, little comments on the music. She's somebody you'd want to hang out with anyway, mix up some International Delights coffee, stretch out on the couch and paint each other's toenails while catching up on the week's news and gossip. Lately her foil has been Tom Durian, who I do like in kind of a mellow, Eeyore sort of way, but I miss the jazz and high energy of her usual co-host Sean Owsley. Sean, Sean, where have you gone?

Q6 must save Saturday morning for the rookie crew, the interns, and the fuck-ups. Cameras point at the wrong host, cues are missed, audio drops in and out, people walk by right in front of the action. It can be chaotic, but that's what's so entertaining about it. You never know for sure what insane thing might occur. Ana might be out on the street interviewing a homeless poodle or the Tomato Lady and suddenly, the camera will cut to the weather girl at her desk with a pastry in her mouth and a look of shock as soon as she realizes she's accidentally on TV. Oops, wrong button!

I also like the Happy Birthday rundown, the amateur photos of flowers that people send in, the endless camera shots of I90 traffic, the long-winded chats with representatives from whatever charity or animal shelter. Also, most of the news stories they show are just re-runs and re-caps of the last week, so it's a great way to catch up on local stories you might have missed the first go-round. Like a strange dream, it's all over at 10 a.m., just when I'm starting to get sick of TV and ready for the next weekly ritual, the Thrift Store circuit.
Posted by OrangeTV at 9:12 AM

Email ThisBlogThis!Share to TwitterShare to FacebookShare to Pinterest
Labels: I Heart, Local TV

I decided not to watch the news never again; they only serve to establish a massive hysteria... I don't know... my grandfather always said: "if you want to be depressed go and watch the news boy"!! if69

It is one of the best show in the history,I think so!!! the music of the show was really good, I do not remember the name of the band but I guess that they still play so well!