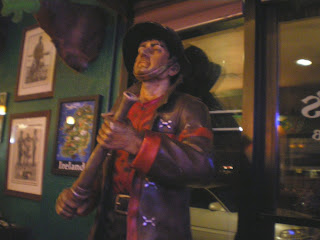 “When I die I want to decompose in a barrel of porter and have it served in all the pubs in Dublin.” ~ J. P. Donleavy

An Irish Pub without Guinness is like a discotheque without a DJ. “I’m so sorry, we can’t serve any beer or wine tonight”, apologized the waitress with a hint of exasperation when I walked into Kelly’s Irish Pub to meet the parental units for dinner. The draught drought was actually through no fault of their own; turns out they ran into a snare during the transfer of the beer and wine license, namely the fact that the county is notoriously slower than molasses when it comes to such matters.

More than likely, Kelly’s beer taps will be flowing by the time you read this, but their temporary dry spell was too much to handle for several groups of customers who walked in and did a 360 back out the door after being told of the dire alcohol situation. Too bad for them, for they missed an opportunity to indulge in some of the most spectacular pub food I’ve come across in recent memory if not ever.

Not everyone was fazed by the lack of booze. For a restaurant that had only been open a little over a week, the place was packed with hungry folks, some of them looking like they’d already dabbled in the Kelly’s experience before and had quickly decided to make it a regular haunt. Some of them may have been holdovers from the prior tenant, Grumpy’s, who transformed the former Laundromat of ill repute into a fine dining establishment only a little over a year ago.

There was no need for Kelly’s to do much remodeling, but the décor has changed quite a bit. It looks like the All Things Irish store exploded inside a firehouse, with clovers and leprechauns mingling with memoirs from owner Walter Keith’s years as a fireman back east, including a larger-than-life statue of a hose-wielding firefighter that greets customers at the door. 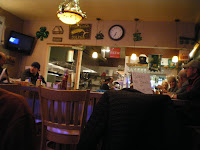 We were slightly baffled by the large folk-art placard that hangs above the bar with the rather gruesomely un-PC message “Fresh Catch – Dolphin”. Fortunately, dolphin and chips is not among the choices listed on the menu, but nearly everything that was on offer sounded terribly tasty to our rumbling tummies. Kelly’s offers a selection of traditional dinner items, including several fried seafood platters, New York strip steak, and pork loins with potatoes and veggies, but the main attraction is their selection of whimsically named sandwiches.

The “Blarney” is thin-sliced roast beef on sourdough with carmelized onions, horseradish sauce, and melted Swiss and American cheeses. The “Prime Minister” is positively Thatcher-esque in its grandiosity, with prime rib slices, onions and cheese on a hoagie roll and served with a side of rich au-jus. The “Philly” is exactly what it sounds like, and the meaty “Blue” brings together grilled chicken, honey ham, bacon and Swiss on a ciabattta roll. Also desirable and unique is the “Sligo”, which crosses thanksgiving with a summer picnic by mating smoked turkey, cranberry sauce, cole slaw, bacon and two melted cheeses on marbled rye.

Initially, we had the idea of each ordering something different so we could steal bites off each other’s plates. I really had my heart set on trying their signature Reuben sandwich, but my mother had already laid claim to it, so I narrowed it down to a few other options. The “three scoop salad” caught my attention right away with it’s trilogy of homemade chicken, tuna, and shrimp salads served on a bed of greens. The bacon cheddar burger was also howling my name, especially after the waitress sashayed by our table with several of the toweringly huge burgers in hand, but lately I’ve been a little cheeseburgered out. 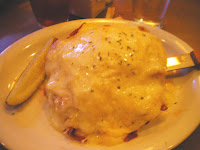 We had to ask the gentleman at the table next to us what the heck he had ordered after the waitress brought him a miniature mountain of meat covered in white gravy. When he told us it was their open face Rueben, and that it wasn’t gravy but masses of melted Swiss, all ideas about individuality drifted away. “Three Ruebens, please” we said, and our waitress returned amazingly quickly with three very hot, heaping plates of fabulosity.

I’m not a huge fan of rye bread, but I barely noticed its presence under the piles of tender homemade corned beef and sauerkraut. The dollop of 1000 island dressing that lurked under all that cheese was enough to send me straight into flavor heaven. Seriously, run don’t walk immediately to Kelly’s and try this divine sandwich yourself, as I’m quite unable to summon words flowery enough to describe its glory with any justice.

Our meals were so huge that all three of us made it only about halfway though before our full stomachs started waving the white flag of surrender. Still, it was impossible to say no to New York cheesecake, and we were glad we didn’t because it was incredible, light and fluffy like its supposed to be but rarely actually is. The service was fantastic as well, so much so that we almost expected them to offer to bring our cars around to the front door as we were leaving. Valet service or not, Guinness or not, I predict that Kelly’s Irish Pub will swiftly rise to the top of the list of local diners’ favorite destination eateries.
Posted by Patrick Jacobs at 12:00 AM

I absolutely agree. Started having lunch here the day after St. Patricks day, looking for some more corned beef. I tried there corned beef sandwich. Loved it. Came back the following day and tried their "Prime Minister". Absolutely fabulous. Love the food and the service. Highly recommend it.

This was by far one of the worst restaurants I have been in in a very long time, if for no other reason than the horribly rude owner, Walter. Walter was having a very loud conversation with another patron that was COMPLETELY inappropriate about how he was going to "get" any woman he wanted in the CDA area, and went into deep detail if you know what I mean.... This is really not something I want to listen to while trying to enjoy dinner with my husband. This type of situation is expected in a bar not a restaurant, I am young, I get it, but please, this went WAY too far. On top of it, the food was marginal. Dont waste your time...go across the street to Capones, the food is great and so are the people!!

I was in there with my friends and couldn't help but hear the swearing and with kids not out of earshot...kinds of classless.
Walter the owner doesn't mind making sport of his employees either while he himself is obviously a social train wreck! Clean it up Jersey boy.
Nobody wants to hear about your conquests or watch you spray your venom.

What a wonderful discovery. My wife and I have been driving by Kelly's for a couple of years, always between mealtimes, but getting more curious. Since my birthday is on St Patrick's Day, we decided to give it a try this year. Now I can't image that we'd ever go anywhere else! Great food and a very, very accommodating staff. Considering it was St Pat's day and you could barely walk through the place, the service was remarkably good.

From the CdA drum and bagpipe corp kicking off the evening with QUITE rousing versions of traditional music to the wonderful regulars singing Happy B'day to me (they never saw me before but treated me like one of their own). What a spectacularly welcoming clientele!

I had the outstanding corned beef sandwich and can't wait to come back for the meat loaf and the Rueben but am already torn after stealing a little of my wife's fish and chips, the best I've had in a log time.

Prices were just right, too. How often can you say that? Can you tell we loved this place? I can't wait to go back. Maybe I will today!

The prices in this pub are accessible and they have a great variety of drink, nice spot! Kelly did a great job.

This was our favorite for fish and chips and reuben Sandwiches. the last 2 times we were there we walked out before ordering because it was as hot or hotter than outside. Why would anyone want to eat out in 90 degree weather without ac. I haven't given up on them yet but I guess we'll have to wait till it cools down. That has to have cost them a lot of business

The food is insane been there 3 times so far and its great.

maybe one day will hit on an event night