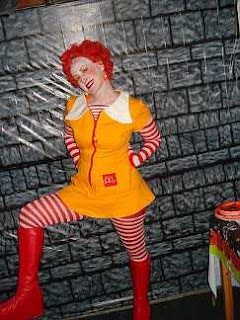 McDonald’s really is the perfect sexy bitch, a red and yellow pleather clad, Sharpie-browed dominatrix-for-hire whose loving abuse is a product for which you will happily pay, despite any moral protestations. That old queen Ronald McDonald himself seems to feign some form of retro innocence but still he continues to scare children to death with his detached gaze and he is slowly but surely destroying everyone’s lives from the inside out.

Ronald fronts like a benevolent, fire-haired Rihanna wannabe working the corner on fast food row, all glitter and dazzle, prancing around in a soft-focus orange glow, but we all basically suspect that despite the euphoric smile and eye-candy quotient, something much darker and much sluttier lurks behind her come-hitherings.

Her peerless omnipresence corrupts every other major street in every town everywhere, her skull-crushing media barrage is sublime and eternal, and her continuous unavoidable brainwash has children from Chi-town to China speaking “happy meal” as their first words. Lady McDonald’s food source mysteries, management methods, and mind-blowing ability to exactly replicate every food product they offer in each one of their 31,000 stores have turned nearly every global industry upside down several times, and not really in a tickly, giggly sort of way.

I’ve watched the fat boy documentaries. I’ve seen the corporate flim-flammery that surrounds the fast food industry in general and basically, everything is wrong wrong wrong. Saline-bloated chickens raised in boxes not much bigger than the package my mother’s bottle of “White Diamonds” by Elizabeth Taylor comes in, cows that eat corn (a food not meant for cows) until they puke and die from malnourishment, and potatoes produced by farmers under duress, victims of McDonald’s mafia-like overlording. The cherry on the hot fudge sundae is their notoriously shifty, heavy-handed handling of their mostly adolescent or geriatric workforce.

Still, time and again we always eventually manage to end up in some middle-of-nowheresville ghetto suburban McDonald’s situation. A visit can happen sometimes seemingly by complete accident, maybe during a flash of nostalgia or possibly desperation. While there are McDonald’s outlets literally everywhere crusting the planet, Americans especially are notorious for so mindlessly chewing on the dirty Micky D’s marketing sponge, an object which some would say has a similar flavor and texture as the food they pump out. Tastes like bleh.

But confess! Despite strong evidence that what MacDonald’s serves has a longer half-life than Keith Richards’ liver and that one of their cheeseburgers isn’t planning on sticking around Hotel Duodenum but just passing by, for many people their food isn’t without its occasional allure. 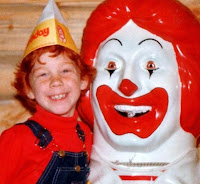 Like many others who grew up in the TV '70s and beyond, too much of my childhood was spent at the local McDonald’s store (I even had birthday parties in the urine scented log cabin that used to be in front of the Coeur d'Alene store - see left photo), but the visits have become more and more infrequent over the years. Really, I was over it for the most part in my late teens and haven't had a craving for even a single famous French fry since, but the one aspect of the McDonald’s racket I just can’t seem to quit is their breakfast situation. To me, the biggest coup the company has had in possibly their entire history was in 2003, with the invention of the impossibly addictive McGriddle sandwich.

At first, the idea seemed bizarre and a little obscene. A Sausage, Egg, and Cheese McMuffin made with two small pancakes instead of an English muffin! And the pancakes already have maple syrup cooked right inside! AND, for the shock and awe of it all, the pancakes are imprinted with the famous McDonald’s golden arches! What an amazing and delicious time we live in, where we can hold an entire convenient, corporate branded breakfast in our hot little hand and eat it mess-free while driving to the proctologist’s office for our annual check up.

It’s a tasty, perfect little ball of fat and carbohydrates, and what could possibly be wrong with ingesting 600 calories worth of artificial eggs, polythene cheese, delicious sugary hotcakes, and sausage that was reconstituted from meat industry leftovers, soaked in ammonia, injected with artificial flavors and colors, and then reformed into the shape of a patty? I mean, why not? Judge all you want, my uppity culinary parvenus, as rotten as it may seem on paper (or in this case pixels), the McGriddle is the peerless heavyweight champion of fast breakfasts.

Over the last few years, I’ve improved my eating habits dramatically; eliminating basically all fast food, shopping at Pilgrim’s Market for veggies, kombucha and gluten-free jazz, and paying obsessive attention to nutritional labels, but the McGriddle is the one rebel moment I occasionally allow myself to have guilt-free. I’ve got it down to about once every four months, but there are those mornings when my appetite is pulsating with the idea of making the trip of shame through McDonald’s reliably speedy, efficient drive-thru window for some hot, precious McGriddle love action.

Keep your damn Quarter Pounders out of my face, flush your Big Macs, and shove your McNuggets where the sun don’t shine, but give me my Sausage, Egg, and Cheese McGriddle or give me death. And most likely, death is actually an ingredient found in trace amounts inside McDonald’s sausage patties, so hey – I guess I’m getting the best of both worlds.

An afterthought: whatever became of the Hamburglar, Mayor McCheese, and that loveable purple blob Grimace. Did that whore Ronald McDonald go and poison them with toxic McGriddles?
Posted by Patrick Jacobs at 5:43 PM