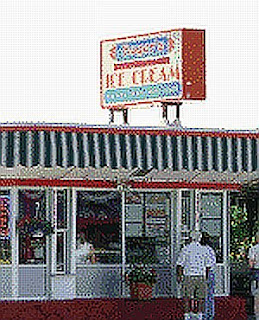 “Quick! Grab it before your teacher sees it!” I whispered to the little girl. She was glaring teary-eyed in shock and sadness at her just-dropped chocolate ice cream cone on the sidewalk, which seemed to be looking up at her like it would hop back up into her hand on its own free will if it could. She was among a group of about twenty hyperactive preschool-aged “Art Camp” kids and two very frantic “Art Camp” teachers still all dressed up in their Kiddie Parade outfits. They’d decided to besiege an already busy Roger’s Ice Cream moments before my arrival.

The little girl gave me a quick wide-eyed glance and went for it, rescuing her rapidly melting treat in the nick of time. “Five second rule, it’ll be alright,” I told her, but she was already too far gone back into her ice cream to care, detachedly covering her face and hair with chocolate goo as if it were one of her Art Camp projects.

I listened to each and every one of those kids approach the girl at the walk-up window and order their ice cream. “Um…I’ll have a…uh…um…vanilla!” After the long, grueling moments of indecision, almost every kid would pick plain old vanilla, with only a couple of token chocolates thrown into the mix. When one brave boy climbed up to the window and ordered a scoop of bubblegum, I wanted to applaud him for his sheer vision and ingenuity. 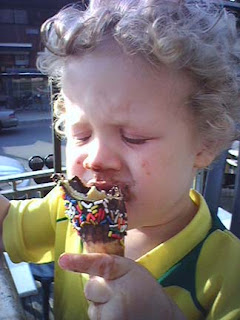 Certainly, the kids had plenty to choose from. Roger’s doesn’t offer quite as many flavor options as some of the national chains, but here quality trumps quantity. Many flavors are made from scratch locally, with the addition of popular favorites from Denali Flavors such as Caramel Caribou and Bear Claw. Also on hand is the vanilla peanut butter-fudge swirl of Moose Tracks, the flavor that prompted former VP candidate Sarah Palin to say it was “near and dear to my heart”, but you don’t have to let that stop you from enjoying it.

New owner Mark Randolph has done a mighty terrific public service by resurrecting Roger’s from real estate oblivion, after it sat painfully empty for an entire summer last year. Long time locals and in-the-know visitors alike were beginning to seriously worry that the historic walk-up eatery had become a thing of the past, destined to be torn down and replaced by pricey townhouses or yet another Home Depot. For decades the place was known as the Dairy De-Lite, and it was the headquarters for several generations of neighborhood residents seeking cheap sustenance and old-fashioned refreshment on hot, lazy afternoons on the way to and from the beach.

The original Roger’s Ice Cream was born in Moscow in 1940, eventually relocating to Coeur d’Alene for a stint at the corner of 4th and Sherman. It finally took over the current spot from Dairy De-Lite in 1992 with very few noticeable changes. Similarly, Randolph has managed to erase the memory of Roger’s hiatus by leaving things virtually the same, including the classic red and white exterior, the cheerfully adept teenage staff and the uncomplicated burger selections. The menu’s lack of variety is refreshing in a fast food world where too many multiple choices results in a form of mental block known as Jack in the Box syndrome.

Available options include a single plain burger or cheeseburger, of course. Then there’s the Double-D with two patties and cheese, the Triple-D with three patties and cheese, and I had to ask the counter girl just to make sure, but yes indeed, the .44 Caliber burger includes 4 beef patties and cheese piled high on a bun. Fries are available in one size only, and that’s the extent of the food menu other than Randolph’s healthful new additions of a Turkey Burger and a Veggie Burger.

The gaggle of preschoolers finally cleared out and I placed my order. Between the radio and the chaos of cookery, the noise level in the tiny kitchen was so intense I had clarify after the counter girl looked at me sideways and said “uh, sorry, we don’t have ribs.” I smiled and said it a little louder; “I’ll have a Double-D with fries and a Mr. Pibb.” We laughed and I added on a scoop of homemade Huckleberry Ice Cream. 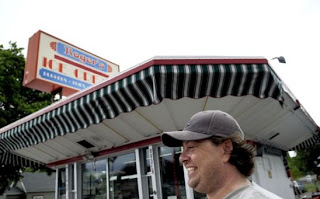 I grabbed one of the picnic tables in the shady covered outdoor patio and wrapped my fingers around my Double-D burger. A Roger’s burger can be a messy beast; the patties sprawl outside of the borders of the bun and the shredded lettuce and tomato slices are piled high. There’s a dense layer of a thick, white spread made from (I think) whipped mayo and cream cheese. The beef itself is sizzled up on a well-seasoned grill and tastes comfortingly home-cooked. My fries were pretty much cold but still tasted great. Thin, crispy, golden brown potato strips with skin deliciously intact and salted so well I retain water just thinking about them.

The grand finale was the ice cream cone, a scoop of rich homemade vanilla blended with what our local Stickman refers to as “Purple Gold,” sweet, plump Huckleberries. I was so enrapt in its tangy goodness, I had to stop myself from smearing it all over my face and hair, and if I’d accidentally dropped it on the dirty sidewalk, I’d have just picked it up and kept eating. Five second rule, you know.
Posted by Patrick Jacobs at 10:40 AM

After reading your article I ventured down to Roger's on Sunday.I have to say quite tasty.I thought the fries were excellent.Thanks for reminding me Roger's was open once again.

Well I don't care about many options if the ones I got are completely 100% quality, so I think this place and the review you just did ended-up convincing me to quit TCBY!

it is so cool, I think that these kid of things are so interesting, I love also the ice cream, I love these supermarkets!

Roger's is one of the best burger places in town! ♥ So glad Mark decided to resurrect it! And just the way it was. :) I had so much fun working there, serving customers and just having a good time (I don't mean being lazy by that! Haha.) Weekends are the best time to go. Look for the cook with the (really) red hair mixed in with all that black peeking out under his hat. He's the best cook in town...and in my kitchen, too. :)

Do they still offer the 1 cent banana split? THAT was the essence of Rogers. You picked your banana out of the basket. The price was rolled up (1 cent & up) and taped to the banana.

When we were short on change, several of us would go to Rogers together & gamble on having enough for the total. :)txing