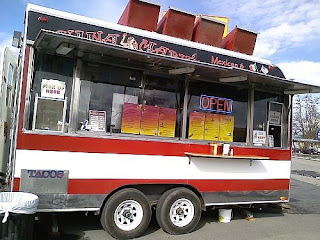 I’ve heard it said occasionally that there just isn’t any really awesome, authentic Mexican food in this area. I’ve enjoyed tacos made by sweet, pencil-browed abuelitas at sweaty California flea markets, and short of actually visiting Mexico itself, it’s hard to find more authentic cuisine anywhere, let alone the upper stretch of Idaho. Still, maybe it’s just because I adore nearly all Mexican food that lands in front of my hungry face, but I do think we have some decent selections in town. After several fruitful visits to the new Nina Mary’s mobile Mexican eatery on Fourth Street in midtown Coeur d’Alene, I’m adding it to that list.

The main streets of nearly every city these days is lined with huts, trailers and cabanas serving up everything from coconut crème lattes to Chicago-style hot dogs, and our town is no exception to the trend. It’s an ideal situation for those business-minded folks who want to shimmy their way onto the food and beverage scene, but don’t have the cash to dump into a full-scale operation.

In a one block stretch near the intersection of Fourth and Spokane alone, there are four of these sorts of places, five if you count the fresh fish truck that parks nearby several times a week. It’s a good use of space; the Goodwill and Runge Furniture parking lots are concrete deserts that rarely see any action on their outer edges, so why not plop down a couple drive-through coffee huts, a hot dog and hamburger stand and a taco truck? After all, there can never be too many convenient ways to self-induce acid reflux or the caffeine jitters. 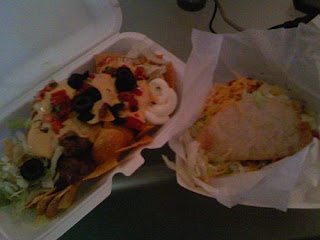 I was killing time at the Laundromat a few blocks away, waiting for my socks to tumble dry, when I saw a flyer for Nina Mary’s on the bulletin board and my tummy gurgled with interest. The place was tiny but hard to miss, with bright red and white paint and an image of a sexy senorita winking and waving a rose at passing cars. There’s no drive-up window, so I parked nearby and shuffled my way up to the menu board.

Many taco trucks feature a somewhat limited selection of a few core Mexican menu items, but along with the usual burritos, taquitos, and Carne Asada, Nina Mary’s broadens the scope to include some standard American fare as well, such as corn dogs, cheeseburgers and French fries. Their offerings are also considerably less experimental than some of the taco stands I’ve encountered, so any worries about ending up with chopped tongue or other questionable entrails in your tacos are thankfully nonexistent.

I sat at one of the two umbrella-covered patio tables nearby to wait for my lunch and watch traffic whizzing up Fourth Street when my eyes caught the reader board across the street at Pilgrim’s Market. I had to smile at the irony of its message considering my current circumstance: “Free Lecture: Improving Heart Health”. Certainly I wasn’t making best friends with my cardio-vascular system by stuffing my face with a fat chicken taco and a heaping plate of nachos with all the fixings, but I figured since they involved a few spoonfuls of pico de gallo, at least I was getting in mini-serving of nourishing vegetables to make up for it.

My hard-shell taco was overstuffed with good things, including a scoop of incredibly juicy and flavorful grilled chicken. The nachos were like something your mamacita might whip up at home, with so much refried beans, tangy guacamole, and sour cream weighing them down, I had to break out a fork to tackle them. Some folks are put off by the use of queso rather than shredded cheese, but their version was smooth and creamy, and I often prefer it over the luke-warm, re-congealed cheddar that curses many plates of nachos. 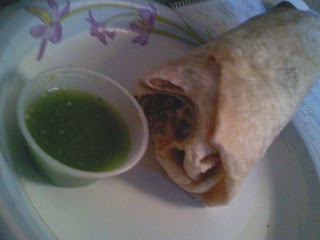 My lunch was quite easy on the wallet as well, but a couple of days latter I discovered an even better bargain when I returned to Nina Mary’s for a sausage, egg and cheese breakfast burrito, which was a tank of a morning meal for a mere $4.50. It’s like a big, happy fry-up in a giant, super-fresh tortilla, and includes hash brown potatoes cooked to a divine crispiness, adding a satisfying crunch and a lot of volume. A splash of their green hot sauce provided a nice, spicy morning pick-me-up and added a needed dimension of lightness to the heavy-duty burrito.

People with a tendency toward hangovers will want to put Nina Mary’s breakfast burritos at the very top of their roster when in need of something massive and greasy to soak up the queasy fuzziness of the night before. They’ll be so impressed that when their tummies have settled and they’ve had a nap, they’ll want to come back later for lunch.
Posted by Patrick Jacobs at 12:05 AM

Thanks for the information. I had lunch at Nina Mary's today and the nachos were wonderful. Lots of great Mexican flavor and generous proportions. Great service and fast to get your meal. I would highly recommend Nina Mary's to everyone.

Ah mate thanks a lot. I’ve been looking for a lot of jQuery tutorials regarding charts and i stumbled upon this.Just wanted to say thank you for the help.

Ah! I bought the exact same shelves from Target and had the EXACT same problem! I actually tore up my receipt from Target, rolled it into a few small balls and shoved it in the holes on the back of the shelf. Worked like a charm. Great minds.... :)