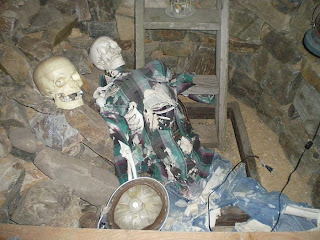 “Get your kicks on Route 66”. Depeche Mode’s 80s-era cover version of the old rock-n-roll road trip classic was occupying the sound system as I pulled a stool up to the bar at Noah’s Canteen in Kellogg. Stumbling into the song was pleasant and unexpected, but also somewhat appropriate considering that I’d spent most of that sunny March morning leisurely travelling the crumbly, winding side roads that run east adjacent to I-90. Actually, I wasn’t getting my kicks per se; it was more like I was finding my Zen on old Highway 10.

There’s a lot of history and intrigue sprinkled over the cow path that started out as the Mullan Road in back in about 1860, specifically the length running from just east of 4th of July Pass through to the Montana border. It’s basically a Sunday drive to end all Sunday drives, passing through a series of towns where the pace of life seems much more languorous and simplistic, where the only real evidence that it’s 2010 and not 1950 are the time-swept exteriors of the homes and structures and the modern-era vehicles sitting in front of them.

Of course, between these villages there’s plenty of raw nature to luxuriate in and quite a few notable landmarks to investigate, and it’s fantastic to get a slow, intimate look at territory people normally zoom through hastily without paying attention. 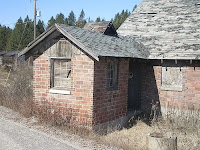 I started my odyssey that day by exiting off the freeway at Rose Lake onto the stretch of the antiquated two-lane highway that’s now known as Canyon Rd. Moons ago, this area was a hip, happening little town known as Canyon, and just a few homes, the crumbled ruins of a store, a gas station and a motel, and a still-active elementary school survive along on its main drag, Schoolhouse Loop Road.

The Cataldo Mission is the oldest standing structure in the state, and is no doubt a fascinating, if rather spooky, glimpse into the life of the region’s earliest settlers. However, I’ve seen it a million times, so I decided to give it a pass in favor of pressing onward, over the Coeur d’Alene River and toward my still undecided destination. 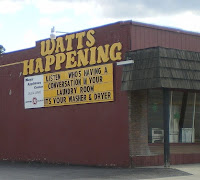 Travelling through Kingston, I closed my eyes to sneeze, and nearly missed the town but did notice that its refurbished 1930 High School Building, now a residence, was currently for sale. I briefly entertained a wild fantasy about transforming it into some kind of neon-lit disco sushi karaoke palace, but certainly the locals would kvetch and moan wildly, and I guess I don’t really blame them.

There was more to Pinehurst than I expected, including an old-fashioned drive-in burger joint and Watts Appliance store, whose yellow reader board dabbles in both surrealism and paranoia with “Listen. Who’s having a conversation in your laundry room? It’s your washer and dryer.” Smelterville’s main claim to fame in this day and age is its relatively petite WalMart store, but more interesting is the fact that the bumpy, potholed road through town is the only remaining section of the original 1930 highway pavement. 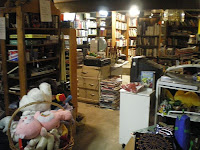 Continuing on into Kellogg, I headed straight downtown to trawl through one of my favorite oddball shopping places in North Idaho, Papa’s Barn. The antique mall/thrift store/curio museum is made up of three older-than-old buildings sewn together and down in their musty basement, they’ve got a weird rock waterfall crawling with taxidermy animals and a creepy cave haunted by a couple of skeletal “miners”. Along with some high-end art and collectables, they sell mountains of everything from Bee Gees records to plastic Expo ‘74 drink coasters. Naturally, I couldn’t leave the place without purchasing both. 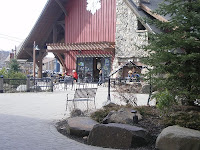 My journeys ended in a much more contemporary setting, inside the lounge area at Noah’s Canteen, which was built along with the rest of Silver Mountain Ski Resort’s Gondola Villiage around five years ago. It’s an extraordinarily comfortable place for lunch, with a homey feel and a reasonably upscale menu. Despite the gorgeous weather, only a handful of patrons were taking advantage of the place’s open-air feel and fireplace patio.

Waiting for Sarah, the refreshingly down-to-earth bartender, to bring my Chicken Pesto Panini, a snowboarder-type approached the bar and asked for another “Sierra Delicious Nevada” pale ale. Of course, I had to have one too. And delicious it was, as was my sandwich, and although it wasn’t really a Panini to me since it wasn’t grilled, its seasoned meat, tomatoes, and gooey cheese did indeed hit the spot. 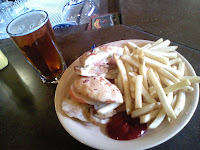 A couple across the bar was conversing about the Gondola rides that take you up, up and away on a 17-minute trek to the top of the mountain. I actually pondered the idea for a brief moment until I realized I’d sooner walk the entire Mullan Trail uphill both ways in light of my paralyzing fear of heights and being trapped inside huge dangly buckets on wires. Besides, thanks to Noah’s Canteen, I had lost my spirit of adventure and was suddenly in need of a post-lunch nap, so I hopped on new-fangled I-90 for a swift return home to my awaiting couch.
Posted by Patrick Jacobs at 12:58 PM

Excellent post. I've got everything about Depeche Mode songs. They are my favorite band and I think we can share some experiences about it because I know you've got the same musical taste.