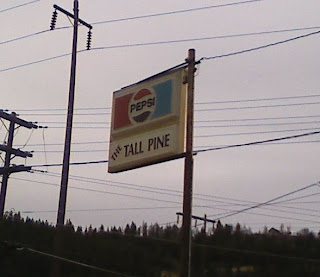 “A small town is a place where there's no place to go where you shouldn't.” ~ Burt Bacharach

Allow me to paraphrase TV’s lovable Pine Sol lady: That’s the power of Pinehurst, baby! Specifically, I’m talking about the power of the Tall Pine Drive-In, located in the center of the booming metropolis known as Pinehurst, Idaho. At least it was definitely more booming than was expecting on my recent jaunt through town. In fact, the area surrounding the landmark burger hut was positively percolating with traffic and activity.

Pinehurst was always one of those towns I’d pictured as basically a dusty gas station and a couple of manufactured lean-tos. I was pleasantly surprised the first time curiosity led me down I-90’s Exit 45 into a town that’s actually substantial enough in size to be worth investigating, although you can probably leave your shopping shoes at home. There is a medium-sized grocery store, a beauty salon, and a couple of other necessities near the same intersection as the Tall Pine, but if you’re looking for a new Louis Vuitton handbag or the latest CD by Lil’ Wayne, keep on driving.

Many people living in medium to large cities and towns, including myself, have been known to be occasionally mystified by the idea of living in a town with little to no access to the culinary conveniences of modern urban life. How unfortunate it must be, they say, to live somewhere without so much as an Applebee’s. Not even a single Taco Bell? Oh, the humanity!

In reality, Pinehurst residents are the lucky rascals. The Tall Pine may not keep up with the latest mass-marketed epicurean trends, and their servers may not be required to wear flare on their uniforms while singing you “Happy Birthday”. Instead, they serve a broad variety of freshly made, old-fashioned classics that are guaranteed to have more heart and soul than anything found at any of the big city behemoths.

The Tall Pine seems to be Pinehurst’s central gathering place as well, and there isn’t really much room to gather in. Although I arrived mid-afternoon on a weekday, a quick glimpse into the tiny dining are revealed the crowd to be elbow-to-elbow. I need some room to swing my elbows around when I eat, so I decided to utilize the clever walk-up window, a restaurant feature that’s all but vanished into the mists of time.

I was unable to track down the exact age of the Tall Pine Drive-In, but it’s certainly been around at least long enough to remember a time when restaurant chains didn’t even exist and Wimpy was offering to gladly pay Tuesday for a hamburger today. Aside from some fresh paint now and then, and an impressive collection of still-packaged Hot Wheels hanging on the kitchen wall, the Tall Pine has most likely remained wonderfully unchanged.

As with all drive-ins, juicy burgers are the primary draw, and the Tall Pine is no exception, with hand-formed, 1/3 pound patties of lean beef available in a dozen different formats. Their trademark burger is the “Grizzly”, which with its double patties, pile of bacon, and layers of both Swiss and American cheeses was way beyond the calorie limit of this hungry bear. There might be some stereotyping hiding in the “Lowrider” along with the nacho cheese and jalapenos, but with such a novel flavor combination, who cares? Also, I won’t speculate too deeply on how their chili, cheese and onion burger earned the name “the Jackass”, but the image of Johnny Knoxville with a lighter in his hand does spring to mind. 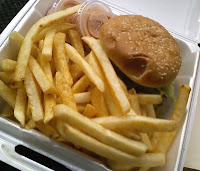 Ironically, the “California Dream’n” isn’t a ham sandwich; it’s basically a BLT burger with Swiss cheese and some guacamole to take it over the top. Also on the menu are deli and hot sandwiches, fried fish and chicken strips, large salads, even a small selection of Mexican standards. I decided on the “Tall Pine” burger with a small order of fries, figuring a namesake burger is usually a good representation of what an eatery is all about.

The Tall Pine does have a few outdoor tables, but I wasn’t keen on going to town on my lunch in front of Pinehurst traffic, so I decided to trek down to the road to the Trail of the Coeur d’Alenes trailhead area and dine al fresco next to nearby Pine Creek. I opened the to-go box and it was overflowing with thick-cut, still-sizzling fries sprinkled with some kind of red spice action. I suddenly lost control of my reflexes and immediately popped on in my mouth, burning my tongue in the process.

It was well worth the pain; they were scrumptious. The crisp lettuce and fresh tomato slice in the first bite of my burger helped cool my palate, while the ham slices, tangy cheese, and savory beef patty gave it a definite thrill. The Tall Pine serves the sort of time-honored goodies with enough power to cause the Pine Sol Lady’s eyes to well with tears of joy and make even the most spoiled city dweller consider calling Pinehurst home.
Posted by Patrick Jacobs at 12:00 AM

I'm trying to contact the author of this blog and emails sent to orangetv@yahoo.com bounce back. I'm with a Food Network TV show that's considering featuring area restaurants and I'm looking for recommendations around Coeur d'Alene. Please let me know an alternate email that I can contact you with!

Hi Josie, that is my correct e-mail address, I'm not sure why they are bouncing. I do have an alternative email of pwjacobs@rocketmail.com. I look forward to communication with you about this exciting prospect!

My husband and I ate at the Tall Pine this week as well. It was after a round of golf at the local course. We both thought the food was great and look forward to eating back our calories after golf in the near future :)

Next time you are here in the Silver Valley and hit the Tall Pine, try a milkshake or malt. They are great!

So what is the owners name that wrote that long Glowing review of his restaurant?.