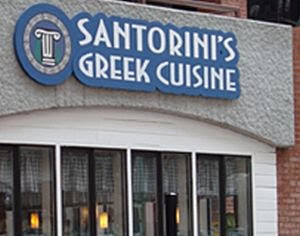 I always enjoy Greek restaurants, but I think the thing that magnetizes me back to them again and again is the dessert. The rest of the meal is just going through the motions, leading up to the grand finale of the rich, honey glazed pastry known as baklava that manages to send both my taste buds and my very soul into a state of bliss every time.

I’ve yet to cross paths with a hunk of baklava that has falls anywhere short of scrumptious. If it weren’t for fear of questionable looks from dining partners and restaurant staff, my Greek lunch would include a baklava hors d’oeuvre, baklava for the main course, and baklava for dessert, naturally.

While this is assuredly a most delicious idea, it isn’t so much a practical one nor is it especially good for the old waistline. The idea did cross my mind as I walked into Coeur d’Alene’s new Santorini’s Greek restaurant, but that’s really no sort of way to get a real perspective on the rest of a very promising menu.

Owners Dino and Fotini Tsakarestos weren’t just whistling "Saranta Palikaria" when they chose the word “Authentic” to land before “Greek Food” in all their ads. They arrived from Crete in the ‘70s, and have 30 years behind them in the restaurant world. The reason for their good reputation is apparent right away, with instantly warm service and a menu bound to make any empty tummy roar. 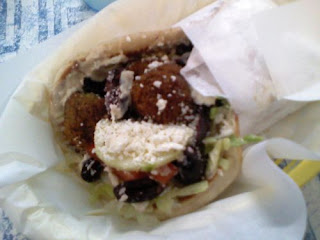 Appetizers consist of both old standbys and uncommon discoveries, including the beefy, lemony stuffed grape leaves known as Dolmades, Spanakopita (spinach and feta baked into layers of filo), and Saganaki (a plate of rich Kasseri Cheese sautéed and brandy and served with pita bread). I like the simplicity of kicking off with pita slices and a bowl of tangy roasted red pepper hummus.

Dinner is served from Thursday to Saturday and stars such palatable prospects as Mousaka, a dish made up of sautéed eggplant, potatoes and seasoned ground beef, and taken back to the old country with a homemade béchamel sauce. The indecisive will find comfort in the Santorini’s Plate, a sampler combining Mousaka, Dolmades and carved-from-the-spit slices of gyro meat, served with roasted potatoes and veggies.

The first time I whizzed by the strip mall Santorini’s sits in and saw the “coming soon” banner, I was so jazzed I called their flagship Spokane restaurant to find out exactly when they were opening up. “Next week,” I was told, and after about a month or so and probably a dozen slow, leering drive-bys, I heard word from a friend that the house lights were finally on and the grill was fired up and ready to go.

I waited a few weeks for the initial buzz to fade, but the place was still hopping with an early lunch rush. The refreshingly uncluttered wallscape features just a few panoramas of the Greek isles and some enchanting Greek souvenirs. Santorini’s is crisp and clean with fresh white paint, bright lights, and the aroma of new carpet. My order was taken right away, and I panicked momentarily when I overheard my waitress tell the kitchen she couldn’t seem to track down any baklava. Fortunately, I had showed up just in time to luck out with a fresh batch, brought out ceremoniously to restock the empty shelf in the dessert case. 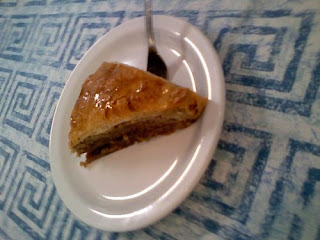 The waitress returned to my table with a big slice of it along with the rest of my lunch. I resisted the urge to dive into the pastry right away in favor of a steaming cup of homemade Avgo Lemono soup, the strongest evidence available that the marriage of chicken, lemon and herbs is a recipe for pure joy.

I had to ask for extra napkins about halfway through my overstuffed falafel gyro. The waitress and I came to the conclusion together that sometimes messy just means its extra good. By the time I was finished, just as many lettuce bits, diced tomatoes and Kalamata olives ended up on my sweater as in my mouth, and my face was a mural of smeared feta and Tahini sauce.

Sadly, I was so stuffed I had no room left for baklava, so I had to send it back. Right, as if that would ever happen. In reality, I took on the flaky, golden brown triangle with a full-fork attack, and right away I noticed something a little different. Crushed almonds and walnuts bulked up the layers of crispy dough instead of the usual costly pistachios. They weren’t missed at all, in fact I embraced the unusual twist, and when I’d scraped every savory morsel from the plate, I sailed off into the afternoon on an Aegean sea of contentment.
Posted by Patrick Jacobs at 12:00 AM

Email ThisBlogThis!Share to TwitterShare to FacebookShare to Pinterest
Labels: Greek

We will definitely want to taste it's recipes

My experience was great. The food was amazing and delicious. To the new owners, thank you for opening a great place to eat.

We're going to try it this week!

They really stuff their gyros with meat and lots of feta cheese.

Nice people, hustling wait staff. The kind of people I like to give my money too.

Anybody know what became of the nice couple that had the place before them, "Mangiamas", I think it was called?

My boss and I were just driving by there after a meeting this afternoon and he said he had heard good things too - but you made it sound so mouth-watering and I LOVE greek food, so I am THERE!

heading there for lunch in 1 hour!! thanks for the great review you convinced me!

We eat there about once a week. My husband LOVES the spaghetti.....it has a taste of cloves which makes it deliciously unique. I love the gyros, but also the hot vegetable salad (really...) is heavenly. It has a cheesy, yogurt dressing which is pink.

We love this place.