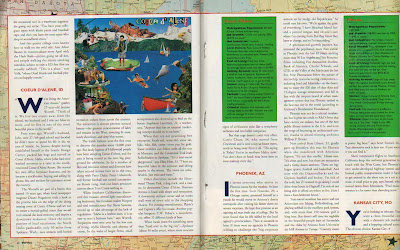 Swing Magazine was a relatively short-lived but popular national magazine which was published during the early to mid 1990’s and included the tag line "Life In Your Twenties" under the masthead on the cover. It was one of the very first publications geared heavily toward "Generation X", a group of people who had begun to graduate from college and was just starting to make enough money to consider where they wanted to establish a career and settle down.

I was living in Seattle at the time and had only been back to my hometown of Coeur d’Alene a few brief times since relocating shortly after the stroke of my 18th birthday. A city boy at heart (who had never actually lived in a city), I couldn't wait to get out of Dodge. Coeur d'Alene was far from what I would call a "best place" to live, at least in my mind. In fact, to me it was pretty dismal, a place where people were more into keeping things mind-numbingly status quo instead of exploring the endless possibilities of the future, an idea I was enamored with and compelled by at the time. 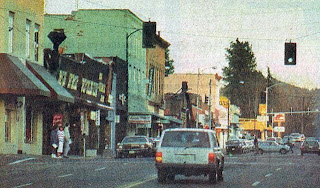 When I left, the majority of shops downtown were empty, there was no nightlife to speak of, nothing particularly cultural or stimulating other than watching cars cruise up and down Sherman Avenue for hours and hours (whilst avoiding flying empty beer cans), trolling through the quaint, pointless Silver Lake Mall, or spending all night getting buzzed on bad coffee at Perkins or Denny's.

Shortly after the issue of Swing hit the news stands, a friend clued me in to the fact that my hometown was featured within, so I rushed out to buy a copy, the very copy which I rediscovered recently at the bottom of a box in the back of a storage closet. Flipping through the pages reveals a time capsule of what was trendy and in vogue during the mid-90's, with articles about eco-friendly hemp backpacks, the new art of piercing and body modification, the stunning debut of singer Erykah Badu, and the contrasting hipness factor of presidential opponents Bill Clinton and Bob Dole.

The “best places” article describes Coeur d’Alene as “the next big playground for celebrities” and as a “lawless state” where businesses galore from Southern California were beginning to relocate to take advantage of the “lack of regulations”. It describes the employees of these businesses as being “won over by the low cost of living, idyllic lifestyle, and absence of crime”.

“The attraction is almost peerless natural beauty,” it continues, describing Coeur d’Alene as a “year-round playground” and lists every good time outdoor recreation activity known to man. Further mentions include Patty Duke, a “downtown antique center”, a “thriving” factory outlet mall, and 32 types of beer on tap at T.W. Fishers. The article concludes with a quote from a recent transplant from Cincinnati: “The saying is ‘Relax! You’re in northern Idaho now.’ You don’t have to honk your horn here or where make up every day.”

It was a bit surreal and surprising to me to see Coeur d’Alene featured in such a blindingly flattering light. For the first time I can recall, I was actually sort of proud of my hometown and I showed the article to all my Seattle friends and co-workers. “See, that’s where I grew up. Pretty cool, huh?”
Ironically, several months after the article was published, I ended up being forced to move back to Coeur d’Alene after losing my job and running out of money. I was dreading the move, but I ended up making the pleasant discovery that the town I returned to was quite different than the one I’d left years before.

In the span of only seven years, the town had grown up, and would continue to grow with high rise condos, farmers markets, actual places to shop, quality theater, even an active music scene emerging onto the landscape. It’s interesting to note that when I moved away there wasn’t even a single place to get sushi, now there are at least half a dozen.

So, I guess Swing Magazine was right, we are pretty darned lucky to live in such a gorgeous, happening place. When I returned nearly 13 years ago, I had every intention of moving back to the big city as soon as I could raise the cash. I never left. Coeur d’Alene had grown up just enough so I could get my fix of city life and live the idyllic life of a lake dweller as well, and any urge to leave rapidly drifted away. Ultimately, I realized that no matter where I roam, this will always be home.
Posted by Patrick Jacobs at 8:55 AM