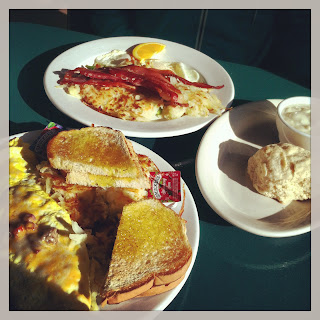 The jumbo yellow sun was shining on our puffy little faces more dramatically than it had so far the entire year, sweeter than the sticky yolk of a Cadbury Creme Egg. Yes, it was Easter Sunday, and despite being up the night before later than may actually be legal in the grand old state of Idaho, my house mate and I were up at 8 am with full-on borborygmi happening in our tummies.

It was early enough to beat the post-worship Easter Bonnet crowd to pretty much anywhere we wanted to eat, so I threw a hat onto my Hurricane Helen bed hair, and with bleary, hungry eyes we pointed the car north and rambled up an eerily vacated Government Way to the Broken Egg Cafe. As I had hoped, only ten or so vehicles lined the front of the building, and with an ample amount of tables and a long diner counter, we knew we wouldn't have any trouble at all getting seated pronto.

Last August, the Broken Egg blossomed like a stylish young butterfly from the dusty old cocoon of the former Rockin' Robin' restaurant, and it has become on of our go-to breakfast spots ever since. Not sure what happened to the good old RR, but according to chatter on the street, the story was a time-honored tragedy: owner decides to sell it, kitchen employee decides to take the risk and buy it, and the whole thing slowly crumbles due to a lack of experience and funds.

Last time had eaten at the Rockin' Robin, it had become the Grunge Central of the Northside and half the menu items were crossed out with a sharpie (Aw, c'mon. No waffles, really!?) . I knew they didn't have much vital spark left in them, and they didn't. I felt zero shock when I drove by the place not much longer after that to see the sign out front replaced and something new formulating. The Broken Egg Cafe seemed like a reasonable enough name, but I was still nervous. Unless they were to get a hazmat crew in to do a scrub down and fully purge the building of it's crusty-fusty faux 1950's rock-n-roll accoutrements, the Broken Egg was doomed.

Happily, the first time I stopped into the new place after it opened, I was pleased to see that it was cleaned up to the point of being nearly unrecognizable and that the decor style had been brought up to at least the late 90's/early 2000's era. Opposite walls are painted various bold earthy colors (pale green/rust orange/autumn red) and the decorative features adorning them remind me of what would happen if Target decided to open a chain of discount restaurant decor stores. That's not a complaint - the artsy, frameless black-and-white prints of enlarged eating utensils, and mirrors with retro-space age satellite frames are a thousand times better than the nicotine-stained Elvises and scratched-up vinyl 45s of the Rockin' Robin.

Then there's the food. Although the Broken Egg has kept the menu nearly identical, the quality of the meals they put out make anything that came before seem like a creepy distant memory. In my half-dozen or so drop-ins so far, I've been for the most part impressed - the food is classic and tasty American breakfast and lunch fare with no fruity hipster complications whatsoever (I love you Garnet Cafe, but yes I'm looking at you). Unfortunately, the Broken Egg's lack of adventurousness ultimately knocks a couple of points off their tally. I'd have loved to see them completely toss out the old menu out with the rest of the clean-up trash and start from scratch with some items that would serve to give the place an all-new culinary personality of its very own.

Still, it's like I said, what they do put out out in front of their many hungry customers is perfectly acceptable and frequently delicious. Breakfastwise, the menu has all the tried and true standards with a few slightly unusual items that stand out: a Taco Omelet with seasoned beef, a Breakfast Hamburger (patty, bacon, egg, swiss cheese on a bun). Lunch is served from 11 til 2, and is just as fine as their morning fare. The menu has a bundle of basic burgers; a stack of sandwiches, hot and cold; a salon of salads; and a flock of fried finger foods.

Prior visits, I've hit their pancakes hard, several times. The one GIANT pancake they serve that keeps absorbing all the butter and syrup like an especially bitchy thirsty sponge that keeps demanding you to apply more, more, more. Another very memorable Broken Egg highlight for me was their Cheddar Jalapeno burger, which I ordered at random one late morning when I was feeling way over breakfast. It surprised me by turning out to be the tastiest, juciest, fieriest, cheesiest Jalapeno Cheddar burger I ever put down my gullet. Served with an epic mound of fries, it was a fully awesome come-up for only $7.25.

This most recent Easter morning trip to the Broken Egg, it was definitely still the breakfast hour, so I went for the Kitchen Sink omelet, which like it sounds, has nearly everything but... Well, in trifling amounts at least. It's mostly ham, cut into cubelets so tiny and wee that they're nearly impossible to tackle and manipulate with a fork. Similarly, everything else scantily sprinkled through this omelet (green and red peppers, mushrooms, bacon, red onion, tomatoes) is chopped up into such bitsy pieces, that when you attempt to bring a bite of omelet to your quivering lips, various ingredients cascade down back onto the plate and onto your dirty shirt, leaving you with a bite of nothing but eggs and eggs.

Once I finally twas able to teach myself a few clever tricks on how to successfully eat the thing (scrape and scoop, fast!), it was pretty good. Sadly, my giant hash brown patty was nice and crispy on the very outer layer, but mushy and extremely bland inside. It was Easter, so I had to thank Jesus for green Tabasco and sprinkle it heavily across my great white plateau of boring potatoes. Much better, amen.

The Broken Egg's prices are easy on the debit card and the service is always super duper. The waitresses here are caffeinated and chatty and fun and shine bright like the Easter morning sunshine even on the rainiest day in April (don't let the gorgeous weather fool you, you know it's coming soon). For the first time in years, there's an aura of positivity and breakfasty joy that surrounds this utilitarian old concrete building on Government Way, and I'd definitely recommend basking in it.
Posted by Patrick Jacobs at 3:46 PM

First of all the waitress that took our order was very nice.
That is about the only thing about the Broken Egg good that we can say. The Broken Egg was the worst breakfast we have ever had in Coeur D Alene, and we haved lived here forever. The Hash Browns are the worst, not even cooked, the biscuit was a glob of tasteless flour, the gravy is bland, the sausage has bits of who knows what in it, and tastes like pure grease, the eggs were good, the coffee excellent. Not sure what people are raving about. We will never go back, we will stick with the likes of Blue Plate in Hayden, where everything is fresh,cooked not cold,and the staff treats you like family. Adios Broken Egg.