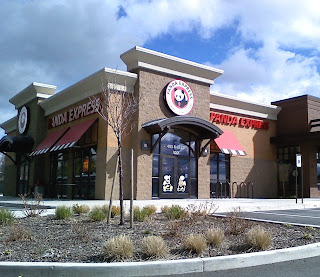 One of the nine easy questions included in the Get Out blog’s recurring man-on-the-street survey “Nine Easy Questions” is “Which is the best Chinese restaurant in North Idaho?” Apparently, the question isn’t actually so easy, with most of the responses looking somewhat indecisive and usually rather grim.

“Hmm, Chinese. We don't really go to any of the Chinese places in town. Maybe we should try a couple of them again sometime, but we've never found anyplace that we really liked”, complained one respondent. “If you find a good answer for this I'd love to know where to go. Both the places in downtown Cd’A are not bad, but I still think something is missing”, wrote another. One local food fan got right to the point, saying “I actually think they all stink around here” and a few folks chose to just leave a blank space next to the question, which pretty much says it all.

I don’t necessarily agree with this consensus, but I was surprised and alarmed to see the name that popped up the most as the best local place to load up on fried rice and egg rolls was the ubiquitous fast-Chinese chain Panda Express. To me, that’s a bit tragic and it’s the finest evidence of the real or perceived dearth of fine Chinese cuisine in the vicinity. It’s like living someplace without a good Mexican joint, where people are forced into naming Taco Bell as the greatest. A Volcano Burrito or Cheesy Gordita Crunch may work in an occasional pinch, and Panda Express isn’t necessarily terrible either, but these options are pretty lame compared to an authentic, unique ethnic dining experience.

The concept for Panda Express was hatched in Southern California during the mid 80s as a shopping mall offshoot of Pasadena’s popular Panda Inn by China native Ming Tsai Cherng and his family. The idea caught fire faster than a splash of wok oil on an open flame grill, and today there are over 1200 Panda Expresses scattered across the land. People seem to love the place’s clean, colorful interiors, which instead of the usual imagery of the Great Wall and ancient temples, manage to evoke feelings of a sleek, modernist China. 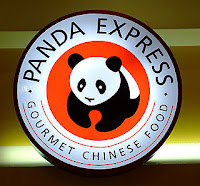 One major problem I’ve run into with their food is a severe lack of consistency. With most fast food places, there’s no mystery involved. A McDonald’s cheeseburger is a McDonald’s cheeseburger in Shibuya, Japan or Sheboygan, Wisconsin. With Panda Express, quality seems to vary wildly from store to store and from visit to visit. Even at the same location, I’ve had a fully delicious experience one day, only to return a few weeks later to be handed a plate of barely edible steaming muck.

Still, when it’s good, it can actually be pretty good. The trick is to know what you like and stick to it. Entrees can be ordered a la carte, but the usual method is to create a combo plate with your choice of a side dish and one, two, or three entrée selections, depending on your inclination and appetite. I usually choose half mixed vegetables and half steamed white rice as my side dish. I’ve always found their other two options, fried rice and chow mein noodles, to be extremely bland, and it’s nearly impossible to ruin steamed veggies and plain rice.

Their Orange Chicken is traditionally my favorite and perhaps it’s just a tricky dish to screw up too badly, but I don’t recall ever having been served a bad batch. The magic combination of crispy boneless chicken and spicy sweet orange sauce is fully addictive both flavor-wise and texturally. I’ve also had success off and on with the String Bean Chicken Breast, the Kung Pao Chicken and the Broccoli Beef; however the latter usually includes huge, tree-sized chunks of broccoli that are tasty but somewhat challenging to eat. 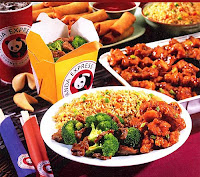 The teriyaki-esque Mandarin Chicken also lands on my good list, but I have ended up with a slimy, gristly batch a time or two, so beware. I’ve avoided Panda’s egg rolls since the time I ended up with a suspiciously fishy-tasting specimen, but their Chicken pot stickers always do manage to satisfy.

My current favorite, and possibly the most fantastic treat I’ve ever come across at Panda Express is their new Honey Walnut Shrimp. It consists of fresh tempura shrimp cooked in a light honey sauce and mixed with sweet, glazed walnuts. There’s a delightful, delicate crispiness to the dish, and its divine flavor can’t even be blamed on MSG, as the company claims to not use the flavor enhancer in any of their items.

All in all, I wouldn’t ever refer to Panda Express as the best Chinese food in this area or any other for that matter. While it does have its perks, and is great for satisfying certain cravings without spending a lot of time or money, it’ll never really hold it’s own against the old-school, nitty-gritty, greasy, magnificently sleazy Chinese food palaces of the world.
Posted by Patrick Jacobs at 12:00 AM

Panda is OK. Far better is the Chinese in the mall - seriously. Several former Panda employees work there and love to brag about how virtually everything is made from scratch, unlike Panda where they say it comes from the freezer.

Best Chinese within an easy drive is in Liberty Lake in the Albertson's Shopping Center. Called "Ding How" I believe. Large Sushi bar there as well. Nice fresh food, great waitstaff and a very authentic looking crew of Chinese cooks to boot!

What you don't like "Top of China" on Appleway? Hahahahaha

Try Wah Hing in Rathdrum. Very good and reasonable prices. Best I have found in the area.

Nice post! This is a very nice blog that I will definitively come back to more times this year! Thanks for informative post.

The residential to the USA are very well aware of the services and food provided by Panda Express. Thus here are the details that you can go through for Panda Express Guest Survey and Panda Express customer satisfaction survey by which you can appreciate or criticize the services you have received or felt after visiting.

Are you searching for a faster way to make more money legally? Then you have chosen the perfect post. because here we guide you how to win $5,000 in Kroger gift cards performing the Kroger customer satisfaction survey at www.krogerfeedback.com. So let’s check it out our post at the end.
Kroger Customer Satisfaction Survey to Win $5,000 Kroger Gift Cards

I am impressed by the information that you have on this blog. It shows how well you understand this subject.


Nice blog, the article you have shared is good.This article is very useful. My friend suggest me to use this blog.

The official Genghis Grill Survey can be found at www.genghisgrillsurvey.smg.com/.
Just like golf galaxy and dicks sporting goods survey, Genghis Grill Guest Satisfaction Survey is
hosted by the smg group. Genghis Grill cares about every customer and values their opinion.
This survey makes it easy for the customers to submit their feedback and help the company to serve better.
To take part in this survey, just hit up the link, enter the details,
answer all the questions and get a chance to win a surprise gift in the end.

Genghis Grill cares about every customer

You can also post query related Wingstop Customer Survey gift card and Wingstop survey reward prize then you can comment below and also share it with your friends on social media and WhatsApp.

welcome back friends. today below on our website and in this article we are going to talk about the my as you all are waiting for the


What a great information you shared with us, I am inspired by the method for the stage. It kept joined me regularly. Keep doing awesome. Thanks for sharing this blog article.

Nice post! This is a very nice blog that I will definitively come back to more times this year! Thanks for informative post.

KrogerFeedback.com is an official site created by Kroger and runs the program in benefit of customers and self too. Being the number one retail chain by revenue in the US with thousands of supermarkets, hypermarkets, superstores, department stores, fuel centers, pharmacies and jewelry stores in 34 states, Kroger is one of the most recognizable names in the US