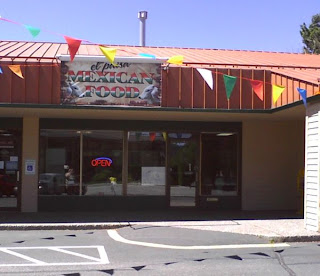 Driving absentmindedly north on Lincoln Way one afternoon last month, my wandering eye was caught by a bunch of balloons bobbling in the afternoon breeze, tied to a sandwich board bearing the image of a hungry,  pissed-off looking Bramha Bull. Once I realized what it all meant, I had to roll my eyes so hard I nearly swerved off the road. Lordy lord. It was yet another Mexican restaurant in a town with eleventy thousand Mexican Restaurants. Sometimes it seems like another new one pops up somewhere every few weeks, and I haven't been terribly impressed with the majority of them lately (Taco Loco, you do rock).

Still, I was curious to investigate, since somehow the newsflash regarding El Paisa's sudden appearance on the Coeur d'Alene food scene never crossed the Get Out North Idaho radar. Problem was, I'd actually just eaten lunch and wasn't I remotely grumbly in the tummy for some taqueria nuevo action. I decided to just run in and give it a quick the re-furbed former Donut House a looky-loo and grab a copy of their take-out menu for future reference.

It was around 11 a.m. when I popped in, and the eatery was fully devoid of customers. I sorta got the eerie feeling that they'd only had their door open for business for a couple of hours max, and I was probably one of the first faces they'd seen come through, ever. I was greeted by three desperate, anticipatory smiles and a booming, warm "hola, bienvenida a mi amigo!" from owner/chef Francisco Padilla, who along with (I'm assuming) his wife and the cash register girl, gave up their counter lean immediately and snapped into action for me.

Oh, I'm just grabbing a take out menu real quick", I stammered, but they seemed so deflated that I gave a quick glance up at the menu board and said "um, actually, on second thought I think I'll get a glass of Horchata." Mmm, horchata. I can never pass up an opportunity to order a glass of the refreshing, candy-like Mexican beverage.

From where I was standing on the other side of the counter, I watched the Senorita do something I haven't seen very often, if ever. I watched her make horchata by hand, pouring the rice milk into a little pitcher and then blending in the vanilla, cinnamon and sugar right there on the spot. No dispenser-type machinery involved. Plus, she did it with a giant smile, as if she were putting on a little happy show for an audience of one in an attempt to impress me and ensure that I would return someday soon to actually dine on food.

It was a magnificent beverage, and the experience put El Paisa at the forefront of my brain until two days later, when I was able the first of many comebacks. On my earlier breeze-in, I hadn't really had the chance to absorb the random nature of the ornamentation cluttered around the walls. In the most charming way possible, it looks as if someone's dear abuelita spent an afternoon scouring the downtrodden art bins of every Salvation Army and Goodwill in the suburban barrios of San Diego.

There's a couple of framed tourist posters that, upon close inspection, reveal themselves to be images of the Greek Isles instead of Mexico. There's a kitschy black velvet painting of a psychedelic toreador that will certainly frighten children and the elderly. A photograph of a boring tiger, some unidentifiable brass hangy-thing, several Country Living 80's ceramic and/or toll-painted pictures of country cottages. It's a bit like a compendiary history of tragic and forgotten mortgage office decorating trends, late-20th-century edition.

Who cares, I suppose? One has to start somewhere and what they had going on was way better than the visual impression left by my first visit to another new Cd'A Mexican Restaurant, Atilano's, who had electrical wires coming out of open socket boxes and swashes of red paint all willy nilly on the walls to cover up any evidence of the dead KFC it took over from (note: Atilano's has since "decorated" a bit more). Anyway, El Paisa is utterly spotless otherwise, if not a touch utilitarian and cold with it's slate grey tables, chairs and nubby carpet..

There's nothing chilly about the service at El Paisa, each of the half-dozen times I've come in, they've been nothing less than engaging. It's always the husband and wife, and sometimes the counter girl, who is frankly the only one who'd likely be able to muster up much of a score on the ACT Combined English/Writing test. It happens like this: you order with her, and she shouts your order back to the other two in Español and they snap rapidly into action.

The times I have visited when she wasn't around, I did pretty much figure out that the other two do know un poco de Inglés, but as I've mentioned in past reviews, I like to use these opportunities to be able to fully geek-out with my ghetto Spanish skills. To their credit, he El Paisa folks didn't cluck or chuckle at me for doing so, in fact they responded in kind (slowly, as not to confuse the tragic gringo).

Here's the thing about El Paisa: OH MY GOD! THEIR FOOD IS LIKE, TOTALLY TUBULAR! Yes, that statement does belong in all caps and it's also an homage to how I was the only male Valley Girl in the 6th grade at Lakes Junior High, an age at which I had my first unforgettable experience with authentic, non-Idaho Mexican Cuisine at some long-forgotten dark, sketchy joint near my Aunt's house in San Jose, California. I've been trying to find a chile relleno platter that comapres with that fond, fuzzy memory from so many years ago, but with no real luck. El Paisa finally took me back to that happy place. 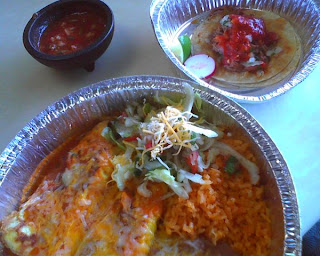 Okay, maybe I'd just starved myself to the point of delirium before I dug in, but regardless the dish was bright in flavor and light in texture, unlike some other chewy, burnt-egg tasting chile rellanos I've had the misfortune of suffering through. The cheese was bubbling up from underneath like a molten golden tar pit, and the thick red sauce was a rich puree of fresh-plucked tomatoes, herbs and Mexican spice. Rice is rice and pinto beans sprinkled with cheese are pinto beans sprinkled with cheese, but El Paisa does them really quite nicely, especially with a few generous splashes of their homemade green and red hot sauces (yes, both - why not?).

It escapes me now what exactly Jesi ordered on that maiden voyage to El Paisa, but I do remember she was equally smitten. In fact, separately between the two of us, we've returned nearly a dozen times since and the only minor complaint to arise has been that one day Jesi said the rice tasted "a bit off". Not unlike the hungry, pissed-off Bramha bull on their logo, I've plowed through sweet pork enchiladas (good heck, these were tender, succulent and just the right kind of sweet), taquitos rancheros (I never knew what a taquito could really be until I tried these, served with some sort of amazing ranch-dill sauce), and chicken tacos (made my bland experience with the ones at Atilan's fade into the mist). Fortunately for the Padillas and Co., it seems that I'm not the only one who finds El Paisa so addictively toothsome - on each visit the place seems increasingly more full of fanatic and famished folks.

Each time I've dropped into El Paisa for lunch, including the requisite glass of Horchata, I've ended up pulling less than $7 out of my wallet and have always come away feeling sweetly spent, like the joy synapses located inside both my brain and tummy were recovering from some kind of sublime and intense Mexican-food-gasm. And like various other other kinds of of "gasms", I always feel exactly like rolling over and having a little siesta afterwards.
Posted by Patrick Jacobs at 2:42 PM

Patrick, you make my mouth water just reading this review.
I love Chile Rellanos and have never found a truley good one here.
I know where I am having lunch today... Keep up the good work.

I know the secret to the "awesomeness" of their food! I recognized the counter-girl today...Lupe, the tortilla lady formerly of Cafe Chulo! And low and behold, there is Ignacio at the grill! Yes, the former glory of Cafe Chulo has returned under the guise of El Paisa! Lupe gave me a strange look when I teared up right there at the counter with tears of sweet, mexican food joy! Remember when Chulo was amazing...now it's not?

Today I had the chicken flautas. The chicken was to die for. It was "real" chicken. Not dumped out of a freeze dried package, or reconstituted in a vat of boiling fat. The flautas were huge and almost too much too eat. The rice was moist and had a mild tomato flavor. And all for $5.99! Sweet Jesus! Don't even get me started about the salsa. This is the best salsa in Coeur d' Alene. I can still taste the acidity of the apple cider vinegar. Thank god for El Paisa! I want to share the "good news" with all my friends and family, but a selfish, dark side wants to keep it my little secret.

El Paisa has become a weekly habit at our house. The sweet pork enchiladas are DELISH!!!! The salsa, is out of this world..
Bye Bye Chulo..
Thank you Patrick for bringing this place into my life.
Keep up the good work, you have never disappointed.

There food is so great and the price is amazing. I love that we can get my son a meal for $2 and he is so happy. Also the couple is so nice and friendly, we love it.