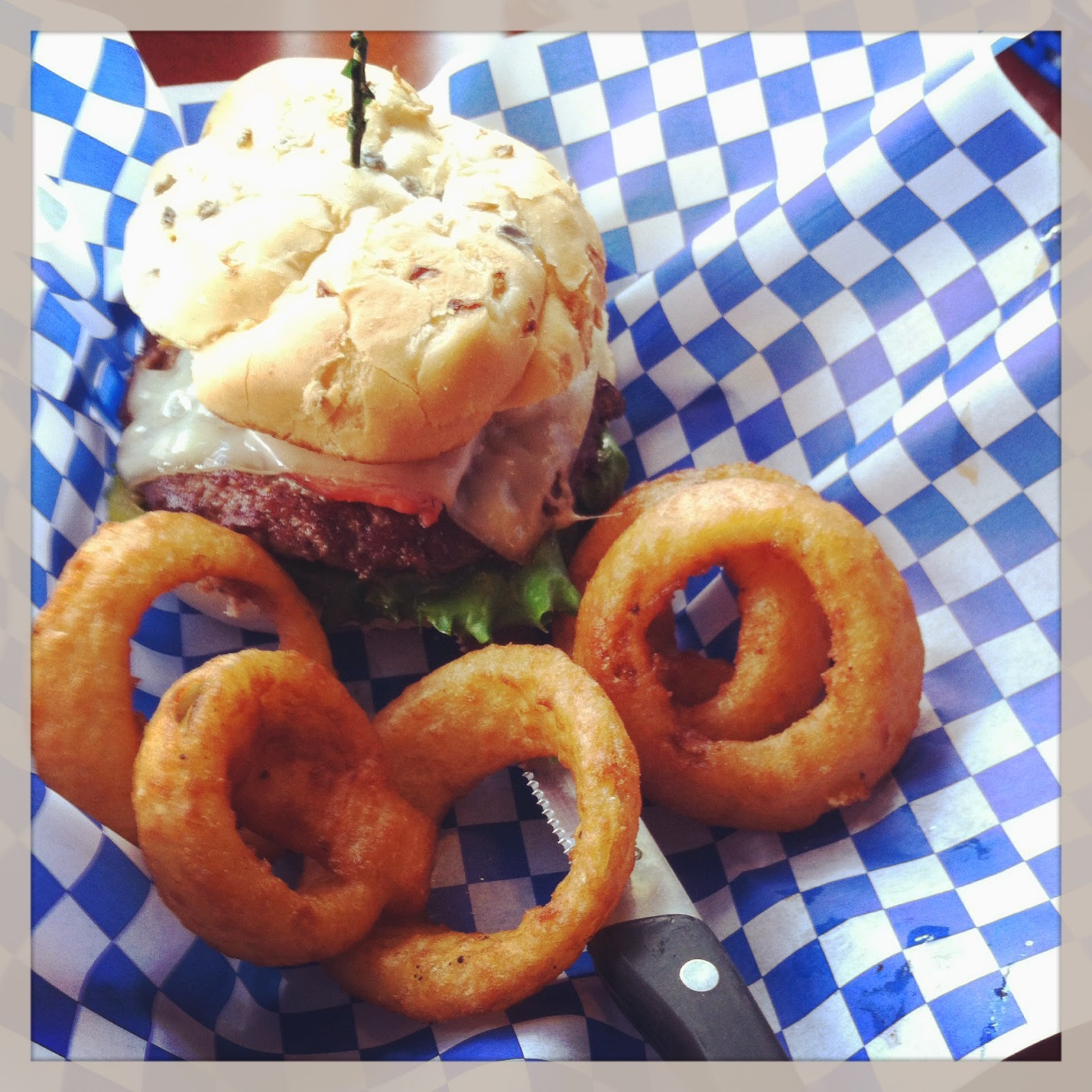 I was parked on Sherman Avenue killing some time before a business meeting, playing Candy Blast Mania on my phone (because Candy Crush is so over.) Suddenly I've got Cd'A Mayor Steve Widmyer running across the street headed my direction.

"Hey, are you still writing reviews, because I just checked out that new burger place up here and I thought it was pretty good. You ought to check it out". A week earlier, I'd had a Facebook message from longtime city councilman Woody McEvers telling me he missed my reviews. "Daaaaamn Gina" I thought as the merry mayor carried on into the morning with his business. "If the government is getting involved, I'd better get on it and start cranking out a food review or two every now and again!"

My birthday had arrived a few days later, and my dad came to scoop me up for our regular annual birthday lunch. "Did you have anywhere in particular in mind?" I asked, hopping into his truck. "Well, I was thinking about someplace new, like the Golden Corral or something." I shuddered a bit and answered, "How about 'or something'". I laid out to him the many various nightmare elements involved with navigating a newly-opened chain buffet restaurant like GC and told him the news about Schmidty's, suggesting that idea instead. And off we went.

Schmidty's Burgers hung an open sign on their front door a month or so ago in the former home of Scrud's Gourmet Grub near the corner of 4th and Lakeside. When the owners of Scrud's decided to pack their spatulas and vintage sodas and return to their homeland of Utah last fall, their many fans cried real oniony tears. Personally, I'm still kind of pissed about the whole deal. They turned us all into addicts of their jawdroppingly fabulous burgers, then despite their immense popularity, they turned their backs on their faithful junkie hordes and disappeared without any sort of legitimate excuse. I will forevermore mourn deeply for the artichoke heart, bacon, jalapeno and cream cheese/parmesan stuffed Coeur'Alene Burger. Sigh.

So, when a new burger place with a somewhat similar name opens in the same spot, it's hard not to try and compare the two. Based on my birthday visit, I can say that Schmidty's is certainly no Scrud's, but taken on its own it's a mighty fine establishment which provides an experience quite worth having repeatedly and often.

When we arrived, the room was peaceful and quiet-ish with two other tables full of lunch-goers at around 11:30 am. I like what they've done with the place so far, with the calm watery blues of a fresh repaint covering over the customer-sponsored graffiti that was starting to look so ghetto on the Scrud's walls. Otherwise not much has really changed, in fact the ancient booths here have been through at least four different tenants and could really use a little love.

The menu itself feels a little bare bones. Nine burgers are listed, including the Schmidty Burger (pepperjack, jalapenos, spicy mayo, $10.69), Mushroom Swiss (with grilled portabello, $10.59) the Grumpy Burger (American cheese and all the fixings with "grumpy sauce", $9.49), and the ultra caloriffic Hangover Burger (hashbrown patty, American cheese, fried egg, Canadian bacon, $10.79). A slider trio is available for the indecisive ($9.49), with a few salads and appetizers such as drumsticks and loaded cheese fries rounding things out. 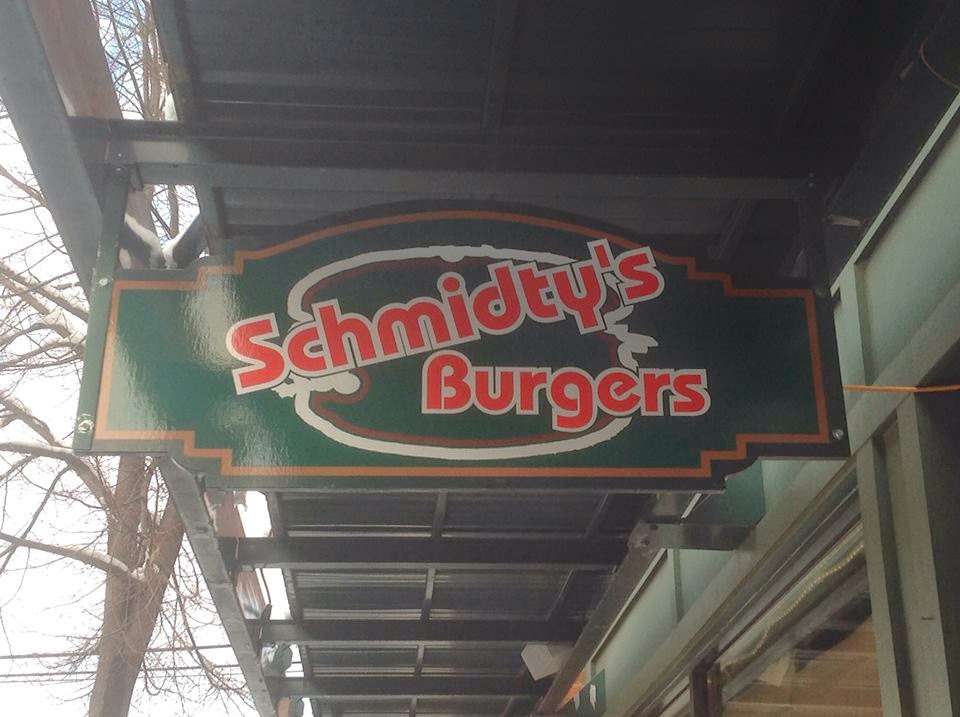 And you're probably thinking "wowee zowee, those prices are kinda high, is it worth it?" When our lunch baskets arrived at our table I was thinking the same thing. We have become so used to humongous portions these days, that when we are actually able to finish our meals without having to ask for a to-go box, we feel slightly cheated. But no, I think Schmidty's portion size was just right and we left feeling sufficiently full in our bellies and with gleaming happy taste buds to boot.

My burger of choice was the "Mrs. Schmidty's", which I ordered loudly and proudly despite the risk of emasculation. To me, it was the most interesting choice on the menu, with a sweet vs. spicy combination of pineapple, Canadian bacon, lettuce, red onion, banana peppers and Swiss ($10.69). My dad, always trying hard to watch his caloric intake (can you imagine?), ordered the basic grilled chicken burger ($8.79). We were offered our choice of three styles of bun (I can't remember the other two, but we both chose onion buns), and fries or onion rings (we both chose the latter).

The thick beef patty in my Mrs. Schmidty's was so dense with flavor, as if she'd had a wild, juicy love affair with Mr. Worcestershire or some other kind of rich, good looking guy. The bright flavor of the pineapple ring rubbed against the mild bang of the banana peppers in a singular scrumptious effort, and the melty Swiss and thin-cut Canadian bacon provided the swingin' background muzak in this elevator to burger joy. Good stuff. Only six hand-battered onion rings came along for the ride, but they were delightful and crisp, made even better by the tangy fry sauce accompanying them.

My father inhaled his chicken sandwich before I'd even gotten too deep into my basket, saying it was one of the tastiest and freshest he'd had in recent memory. He chased it with a nice cold bottle of Shock Top, one of the small selection of beers Schmidty's offers. He seemed surprised that I hadn't ordered an adult beverage myself, but it wasn't even noon yet on my birthday and I had a long LONG day/night of crazy adventures ahead of me (and it did get crazy, but I'll save those sordid details for another time).

Our waitress wasn't overly dynamic in her approach, but sometimes that's a nice way to do it, and her attentiveness and friendly attitude were tops. She brought me a nice TALL icy glass of Pepsi, which I appreciate since I don't have to worry about timing refills as much, and she had read my mind by asking if I needed fry sauce right when I was thinking "Hmm, I think  need fry sauce." At the end of it all, she attempted to upsell us a dessert (no idea what that might have been since dessert isn't listed on the menu), but there was no way. I'd initially worried about not having enough food to satisfy my gaping maw, but afterwards I don't think I could've even fit as much as a Tootsie Roll down there.

I like Schmidty's, and I may not return to visit quite as much as I did with Scrud's, but I think they will do just fine. Some restaurant or another eventually has to stay put in that seemingly cursed location, and I sincerely hope that in a year's time I'm not writing a review about whatever place moves in after Schmidty's has gone pear shaped. I want this one to stick around awhile. Mr. Mayor, you were correct. Schmidy's just might be a keeper.

Posted by Patrick Jacobs at 1:53 PM